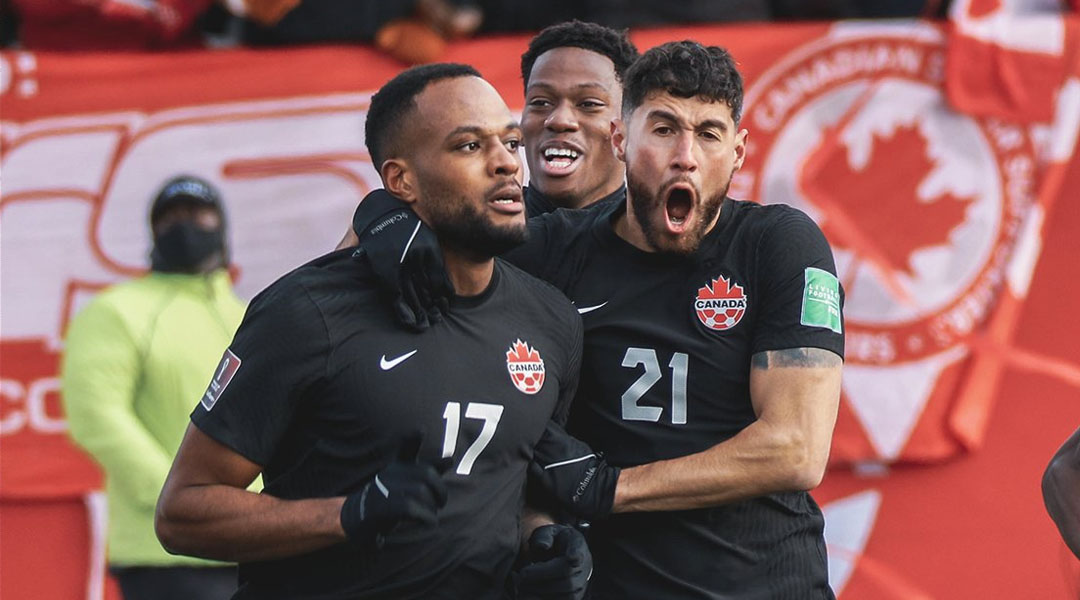 Canada Beats USA To Place Itself On Precipice Of World Cup

Canada has continued its dominance in FIFA World Cup Qualifying action, securing a thrilling 2-0 win over the United States in Hamilton, Ontario this afternoon.

The home team had opened the international window with a hearty away win over Honduras, putting in excellent performances even without core squad members Alphonso Davies and Stephen Eustaquio.

While the American visitors had the advantage in terms of shots and possession tonight, the home team put in a sound tactical performance which saw them absorb plenty of pressure and counter when the time was right.

Les Rouges would strike first blood after a quick turn of play started by Kamal Millar led to a one-two between Cyle Larin and Jonathan Osorio, with the former making space for himself in the box to fire in a right-footed effort just seven minutes into the game:

The goal cements Cyle Larin as Canada’s top all-time goalscorer, with his 23rd putting him one ahead of previous holder Dwayne De Rosario.

The United States began to build a good attacking rhythm as the first half settled in, with Herdman ensuring that Canada keptthings tight on the pitch to absorb the pressure.

The best first half chance for the visitors came in the 28th, when a half-clearance from Johnston allowed them to retake possession at the edge of the box – though nothing came of the opportunity.

Persistence from Richie Laryea on the right flank saw the full-back force his way into the box a few minutes later, with a series of blocks seeing the US regain possession before a tactical foul from Steven Vitoria ended the potential counter. The centre-back picked up a yellow for the foul, meaning he’ll miss the next match against El Salvador.

Milan Borjan then came up big to keep things level just before the first half came to a close: the 30-year-old had little time to react to a blistering header, but swatted the effort away to draw a chorus of applause from the crowd at Tim Hortons Field:

The second half was just a few minutes old when Jonathan David took on about five defenders on the counter, holding off multiple Americans to slot a ball out wide to Cyle Larin – though his cross back in couldn’t find the Lille striker.

It was no surprise to see Liam Fraser come on as Canada’s first substitute after his pinpoint pass last match, with the 23-year-old coming on to replace Mark-Anthony Kaye.

The 58th minute saw Aaronson find space for himself on the edge of the box, but the American forward fired the ball directly into the waiting mitts of Borjan.

Jonathan David then drove in a wonderful aerial ball to Buchanan moments later, with the Club Brugge forward encroaching into the box before sending in a ball that came just a little too in front of a potential Larin tap-in at the far post.

Matt Turner then kept the visitors in the game after the US gave away possession trying to play out from the back, with the goalkeeper making two consecutive stops from close range before the ball was scrambled away.

While the United States would ramp up the pressure in the final twenty minutes – with Paul Arriola narrowly missing a bicycle kick five minutes from time – Les Rouges would be the team celebrating next after Samuel Adekugbe bagged his first international goal in the final minute to secure back-to-back 2-0 home wins over the US:

Canada remains the only undefeated group in the third and final round of Concacaf World Cup Qualifying action, with Les Rouges having scored the most out of any team whilst conceding the least, too. They’ve also won their last five matches in a row.

Canada will close out its January international window with an away trip to El Salvador this Wednesday, where the right string of results could see the country mathematically qualify for the FIFA World Cup for the first time since 1986.