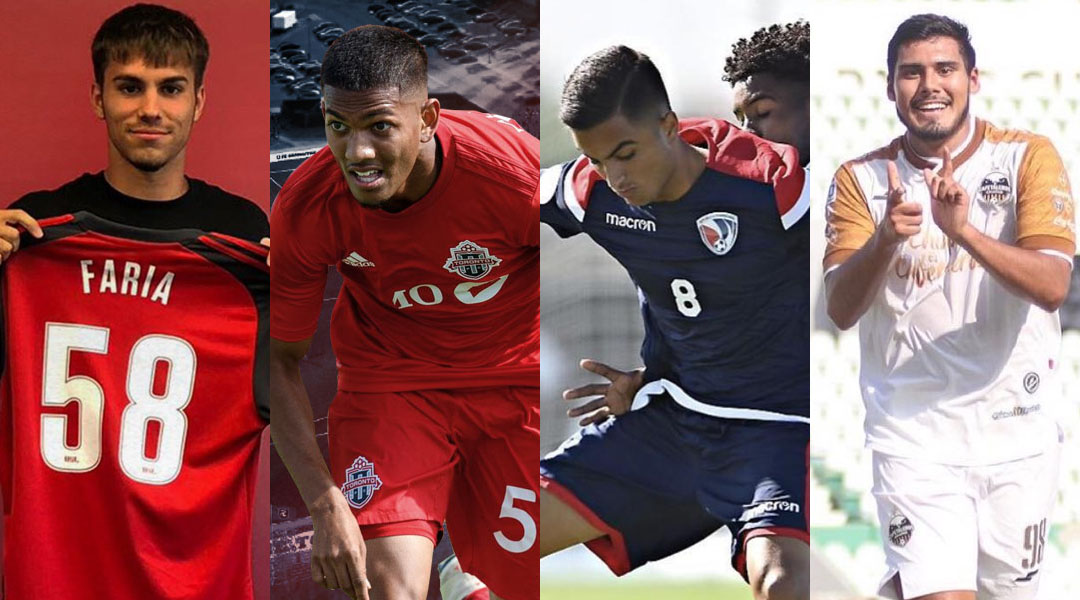 When York United Club President Angus McNab teased that new roster moves were coming, he really meant it: today, the Ontario-based club has announced the addition of four new athletes to reinforce the club’s roster amid visa difficulties for some of its foreign talent still stuck abroad.

The first new addition is 20-year-old former Toronto FC II midfielder Jordan Faria, who arrives with 32 appearances for Toronto FC’s USL affiliate under his belt already. Described as a tricky winger with good ball skills, a lot of pace, and the ability to put in a good cross, he looks an astute signing for a side which already includes other young TFC Academy graduates like Ijah Halley and Ryan Lindsay.

Faria arrives on a one year contract with an option for a further year, and has represented Canada at the U-15 and U-17 levels previously, where he played under York United’s current assistant coach Paul Stalteri.

The club is also bringing in former Toronto FC II defender Terique Mohammed on loan from Dundalk FC, which is a move that will catch many off-guard: the 21-year-old defender was spotted with Atletico Ottawa in last month, but will evidently be suiting up to reinforce the left flank of the Nine Stripes instead.

Mohammed made his Canadian Premier League debut at last year’s Island Games tournament while on loan to FC Edmonton, with the the left-back making five appearances under former Eddies boss Jeff Paulus, collecting both a red card and an assist against Valour FC on his return from suspension. Prior to that, he made 20 appearances with Toronto FC II.

The left-back area is one where York United perhaps needed the most reinforcement, with the spot having been deputized by Fugo Segawa at The Island Games to allow for Diyaeddine Abzi to return to his midfield roots. While Abzi remains on the roster, there was no other out-and-out left-back beyond the wingback capabilities of former Fluminense youngster William Wallace, who is still awaiting visa clearance.

The next two both signings will both occupy international slots, but York United is hedging its bets that athletes with US passports will have an easier time entering the country as opposed to South American signings. The first of these new arrivals is Dominican Republic national team midfielder Gerard Lavergne, a former Atletico Pantoja player who signed with USL One side FC Tucson this March but only made one appearance for the side.

Gerard is someone I looked at prior to him signing with Tucson. Any time you get a player with international experience it is positive and he was fantastic at Pantoja last season

An interesting addition with a high ceiling, he’s described as a versatile central midfielder who began his career in the Dominican Republic. Making his professional debut at the age of 16, he went on to play for local sides Cibao FC, Atletico San Cristobal, and Atletico Pantoja, where he led the side to its first Liga Dominicana de Futbol Super Cup. He has also made nine appearances for the Dominican Republic national team, most recently putting in a shift in a nil-nil draw against Serbia this January.

Lavergne arrives on a one year deal with an option for 2022 if all goes well at York Lions Stadium. As he was based in the US and holds a US passport, he is expected to have little difficulty entering Canada and will also make history as the first Dominican player to feature in the Canadian Premier League.

With an imposing six-foot-one stature and good physical attributes, Ramirez arrives on a one year contract with options for 2022 and 2023. With the Nine Stripes having struggled to create goals from open play, it’ll be interesting to see if the centre forward can make an impact during his first Canadian season.

Ozzy is a player that brings a real physical presence and represents another option for us. He’s strong with his back to goal and links play well.

With the Canadian Premier League having a maximum roster cap size of 23 and York United now having 27 athletes on the books, these moves only make sense if international signings won’t be arriving: while internationals Alvaro Rivero and Julian Ulbricht are already in Canada and Nicholas Hamilton is expected entry soon, the club has sent Lisandro Cabrera and Mateo Hernandez on new season-long loans following difficulty securing their visas.

We asked Angus McNab about the status of William Wallace and Sebastian Gutierrez, who are still awaiting their own visas. Despite Gutierrez having been the most recent international signing until today, the club has made more progress securing his visa than Wallace – though it would take the absence of all four previously mentioned internationals for today’s move to be roster compliant.

We still hold out hope that the visa situation will be resolved for Mateo, Lisandro, Sebastian, and William. But we’ve had to make moves to ensure the roster is completed so we will be ready to start the season.

The move means that York United will have a lot of roster decisions to make next year: with nine international players on the books and a limit of seven allowed, at least two will need to be cut in the assumption that their visas are all approved next year.

The prolonged offseason has seen a lot of change for the Nine Stripes, who rebranded from York9 FC this December in the midst of a roster overhaul that left only nine athletes remaining from the previous year.

With the club still awaiting permission to train and the 2021 Canadian Premier League season expected to start next month, it’ll be interesting to see how the club’s once-again-full roster performs in the months to come – or what roster decisions will be made if other internationals get their visas approved faster than expected.