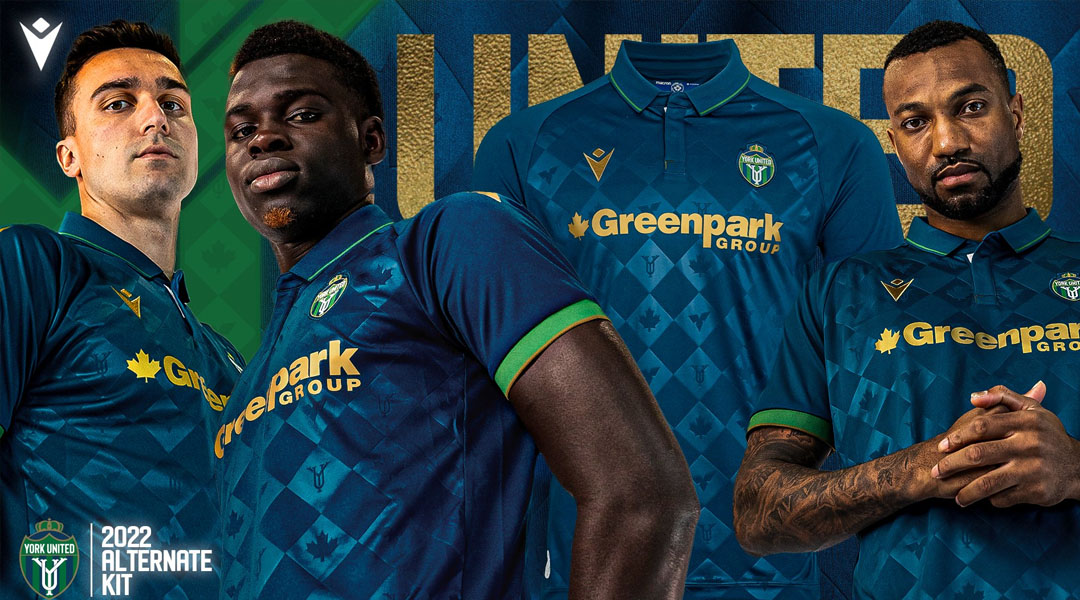 Canadian Premier League side York United has revealed a sharp blue look for its 2022 Alternate jersey.

The Nine Stripes are adopting a blue look aimed to reflect the colour of Lake Ontario, with the new kit featuring a well-incorporated maple leaf, trillium, and York United diamond pattern that takes inspiration from the North York Rockets. The nod to local sports history doesn’t end there, with the new blue look also sporting a retro-style three-button collar as an homage to the region’s previous sporting styles, too.

The 2022 Canadian Premier League kits are made from Macron Eco Fabrics, which are a 100% PET recycled polyester. For each kit produced, 13 half-litre bottles are recycled. With York United having recently named Greenpark Group as its principle sponsor, the homebuilding company now features prominently on all of its kits.

The new-look Nine Stripes side is now helmed by Martin Nash, with the core of the team now being supplemented by a string of new internationals and some sharp-looking domestic additions, too. With the club targeting a higher level of sustained success, it’ll be interesting to see how York United fairs as it kicks off a new era.

“We gave up too many chances because we were quite passive,” said Angus McNab regarding the past season. “one of the things that impressed me the most about Martin’s presentation and his vision was his desire to control the ball, and take the ball to the opposition. I think you guys will see a very different style of play from this team.”

With the 2022 Canadian Premier League primary kits having been unveiled two weeks ago, most Canadian Premier League clubs have now released their alternate looks too. FC Edmonton and Atletico Ottawa were the first to do so, with Valour FC following last week. York United’s look was unveiled at a fan-even tonight shortly before Cavalry’s, whilst Halifax, Pacific, and Forge have yet to release theirs.

York United will kick off its fourth Canadian Premier League season at home against the Halifax Wanderers on April 7, 2022.