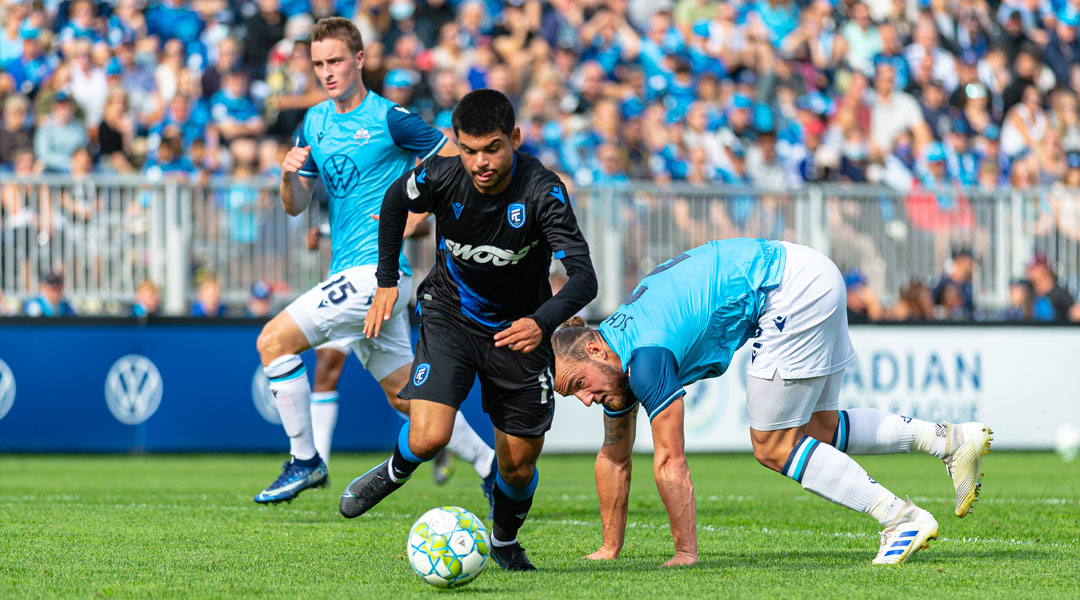 Gonzalez, 20, arrived as a mid-season loan addition to Clarke Stadium last season, where we called him one of the bright sparks of an otherwise tough campaign for the boys in blue.

“We feel fortunate to be able to get Azriel back for another season with us here at FC Edmonton,” said Alan Koch. “He came in and had a fantastic second half of the season for us last year, and we look forward to pushing him to even higher levels this season. He has the potential to be one of the top talents in the league this year.”

2017 saw the youngster handed a contract with Seattle Sounder’s USL affiliate Tacoma Defiance (then known as Seattle Sounders FC 2). The following year saw him simultaneously claim the Premier Division of the MLS Generation Adidas Cup with the Sounders FC U-17 squad, too.

All-told, the five-foot-nine midfielder accrued some 85 appearances with Tacoma, proving a danger up front with a healthy return of fifteen goals and thirteen assists. Though he arrived as a mid-season addition to Clarke Stadium last year, he still contributed a tally of five goals and three assists from just seventeen appearances.

“Azriel was a standout performer on FC Edmonton last season and his data from Tacoma is also really impressive,” explained York United’s Angus McNab of the move. “It made a lot of sense for us to keep him in the CPL and loan him over to FC Edmonton. This allows him to continue to progress in an environment he’s familiar with and I think with him being there from the start of the year and not arriving mid-season that we’ll see even more from him.”

That means York United now has ten internationals on the books, three of whom are on loan to FC Edmonton. Come the 2023 CPL season, it’ll be decision time for who stays on roster.

He becomes the fourth York United loanee of the season and the third international to arrive from the Nine Stripes, with Tobias Warschewski and Julian Ulbricht making way before Canadian defender Felix N’sa was also loaned out to Clarke Stadium.

Warchewski and Gonzalez both spent last season with the Eddies and had individually solid seasons, with the Nine Stripes now taking a chance on the duo.

FC Edmonton has now taken in nine players on loan in total, with four from York United, three from the Halifax Wanderers, and two from Toronto FC. Head coach Alan Koch disclosed that the majority of the club’s roster would, in fact, be loan talent. To help the club through its troubling times, the league has given the side an exemption from its typical cap on loans.

Gonzalez made a hefty impression last season, with former Eddies President Eric Newendorp making it clear that the club would be doing what it could to re-acquire the midfielder for another year. While the move didn’t take the shape anyone would have expected, he arrives as one of the club’s most proven talents – and an intriguing pickup for the Nine Stripes, too.