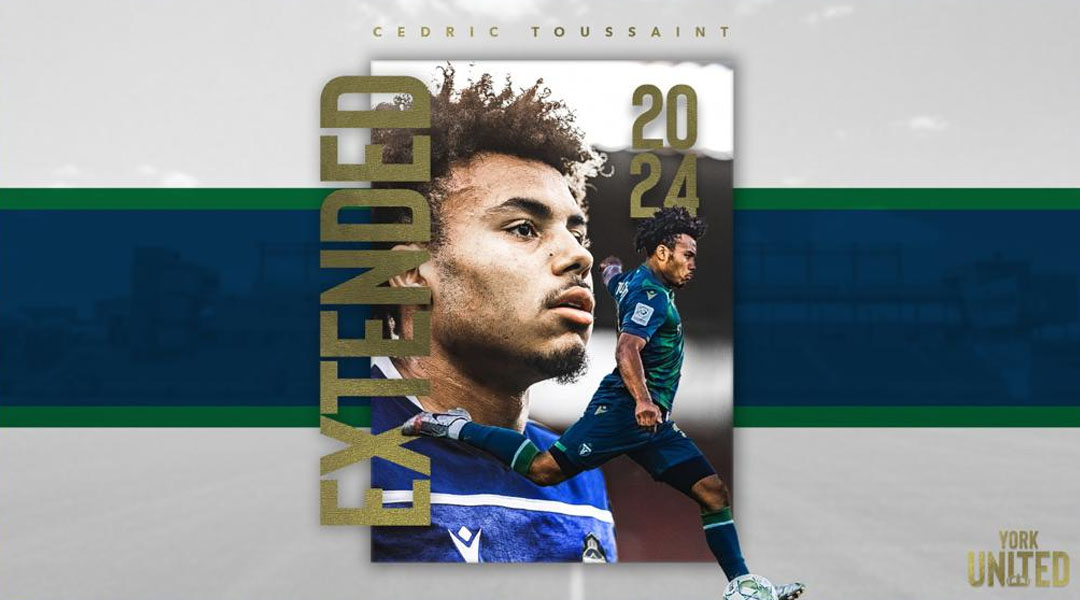 Canadian Premier League side York United has continued its string of contract extensions, announcing that midfielder Cedric Toussaint will remain with the club until 2024.

The 20-year-old midfielder had arrived earlier this year from the CF Montreal Academy, with his first season of professional football seeing him establish himself as a regular in the Nine Stripes midfield.

Toussaint has appeared in all but four of York United’s matches this season, earning sixteen league starts and making two cup appearances. Last month saw him pick up a Team of the Week nod following a successful away trip against FC Edmonton and Cavalry.

He becomes the third U-21 player to sign a multi-year contract extension before the season’s end, with Max Ferrari and Isaiah Johnston also locking themselves in through to 2024.

He has been excellent in his first season as a professional and we feel he has a really high ceiling as a player. I’ve been especially impressed with his composure on the ball this year and there was a standout moment against Pacific that really stuck in my mind: a driving run up the pitch and then a pass to Alvaro. That’s something he is capable of and needs to do more of.

The York United midfield has regularly seen Toussaint, Johnston, and Verhoeven battle for spots, with York United gaffer Jim Brennan noting that had Javier George arrived earlier, he likely would have been included in that season-long selection headache, too.

McNab, meanwhile, hopes to see the club’s core youngsters push for inclusion in the Canada U-21 and U-23 squads next year, which he says could take their careers to new heights. It remains to be seen if any of the youngsters will undergo offseason loans in the push for such.

York United leaned very young in its rebuild ahead of the 2021 season, with the club surpassing the expectations of several pundits to lock in its first-ever playoff spot. With Cedric set to miss the upcoming semi-final against Forge through yellow card accumulation, however, the re-signed midfielder will be dearly missed in the postseason.

Prior to arriving to York Lions Stadium from the CF Montreal Academy, Toussaint had also developed with CS Mercier-Hochelaga-Maisonneuve. His contract extension will see him remain with York United through to 2024. The club did not disclose the financial terms of the deal.