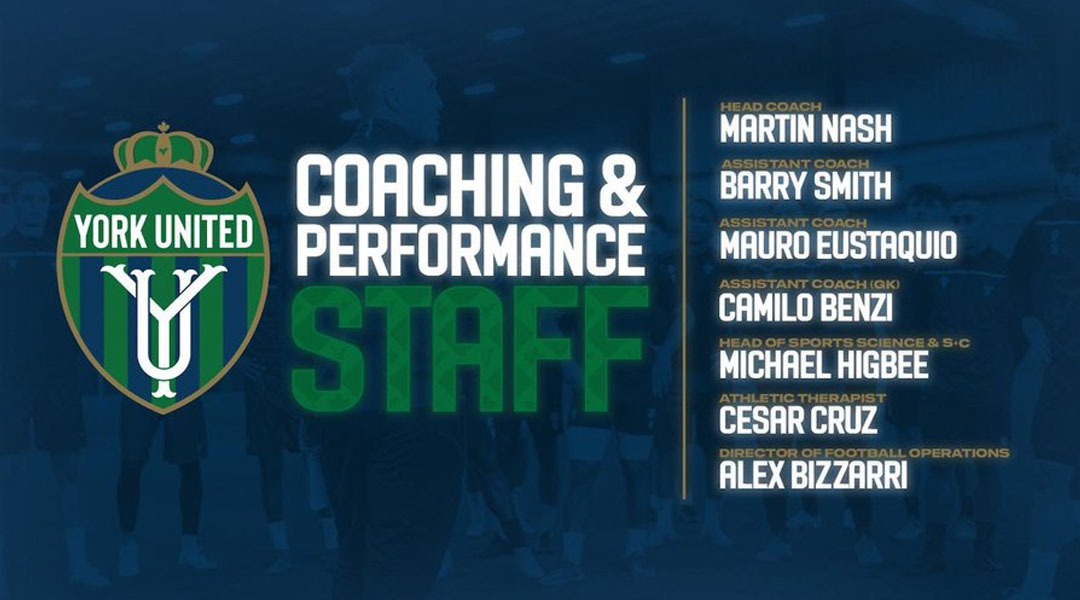 York United has revealed its coaching staff for the 2022 CPL season, with the technical area set to feature a mix of new and old faces under the new leadership of Martin Nash.

The former Cavalry FC assistant coach was named as Jim Brennan’s successor in December, and is now set to undergo his first campaign in a head coach role. The 45-year-old had previously held assistant duties with both the Calgary Foothills and Ottawa Fury before spending the last three seasons with Cavalry. He arrives to York United on a two-year deal with an option for a third.

Assisting him will be former Celtic and Dundee player Barry Smith, who most recently held a head coach role with USL side Pittsburgh Riverhounds that was stymied by travel restrictions. Since hanging up his boots in 2010, the 48-year-old Scotsman has helmed Dundee, Ross County U-20, Alloa Athletic, Aldershot Town, East Fife, Raith Rovers, Brechin City, and had assisted with Dumbarton.

His coaching career was perhaps highlighted by time he helped Dundee finish mid-table in 2010 despite the side receiving a 25 point deduction after entering administration. The former Dundee captain brings in plenty of experience from the European theatre, having helping the club to a Scottish First Division title in 1998 and leading it into UEFA Cup action during his time as a player.

I am delighted to be given the opportunity to join such a progressive club in York United. As assistant coach, I look forward to working closely with Martin, the technical staff and our special squad to help make this a successful season for all of us.

Goalkeeper coach Camilo Benzi will be remaining with the club for a fourth season. The club has touted him as a deeply-respective figure within the game, with former goalkeeper Nathan Ingham even having named him as a key reason for his own decision to stay back in 2020.

This club means a great deal to me and I’m so happy to come onboard for another campaign. It’s a very special group of players and I’m excited what we can all achieve together. It’s been a pleasure working closely with Martin [Nash] over the last few weeks of pre-season camp and I know the new arrivals will add so much to the entire coaching and performance blueprint here. It’s going to be a special year.

As has been long-known, former Cavalry FC athlete Mauro Estaquio will be reuniting with Martin Nash in an assistant coach role. After hanging up his playing boots in 2020, the midfielder took a leap into coaching to become the Development Phase Boys Manager with the Calgary Foothills, where he worked with the U-8 to U-18 age groups.

Eustaquio is a well-known face to Nash, having played under him during his time with both Ottawa Fury and Cavalry FC.

I’m excited for this opportunity and especially to be able to work – once again – with Martin Nash. We have a talented group here who are hungry for success and all together we will work hard to achieve our goals.

The club has also recruited its new Head of Sports Sciences from Swansea City, where Michael Higbee previously worked at the academy level. The Loughborough University graduate earned his master’s degree in strength and conditioning from the University of Edenborough, and previously worked with Championship side Birmingham City before most recently operating as Swansea’s Lead Academy Sport Scientist.

Getting to play such a crucial role and being involved in the development and future successes of the club is a genuine thrill. I’m looking forward to collaborating with the technical staff and working with such an impressive group of players.

The Nine Stripes have also named Cesar Cruz as the club’s athletic therapist, while Alex Bizzarri’s third year with the team has seen him promoted to Director of Football Operations – a marked rise for an enthusiastic team member who was an intern just three years ago.

Described by Angus McNab as ‘the heartbeat of the club,’ he also got a nice shout out from Inter Miami’s Sam Gregory, who previously worked with the Nine Stripes throughout 2020’s Island Games tournament.

The new coaching staff will now take the Nine Stripes into what Club President Angus McNab hopes will be an era of sustained success. With Jim Brennan now departed and Paul Stalteri having been recruited by Toronto FC, it’ll be interesting to see what comes next.

With Camilo Benzi, Mauro Eustaquio, and Cersar Cruz all fluent in Spanish, the diversity of the coaching staff will certainly help the club’s international contingent settle in with a team expecting to make a playoff push in the 2022 CPL season.

I feel we have assembled a fantastic group that will get the very best from our players and will work well with Martin also. Barry has coached at the highest levels of Scottish football and his experience as a Head Coach will be valuable for Martin too. Mauro is well-respected as an up-and-coming Canadian coach and he obviously knows both the league and Martin very well. Camilo has done a great job with our goalkeepers over the first three CPL seasons and I’m delighted he’s back.

York United will kick off the 2022 CPL Season at home against the Halifax Wanderers on April 7, 2022.