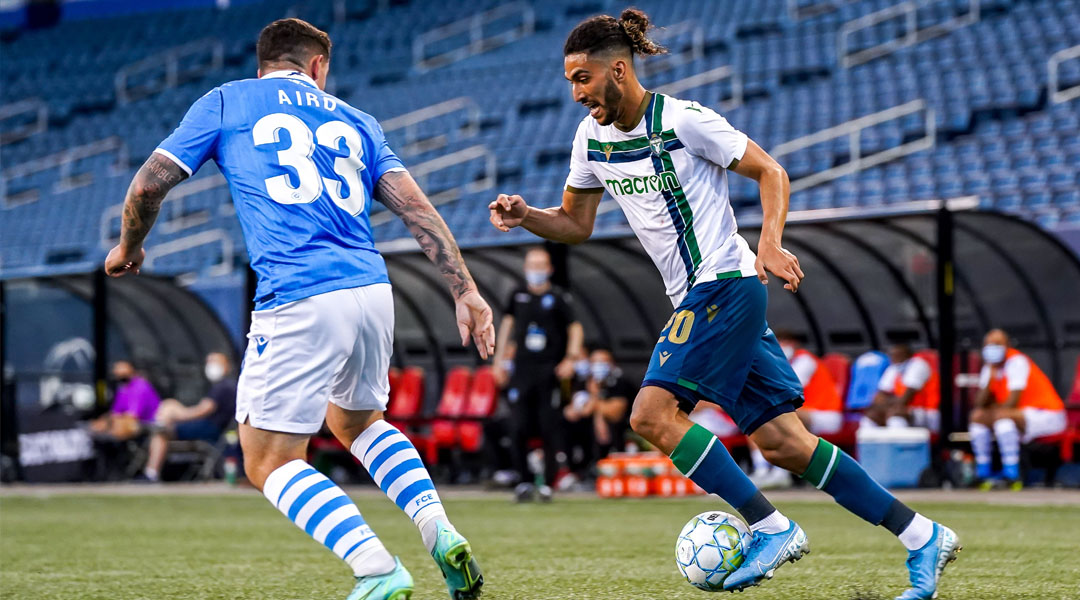 The 23-year-old left-back has been a staple figure in the Nine Stripes roster ever since arriving from AS Blainville in 2019. He now departs to Europe as the club’s all-time appearance leader and one of the league’s most impressive left-backs.

“We got to a situation where multiple clubs were showing interest but this was the move that he Abzi really wanted,” said York United President Angus McNab. “It was then on us to come to an agreement with Pau.”

While the full financial details of the transfer weren’t announced, York United has confirmed that the deal involved both a transfer fee and a 25% sell-on clause should the left-back move on from Pau in the future.

The midseason move to Europe will come as a surprise for many fans, especially given that Abzi had gone public with his Major League Soccer aspirations in the past. Toronto FC had wanted to trial the defender earlier this year, though a small knock saw him pass on the opportunity.

York United fans will have a chance to say farewell to the star left-back, who will remain with the side for the club’s next to matches. This will see him remain on the roster for a league match against Pacific followed by a Canadian Championship cup tilt against the Vancouver Whitecaps.

The Morocco-born athlete developed in Montreal and developed with Quebecois side Salaberry before transitioning to AS Blainville. With the arrival of the CPL, he was recruited by the Nine Stripes and transitioned into a full-back role from his previous midfield position.

It didn’t take him long to explode onto the scene, with his first professional season seeing him accrue some thirty appearances, contributing one goal and four assists. After impressing in the shortened Island Games season, he earned a Canada U-23 nod and made his international youth debut against Mexico.

He remained integral to the club under Jim Brennan’s final season in 2021, racking up 28 appearances and finished as the club’s joint top-goalscorer after a six goal season. This year has seen him feature nine times for Nine Stripes, with two more appearances now set to come.

Pau earned promotion into the French second tier in 2020, finishing tenth in league standings last year. The mid-table side will be a great test for a CPL talent who had other offers on the table.

“Abzi has shown what this league is all about,” concluded McNab. “A young player was presented with a platform and handed an opportunity that he’s harnessed and really made his own. Now we see him move to an illustrious football nation and into one of the most scouted leagues in world football.”

Abzi was always a CPL talent that many had expected to move upwards, so it’ll be interesting to see how the full-back fares in a competitive European division like Ligue 2.

York United currently sits seventh in league standings, though it has best defensive record in the league.