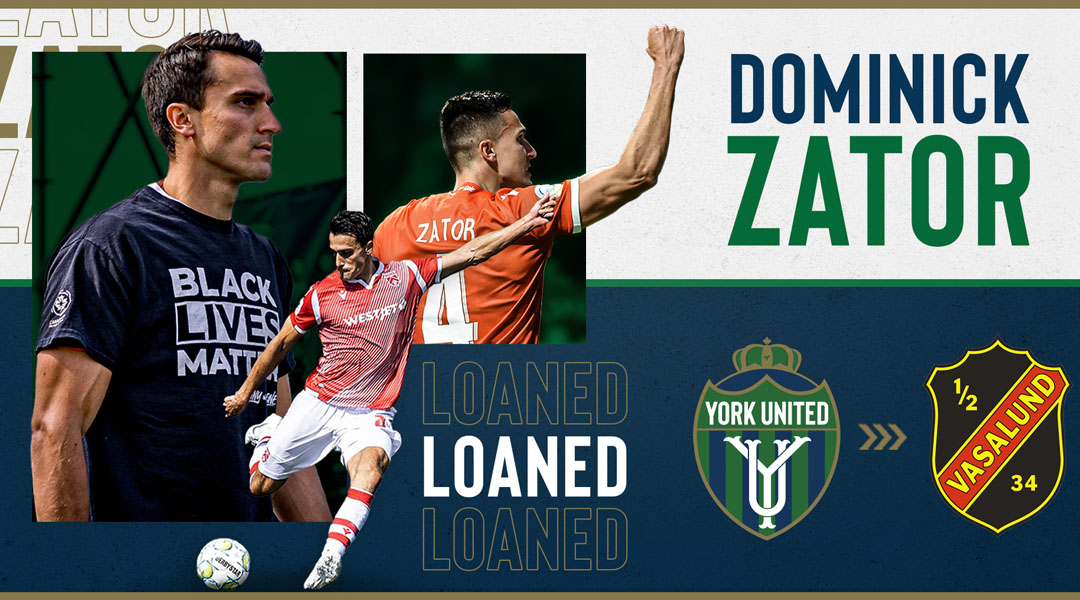 Yesterday York United announced one of the biggest intra-league transfers the league has ever seen, with Cavalry FC stalwart Dominick Zator joining The Nine Stripes on a two-year deal.

Today, the Canadian Premier League side has announced that Zator has been loaned to Swedish Superettan side Vasalunds IF until the Swedish mid-season break in June.

Based in Stockholm, the club achieved promotion from the Swedish third tier in 2020 and is preparing for its first Superettan season in eleven years. While that won’t kick off until April, the club is in the midst of several high-profile friendlies that recently included a 2-0 victory over top flight side AIK Fotboll.

In the York United press release, Club President Angus McNab states that Zator will be hoping to hit double-digit appearances for the Swedish side between now and his Nine Stripes arrival, which should see the six-foot-two defender arriving to York United fully battle-tested and in good form:

When recruiting Dom, I promised to do everything in my power to help with his aim of getting back in the senior Canadian squad. Right now, the way we can do that is by making sure he’s playing games of a high standard and making sure he has opportunities to showcase what he can do.

York United states that Zator will return to the side in the summer, with McNab telling the Northern Tribune that he will likely miss the first few games of the Canadian Premier League season if the league holds firm to its tentative start date of the Victoria Day Long Weekend.

The Swedish Superettan holds a midseason break after June 22, which would be the most logical window for Zator to fly to Toronto and establish himself within the York United setup. The end of the summer month will also spark the return of on-loan players Michael Petrasso and Nicholas Hamilton.

I’d also like to pay special thanks to Vasalunds IF and their Sporting Director, Chengis Rehman. They have been fantastic to deal with and we know they will be taking great care of Dom in Sweden. He’s got an opportunity now to show what he can do over there.

For his part, Rehman states that the Swedish side was delighted to work with York United and secure the services of Zator for the upcoming months. The 26-year-old could see action for the side as soon as next week, with Vasalunds set to square up against top flight side Djurgardens IF in a friendly match.

Zator arrives as one of the most established Canadian Premier League defenders, with the 26-year-old having made 47 appearances for Cavalry FC over the last two seasons. Last year saw him complete an iron man campaign at The Island Games, lead the league in terms of passes completed, and prove to be a key asset both as a defender and on attacking set pieces.

Only a handful of Canadian Premier League players were able to secure offseason loan moves during the COVID-19 pandemic, with Zator stating that York United’s ability to secure him a loan move to Sweden was a big part of his decision to sign for the team.

This loan played a pretty significant factor [in moving to York United] because it gives me the opportunity to play extra games and the biggest thing for players is playing as many games as you can in a year. With what’s happening around the world, there are different ways we have to adapt and fortunately I’m able to make this step forward to Sweden – which is crucial for the national team and things like that.

With Vasalunds IF having just sold 17-year-old forward Benjamin Tahirovic to AS Roma, there’s indication that the club appears to be a good place for Zator to showcase himself and, as he says, force his way back into the national team setup.

His comments may also explain why Cavalry FC gaffer Tommy Wheeldon Jr. had stated that Zator wanted to pursue overseas opportunities following his departure from the Alberta-based side just before it was revealed that he had joined The Nine Stripes. It also shows just how important it is for clubs to be able piece together off-season loans for their players.

Following the signing of Zator yesterday, York United only has one roster spot remaining for the 2021 Canadian Premier League season. The financial details of his contract were not disclosed by York United.