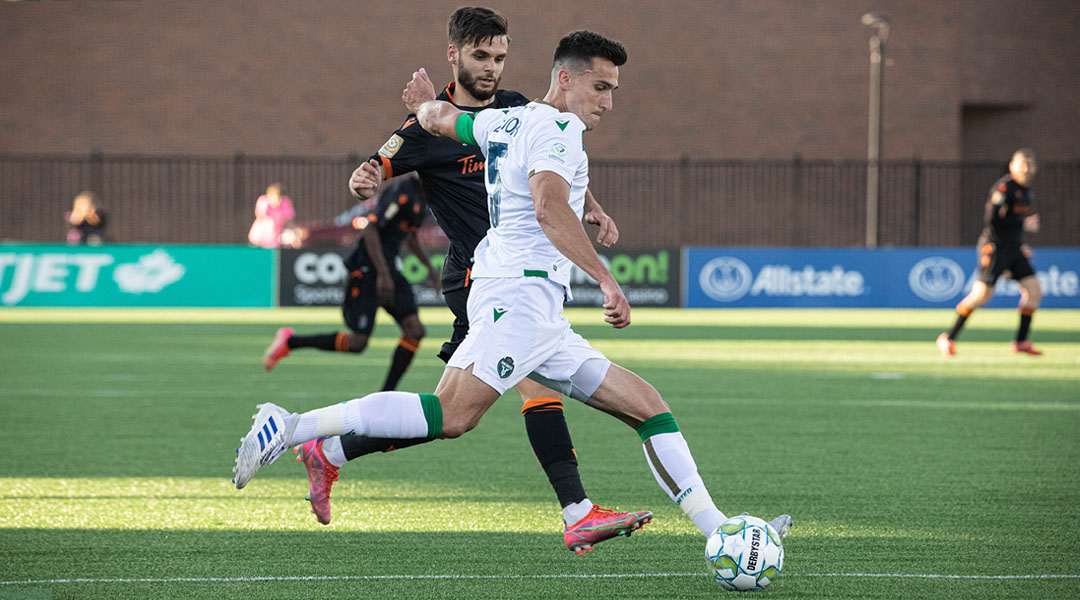 York United centre-back Dominick Zator will be available for tonight’s 905 Derby match against Forge FC after the successful appeal of his red card suspension.

The Nine Stripes defender was sent off in the 41st minute of the club’s home opener last Friday, with the six-foot-two defender getting marching orders from referee Yusri Rudolf after a challenge on Tristan Borges. With fans now allowed in the stands, the decision drew jeers from the crowd.

York United had sent an appeal to the Canada Soccer Disciplinary Committee, who have now come to the conclusion that Zator’s actions did not deny a goalscoring opportunity for the Forge forward, with his red card suspension now being withdrawn as a result.

In the post-game interview, head coach Jim Brennan had firmly stated that he thought the red card was a bad call from the official, with the talking point also bringing forth a comment from former Cavalry forward Nico Pasquotti, who tweeted that Borges should have received a yellow for simulation.

Forge’s Tristan Borges has seen himself on the other end of this in the past, with a previous red card suspension having been withdrawn ahead of the second leg of the 2019 CPL Final.

Referee Yusri Rudolf has handed out three red cards over the past three years, giving Terique Mohammed one in last year’s Al Classico and Jan-Michael Williams a rare goalkeeper sending-off in 2019. Neither of those cards were overturned, or potentially even appealed.

Zator has played in six of York United’s nine matches so far, having missed a handful of the club’s matches in the Winnipeg-based bubble through injury. In the bubble, the club has an average of 1.2 goals against when he was on the pitch versus 2 when he wasn’t, with the former Cavalry defender putting in strong shifts following his loan to Swedish side Vasalunds IF.

He arrived on a multi-year deal this February after spending the last two seasons cementing himself as a league-leading defender with Cavalry FC.

His return will be a big boost for York United ahead of tonight’s 905 Derby, especially since the club is lacking bodies at the back: team captain Roger Thompson is expected to remain sidelined for a little while longer, while young centre-back Ryan Lindsay has yet to enter the lineup after missing the bubble for an undisclosed medical reason.

Jordan Wilson filled in as a centre-back on Friday, which is a position he’s had to frequent throughout the season thus far. Chrisnovic N’sa can cover there as well, though Nine Stripes fans will be happy to see a natural centre-back like Zator slot into the position instead.

York United will take on Forge FC tonight at Tim Hortons Field, which will see fans in the stands for the first time since October 2019. This league match was pushed forward to allow for an extended Concacaf League away trip for the reigning champions.