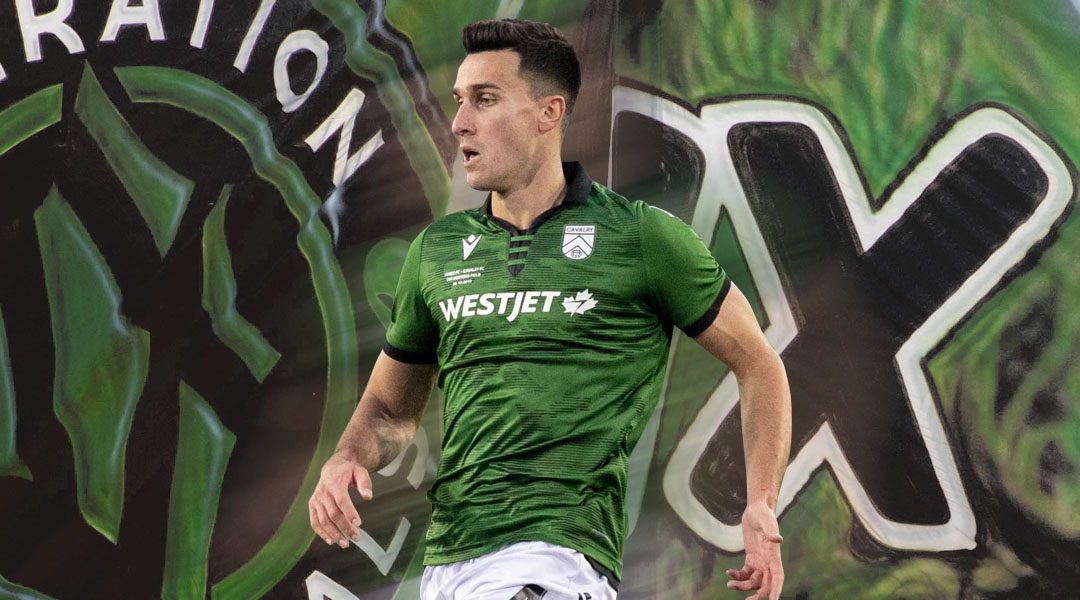 In one of the biggest intra-league transfer moves of the 2021 Canadian Premier League season, league-leading defender Dominick Zator has signed for York United after turning down a contract offer from Cavalry FC.

Zator has proven himself to be a top Canadian Premier League centre-back over the past two years, making 47 appearances for Cavalry FC and proving to be a rock at the back and a big danger on attacking set pieces.

Zator arrives following an iron man season for the Alberta-based side, where he scored the first goal of the tournament against Forge FC and led the league in passing with 675 over ten appearances. We named the 26-year-old the club’s best returning player at the time, with the Calgarian further cementing his position as one of the top defenders in the league.

I think Dom is a phenomenal addition to the roster and we are delighted to welcome him to the club. He’s really been a stand-out performer in the league and I honestly feel we are all very fortunate that he’s chosen to continue his career here at York United.

The inaugural Canadian Premier League season saw Zator make 37 appearances across all competitions, scoring three goals and providing three assists while overseeing a Cavalry FC defense that conceded the least goals out of any CPL side. Following that, OneSoccer had surmised that he would’ve won a defender of the year award if it existed.

A proven offensive threat on set pieces, one of his goals also made Canadian soccer history: his match winner against the Vancouver Whitecaps led to the first and only time a CPL team has beaten MLS opposition. In 2019, Zator’s fine form earned him his first call up for the Canadian national team ahead of a high-profile match against the USA, with McNab noting that the club hopes to be a springboard to his first full cap.

I want to see as many squad members as possible involved in the international game. Dom has had a taste with Canada before but is still to get his first cap. It’s our job as a club to provide the opportunity, environment and consistency that players need to perform. If Dom performs then opportunity will come his way.

The Club President had revealed in December that his side had significant salary cap space to use on its last two signings, with Zator almost certainly arriving with a significant pay bump. When his departure from Cavalry FC was announced, head coach Tommy Wheeldon Jr. had stated they’d tried to negotiate an offer, but Zator evidently found a better one with York United.

Earlier this offseason, the six-foot-two defender was rumoured to have been close to a Championship loan move, though this never came to fruition. At the moment, it’s unclear whether the club will loan him out or simply have him come in for preseason this March. Cavalry FC had stated he was pursuing European options last week.

At the present, York United has two players on loan overseas: Michael Petrasso with Barnet, and Nicholas Hamilton with Dundee FC.

In a press release from the club, Zator states that he believes his high-profile intra-league move to York United was the right choice for his career, stating that his initial discussions with Angus McNab left him feeling confident in the plan set forth for him come 2021 and beyond.

It was the right move at the right time in my career to take that next step. It’s about seeing if you can adapt to new changes and if you can succeed in a different environment and having those conversations with Angus resonated with me. I’m excited to be part of the York United family.

The York United roster in the midst of a significant overhaul, with nine players having departed following The Island Games. In defense, the club saw iron man Luca Gasparotto retire following a stall in contract negotiations, while full-back Morey Doner terminated his contract before being picked up the Halifax Wanderers shortly after.

The club has retained defenders Diyaeddine Abzi and Roger Thompson, who will be joined by CPL U-21 Player of the Year Chrisnovic N’sa along with his brother Felix and former TFC Academy defender Ryan Lindsay. In a pinch, centre midfielder Jordan Wilson can also help in the centre-back position, too.

Cavalry FC, meanwhile, has brought in Dutch Daan Klomp to replace the outbound Zator. The centre-back can also slot in on the right if needed, too.

With York United having used all but one of its roster spots, it remains to be seen if any of the side’s 2021 CPL-U SPORTS Draft picks will crack the club’s youngest-ever roster, which currently has an average squad age just of just over 22.

The financial details of Zator’s contract were not disclosed by York United. The six-foot-two defender arrives to York Lions Stadium on a two-year deal.