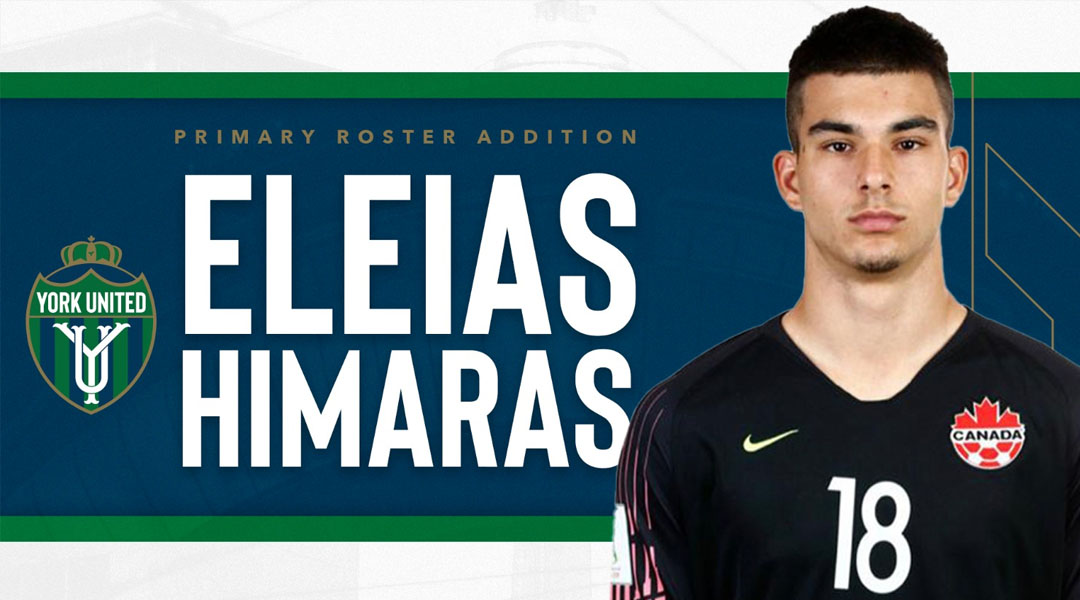 With York United’s Nathan Ingham suffering a groin injury in the 905 Derby against Forge a few days ago, the club has now announced that it is bringing in former TFC Academy athlete Eleias Himaras on a short-term deal.

The 19-year-old emergency goalkeeper is expected to serve as a backup option for Nikolas Giantsopoulos, who came on in the second half against Forge FC and will be the expected starter against the Halifax Wanderers this weekend.

Himaras joined the Toronto FC Academy in 2018 and stepped into the Canada U-17 national team a year later. Most recently, he appeared for League1 Ontario side FC London. In the club’s home opener, he already faced some former CPL competition against expansion side Guelph United.

Himaras was a regular with the Canada U-17 national team in 2019, travelling with the squad to the FIFA U-17 World Cup in Brazil and making his debut against New Zealand. That match saw him play alongside a handful of other athletes currently on loan in the league, like Keesean Ferdinand and Sean Rea.

He was also with the U-17 team that travelled to see York9 FC (now York United) take on Montreal in the Canadian Championship, where he saw a few of his new teammates in action.

This will mark his first club football back in a professional environment following his time with the TFC Academy, where the Nine Stripes have recruited other youngsters like like Lowell Wright and Ijah Halley. York United currently finds itself fifth place in league standings, recording one win and one loss since exiting the bubble.

The FC London youngster will remain with the club on a week-to-week basis as Ingham recovers, which offers him a good chance to impress during training.

Eleias is a player we’ve been chatting about for a while and had hoped to have him in to train with us following our return from Winnipeg. It’s a good opportunity for him to see what we are about and get some work done with Camillo and Niko up in Halifax.

Last year saw the Nine Stripes rely on a teenage third choice goalkeeper at The Island Games, where 17-year-old goalkeeper Ezequiel Carrasco made his professional debut against the Wanderers. He was released at the end of the 2020 season.

The full details of Himaras’ short-term contract with York United were not disclosed by the club.