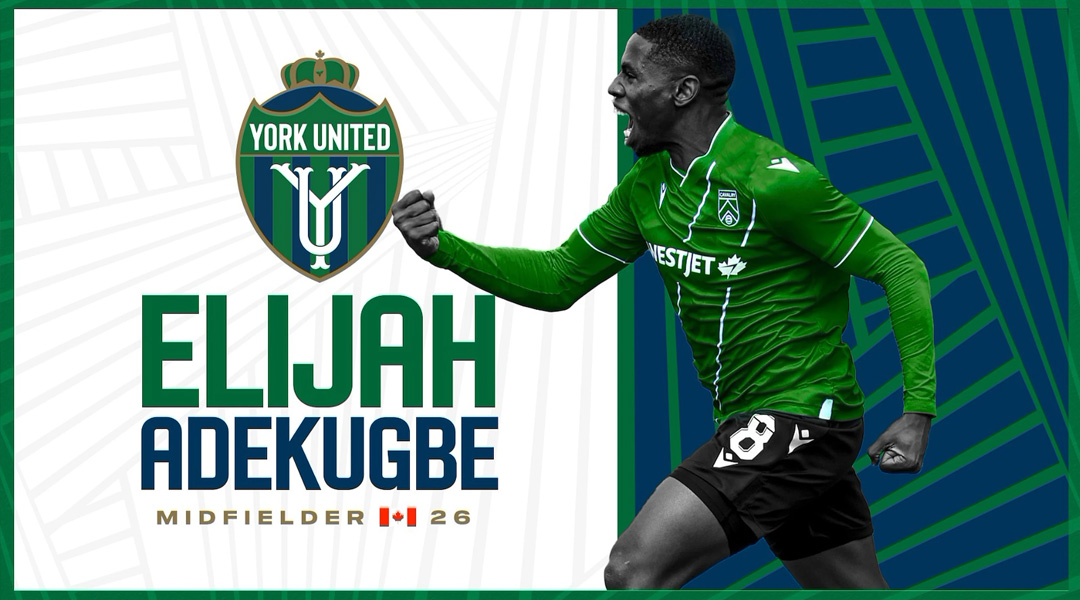 The 26-year-old arrives to York Lions Stadium on a two-year deal, reuniting the midfielder with head coach Martin Nash and assistant Mauro Eustaquio, both formerly of Cavalry FC.

It was there where Adekugbe made 55 appearances for Cavalry across all competitions, contributing three goals and five assists before departing from the side earlier this month. Kudos to the readers who caught our mention he was set for an intra-league move to Ontario, by the way.

“I got to live a dream in my hometown and for that I’m grateful,” said Adekugbe about leaving Alberta. “Thank you Cavalry, you turned a boy into a man and gave me my start on this journey. But all good things come to an end. I appreciate everyone that supported me during my time with the team, but now it’s time for change, more growth and new inspiration.”

The 26-year-old did well to bounce back after an Achilles injury sidelined him for the entire 2021 campaign, bouncing back this season to make 22 appearances and bag a matchwinner over Valour.

“It’s a new challenge, it’s a new chapter and I’m super excited to announce it. It’s a big change,” Adekugbe revealed to Andi Petrelli on CBC’s Soccer North show earlier today. “Obviously, I’ve been in Calgary my whole life but it’s a new setting, a new inspiration. The hunger is still the same and even coming to Qatar and watching my brother play has inspired me even more to keep continuing on my own path and be the best version of myself.”

Adekugbe also thanked a number of York members for the opportunity, including Club President Angus McNab, who himself revealed that he’s had eyes on Elijah for a number of years now. Martin Nash also labels him as a leader and a technical midfielder who can dictate the tempo of matches.

It will mark Elijah’s first time playing professional club football outside of Calgary, where he had developed with the Calgary Foothills before transitioning to Cavalry FC upon its launch in 2019. Prior to that, he had spent time with the Vancouver Whitecaps Academy.

York United had brought in Cavalry attacker Oliver Minatel this year, though the 30-year-old opted to retire after recurring injuries sidelined him for the most of the campaign. The club had a tough go regarding injuries in 2022, and will be hoping Elijah will clock in with a clean bill of health.

Elijah Adekugbe has inked a two year deal with York United, with the club teasing that new signing announcements will be coming soon. The club also announced that it had re-signed Austin Ricci last month.