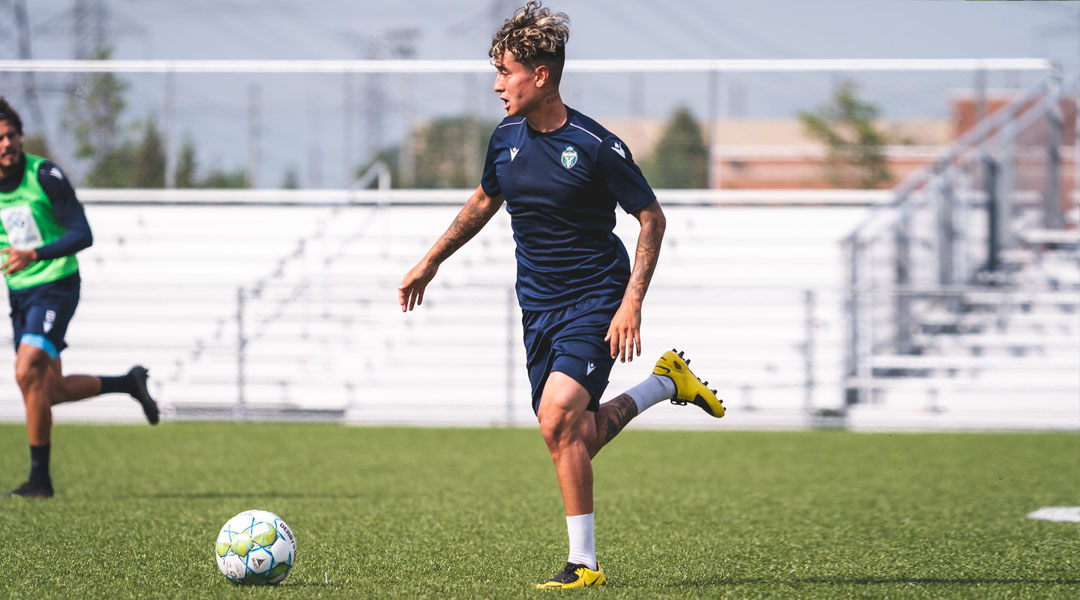 A familiar face has returned to training with York United: Emilio Estevez.

Both the club and the player confirmed his training stint back with the Nine Stripes comes as a way for him to stay fit ahead of international duty for Taiwan, though some CPL fans will be hoping that it could lead to more flashy footwork closer to home.

The 23-year-old Taiwan international was part of the inaugural Nine Stripes roster, with his rookie campaign in the CPL seeing the youngster make 18 league appearances and score his first professional goal in 6-2 win over the Halifax Wanderers.

While his technical abilities impressed at the league level, it was his performances on the international stage that really turned heads: after providing some fancy footwork for Taiwan in a loss against Australia, the then-21-year-old found himself the target of a bid from Dutch top flight side ADO Den Haag.

York9 FC (now York United) made the decision to sell the midfielder for an undisclosed fee. His first professional stint abroad proved a tough experience, with Emilio eventually leaving ADO Den Haag this January without having made a single first team appearance.

He then joined Spanish fourth tier side Ourense CF, but returned to Toronto more recently. While he states he’s simply training with York United for now, it gives the Canadian Premier League side a significant opportunity to see where Estevez’s playing levels are at after two seasons abroad.

Emilio had developed with local youth clubs in Etobicoke and Mississauga before first venturing abroad as an 18-year-old to train with Levante reserve sides, completing a short week-long trial with Queen’s Park Rangers before ultimately returning to Canada.

Prior to impressing York United at the 2018 Got Game Open Trials, he had also plied his trade for the Sheridan Bruins along with League1 Ontario’s North Mississauga SC and the CSL’s SC Waterloo Region. He made his debut against Cavalry FC on May 4, 2019.

York United will be shuffling its roster in the near future regardless of Estevez’s status within the club, with Colombian forward Sebastian Gutierrez completing his quarantine process after a lengthy visa delay. With the roster already full, an existing player will need to make way for Sebastian to get rostered – and a similar scenario would unfold if Estevez was to return.

Estevez is expected to travel with the Taiwanese national team for its Asian Cup Qualification playoff match against Indonesia on September 7, 2021.