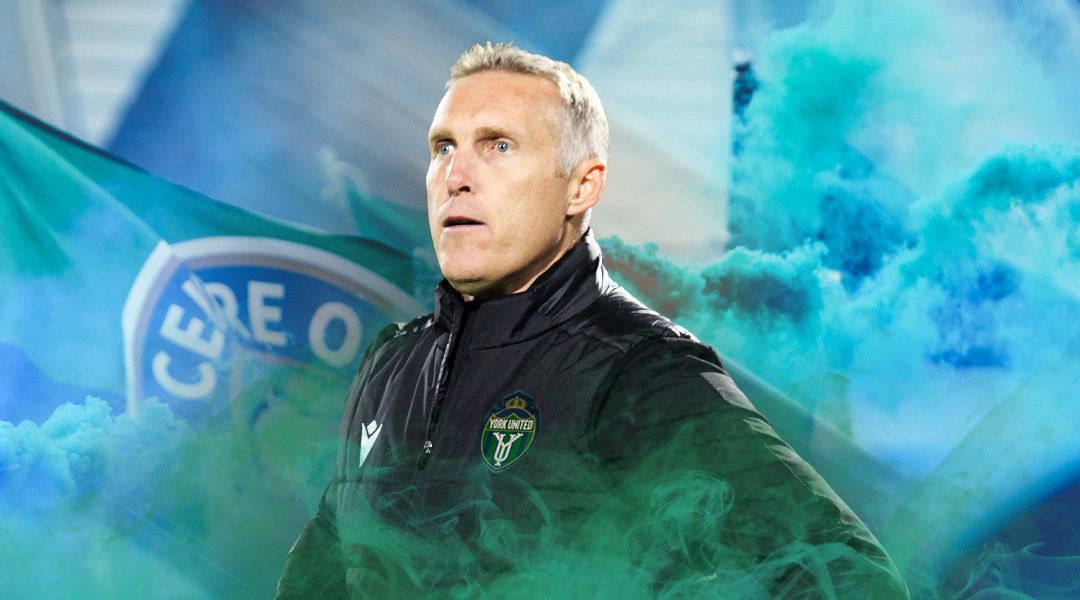 The 45-year-old arrives after spending the last three years as Cavalry FC’s assistant coach and technical director, with Nash also previously holding assistant coach roles with both the Calgary Foothills and Ottawa Fury before that.

The former Whitecaps midfielder now begins his first-ever head coaching stint on a two-year deal with a club option for a further twelve month extension.

I am honoured and extremely excited to join this incredible organization and to become an active member of the York United community. I’m hugely grateful to The Nine Stripes for affording me this opportunity and I genuinely can’t wait to get to work. We have a dynamic and talented group of players who are hungry to win and I look forward to starting with them on the training ground.

Nash – who had once been linked with Pacific FC prior to the club’s acquisition of Pa-Modou Kah – has always been quite public with his aspirations to land a head coaching role in the CPL, telling OneSoccer last year that he had always wanted to progress if the right opportunity came along.

It appears there won’t be any bad blood between Cavalry FC and York United after Nash made the switch, with McNab extending a special thanks to Cavalry’s Ian Allison and Tommy Wheeldon Jr. for their openness and support for the move.

Prior to coaching, Martin Nash had a fifteen-year playing career that saw him play in the US, Canada, and England, with Nash winning the USL twice with the Vancouver Whitecaps and retiring when the club transitioned into Major League Soccer. He made 38 appearances for the Canadian national team, and was part of the 2000 Gold Cup-winning squad alongside Paul Stalteri.

He spent three years as an assistant coach with the Ottawa Fury before joining former CPL staffer Michael Findlay with the men’s national team on an interim role. He joined Tommy Wheeldon Jr. at Cavalry FC after that, helping guide the side to a PDL Championship in 2018 before transitioning to Cavalry FC with the launch of the CPL.

York United’s search for a head coach had not been expected to conclude until the new year, with Angus McNab having previously narrowed down some thirty notes of interest into ten candidates, half of whom were domestic. Carmine Isacco got a lot of public support from several professional athletes, while Brazilian coach Alexandre Gallo was also rumoured to be one of the candidates.

McNab thanked the applicants for their time, but stated Nash was the candidate who showed the most cohesive direction on how to take the club forward. Like McNab, he also believes in a holistic approach between the combination of coaching and data.

In the lead-up to today’s announcement, the Nine Stripes made their ambitions for the new gaffer pretty clear: they want sustained success with an eye on qualifying for continental competition. Beyond that, McNab hopes that the new head coach will be able to instill an on-field identity of high-tempo, free-flowing football that will draw more fans in to York Lions Stadium.

“I like to play front-foot football,” he confirmed at today’s press conference, “and I think that this team can dictate the terms on the pitch.”

The first two seasons of club football saw the side miss out on any kind of postseason, with a restructured and young-leaning squad surpassing expectations this year to lock in a playoff position for the first time ever. The side was quickly dispatched by rival side Forge FC in the semi-finals – the third consecutive loss against them to close out the season – and that also marked the end of Jim Brennan’s tenure with the club.

Northern Tribune has learned that goalkeeper coach Camilo Benzi will remain with the side, though it remains to be seen whether assistant coach Paul Stalteri will remain on as assistant coach. The full technical staff roster is expected to be fully sorted in the new year.

York United will also be releasing a formal roster update later this week. The CPL side recently confirmed that it had exercised its options on Chrisnovic N’sa and Jordan Wilson, while also adding youngster Mamadou Kane and confirming the departure of Nathan Ingham.

The club also noted that it was finalizing some international signings, lending credence to the longstanding rumour that former Czech Republic U-21 forward Martin Graiciar was en route to the side.

Of course, how Martin Nash opts to help shape the team remains to be seen.

Nash becomes just the second-ever York United head coach, signing on a two-year deal with a club option for 2024.