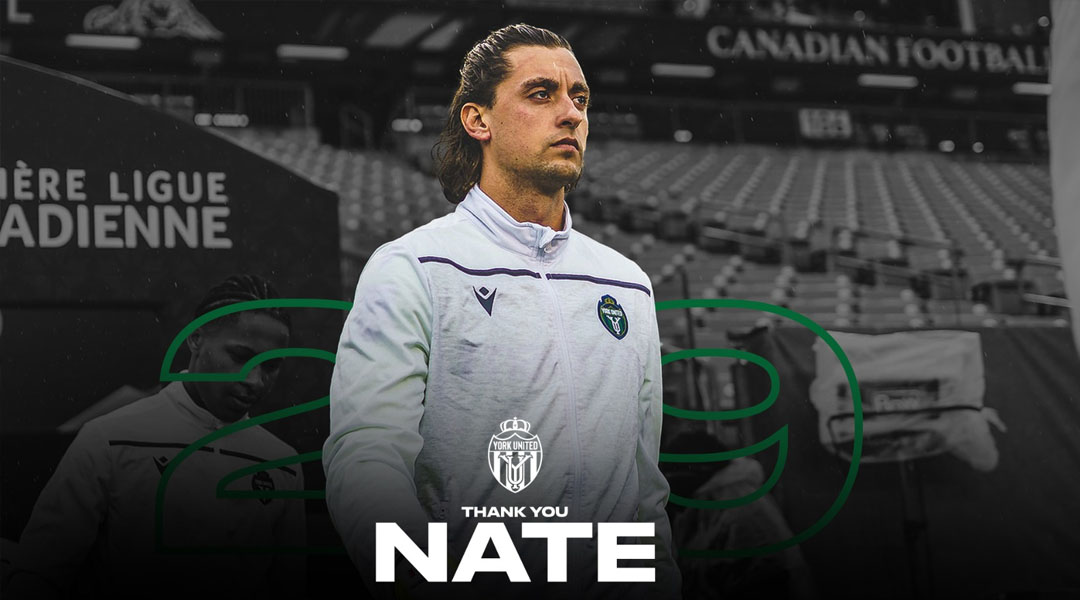 The 28-year-old has been the club’s number one goalkeeper throughout all of its CPL campaigns, recording 62 appearances across all competitions with 17 clean sheets.

The Keswick, Ontario-born goalkeeper set a strong tone right from the get-go, earning a Golden Glove nomination from the club’s inaugural CPL campaign before landing a comparably sizable two-year contract that, according to multiple former York United players, was always going to be a point of contention when it came time to renew after the 2021 CPL season.

Club President Angus McNab wanted to recognize Nathan’s contributions to the young side, which also include a big penalty save against Pacific this season that helped the side reach playoffs for the first time in club history.

Nate has been with the club since day one so it is only right that we recognize the contribution he has made.

Nate now departs as the second all-time appearance leader for the Nine Stripes after Diyaeddine Abzi, who has clocked in just one more appearance than the six-foot-two goalkeeper.

Ingham had first arrived as a last-gasp addition in 2019, taking the starting position from Matt Silva and featuring in all but two matches. The Island Games saw the Nine Stripes miss out on playoffs with the side bringing in Niko Giantsopoulos afterwards, though Ingham retained his starting position throughout his third season.

The 2021 campaign saw Ingham top the league in terms of over-performing his expected goals against, with the Nine Stripes goalkeeper leading the way with -3.56 and, thusly, making our CPL Awards Snub List. He also finished above expectations in the year prior after finishing with -1.24 goals conceded versus expected.

He made twenty-two appearances in his final season, with Niko Giantsopoulos filling in for him during a few small injury spells. The club’s best-yet campaign saw Nate make 74 saves and record two big penalty stops along the way.

Northern Tribune was told by more than one former York United athlete that Ingham had earned a sizable contract increase from Jim Brennan following the inaugural CPL campaign, and that it was always bound to become a point of contention when it came time to renew his deal. Whatever the Nine Stripes offered him, it evidently led to a breakdown in negotiations.

He had a great year but the reality of a salary cap means we need – both us as a club and Nate as a player – to look at opportunities that that are a better fit for each other.

It’s worth noting that while the league plans to increase the salary cap for the 2022 CPL Season, that doesn’t necessarily imply clubs will be obligated to fill it. After going through two pandemic-impacted seasons, it’ll be interesting to see which sides will take advantage of the additional cap space.

In an official release by the club, Nathan Ingham was able to say a farewell to the fans who cheered him on at York Lions Stadium:

Thank you for trusting me to be your starting goalkeeper these past three seasons. York will always have a special place in my heart and I wish everyone the best moving forward. It was an honour to be a part of my hometown team for their first three years of existence.

Since the Nine Stripes launched three years ago, the only remaining inaugural roster members are Diyaeddine Abzi and Roger Thompson. Six former members of the club’s 2019 roster played elsewhere in the league this year, with former York United Captain Manny Aparicio lifting the North Star Shield with Pacific FC.

While Ingham’s next steps remain to be seen, it’s easy to envision him making an intra-league move after putting in three big CPL campaigns. He had played for FC Edmonton in its NASL era, and the club is in need of a new number one following the early retirement of Connor James. Atletico Ottawa may be looking for a new shotstopper too, and would be closer to home for the Ontario-born athlete.

That doesn’t mean he’s not looking at other leagues, though:

“I’m keeping all my options open,” he told Northern Tribune, “there have been conversations with my agent about both [CPL and abroad]. And we’ll choose whatever is best.”

Whatever happens next, Ingham has certainly made an impression at the CPL level, and it’ll be interesting to see where he lands.