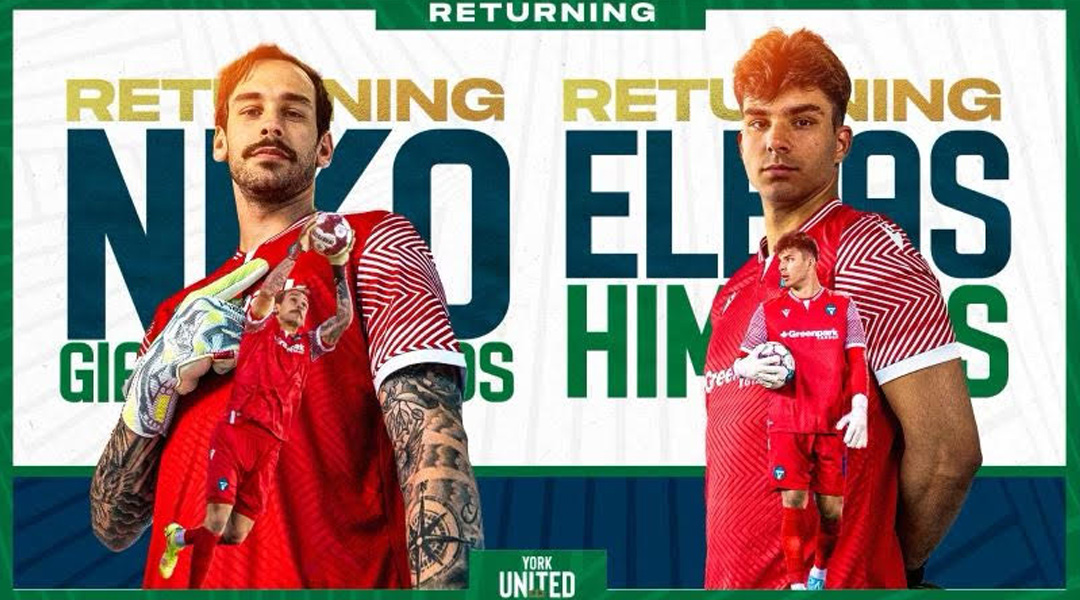 York United has re-signed both of its goalkeepers for the 2023 Canadian Premier League season.

The move sees Niko Giantsopoulos back for a third year at York Lions Stadium, where he took on the number one starting position this year following the departure of Nathan Ingham.

The 28-year-old Markham native featured between the sticks for twenty-one matches this season, procuring six clean sheets for York United in league play. Before his season was sent off-track through injuries, he also enjoyed a Canadian Championship spell that saw him prove a penalty shootout hero twice before being called upon as an emergency loan for the Vancouver Whitecaps in Canadian Championship action, though he was unused on that ocassion.

Evidently, the Nine Stripes have liked what they’ve seen from the 28-year-old through the thirty appearances he’s made since coming in from Cavalry FC in a bid for more playing time.

“Niko was having a great season and the injury he got in the Valour game was very unfortunate,” added Club President Angus McNab. “To that point, if you look at the advanced goalkeeper metrics, his performances were the best in the league, while his save vs expected save percentage was the best of any keeper in the Canadian Championship. Add to that his role in the shootout wins vs Ottawa and Pacific and you see how important he was for us in a memorable cup run.”

The club has also re-signed 20-year-old goalkeeper Eleias Himaras, who had arrived as a midseason reinforcement from League1 Ontario’s Electric City FC. He stepped up to the plate when Giantsopoulos was injured, making ten Canadian Premier League appearances and standing tall at the professional level after. In all, he made 28 saves and retained his first professional clean sheet against Halifax.

His new deal will run through 2023 with a club option for a further year, too.

“Goalkeepers tend to mature a lot later but his ability to throw himself into the game has been exciting and he’s already accumulated a decent amount of experience. He knows he’s got to just turn up and get better every day now – that’s what we expect of him and, perhaps most importantly, what he expects of himself,” added McNab of the youngster.

The fight for the club’s number two was an interesting one this year: the club originally brought in Matthew Nogueira following his stint in Portugal, but after he no-showed a match which nearly saw a 15-year-old replacement come on, his contract was nixed and Himaras was brought in at the expense of Gianluca Catalano, who had featured on the bench aplenty and had even made his debut against FC Edmonton.

York United has now sorted out its goalkeepers early, though questions remain of the backline in front of them: with Dominick Zator set to sign with Polish side Korona Kielce on a free transfer and Chrisnovic N’sa out of contract too, there may be several big shoes to fill.