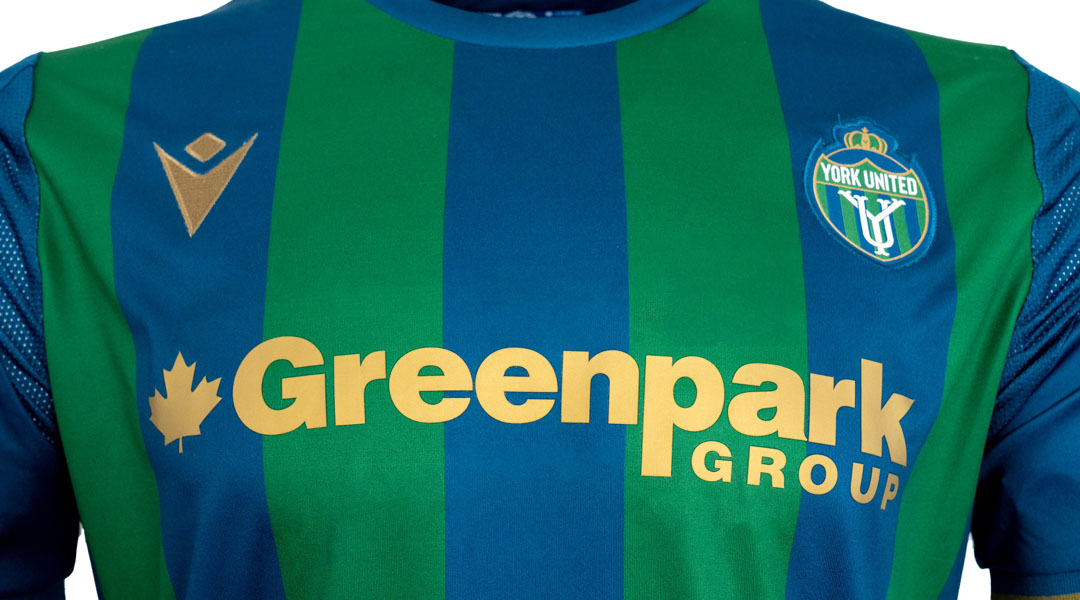 Canadian Premier League side York United has named Greenpark Group as the club’s principal partner ahead of the upcoming season.

Fans watching York United embark on its preseason trip to Victoria will already have seen the company’s branding on social media posts, with Greenpark Group serving as the presenting sponsor for the trip out west.

“Ever since Greenpark first started in the late 1960s, community has always been the centre of what we do,” said company founder Carlo Baldassarra, “this football club is an extension of that commitment to our community, and we’re immensely proud to continue and further our investment as principal partners.”

The company will also sponsor the new Greenpark Suites at York Lions Stadium, with the new partnership also seeing Greenpark Group replace Macron is the club’s leading sponsor for its 2022 kits.

The club’s existing kit and a new goalkeeper option can be seen with the new sponsor below:

The company was exceptionally supportive of the club’s early rebrand, with York United doing away with the moniker of York9 FC in favour of more traditional branding that allows the club to embrace it’s connection with Toronto in addition to the York Region.

With York United taking ambitious strides for sustained success, the Nine Stripes will be aiming for a second consecutive playoff spot this season under the helm of Martin Nash. The CPL side has retained the bulk of its roster, with several internationals and a few new domestic arrivals now set to help the club reach its full potential.

The Nine Stripes are also taking a look at both Austin Ricci and Osaze De Rosario, who are fighting for a roster spot on a side which hopes to capture larger community support at York Lions Stadium this season.

For Club President Angus McNab, the support of both Greenpark Group and the family behind it has been integral to running a front office which has routinely impressed, even if results on the pitch have been mixed.

“It’s been very special for me to spend so much time with the Baldassarra family and witness the genuine passion, commitment, and support they have for what we’re doing,” said Club President Angus McNab, “the vision and mission established when we re-launched as York United FC shares the values embedded in both the Baldassarra family and Greenpark Group. This new alignment and sponsorship is a great endorsement of that and it’s a truly exciting development for the organization.”

Last season saw Atletico Ottawa navigate away from in-house sponsor OneSoccer through a partnership with ComeOn!, though the streaming service still sponsors Valour FC. It had also sponsored FC Edmonton before Swoop took over as the club’s primary kit sponsor.

York United will be presenting a its new primary and alternate kits at its upcoming 2022 Kick-Off event set for Wednesday, March 30, which is the first public pre-season event the CPL side has been able to hold in just over two years. Greenpark Group will be the presenting sponsor, with staff and players set to get facetime with fans at the Springhill Suites in Vaughan.

The blue-and-gold Nine Stripes jersey will be returning in 2022 as pictured above, too.