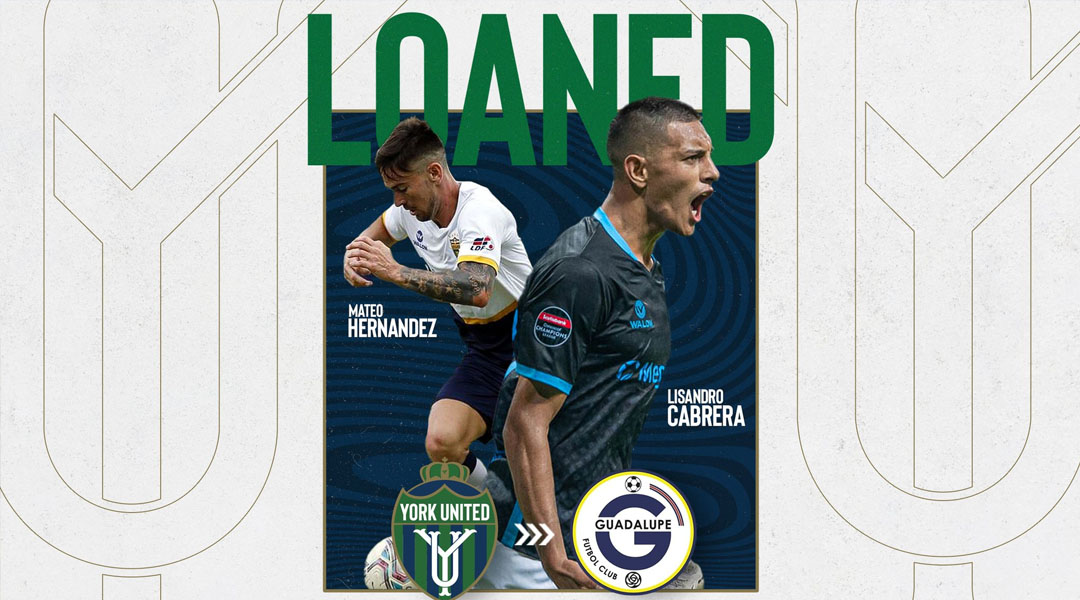 For the first time in Canadian Premier League history, a CPL side will see two players go through two separate loans before stepping foot in Canada.

Today, York United announced that Argentine duo Lisandro Cabrera and and Mateo Hernandez will be loaned to Costa Rican side Guadalupe FC until the end of the year, with both athletes finishing up their open-ended Atletico Pantoja loans early due to COVID-19 difficulties in the Dominican Republic.

Striker Lisandro Cabrera had made CPL history while on loan with the Atletico Pantoja, becoming the first Canadian Premier League athlete to score in the Concacaf Champions League during the club’s second leg against CF Monterrey.

Mateo Hernandez then joined him on loan at Atletico Pantoja in mid-May, but now their parent club has opted to move the duo to Costa Rica after a COVID-19-related relay saw Atletico Pantoja’s most recent league fixture scrapped.

Guadalupe FC was already in discussions to take in the pair on loan, with the cancellation of the league fixture then “fast-tracking” the move:

It is unfortunate the way a few things have developed timing-wise, but when Atletico Pantoja’s game was cancelled at the weekend, we all spoke and the decision was made to send the guys to Costa Rica a bit earlier than planned. Guadalupe are a fantastic club and this is a great opportunity to secure a high level of competition for Lisandro and Mateo while we wait on further developments with their work visas.

If the name of the Argentinian duo’s new loan destination sounds familiar, that’s because it’s where Valour FC signing Keven Aleman spent time on loan before heading to Winnipeg to prepare for the 2021 CPL season.

While Atletico Pantoja wasn’t able to host the two York United athletes for as long as expected, York United Club President Angus McNab was sure to thank the Dominican side for hosting the athletes while they await visa approval to enter Canada.

I thank Pantoja for their partnership and it was fantastic that Lisandro could play in big CONCACAF Champions League games and score the club’s first-ever goal in that competition. Mateo also made an impact in a short period of time and it’s been good to get him back on the field again too.

The duo remain the only two Nine Stripes athletes still out on loan, with domestic athletes Michael Petrasso and Dominick Zator en route to the club following their respective loans in England and Sweden.

The club’s attack will also be reinforced by the much-belated arrival of Jamaican forward Nicholas Hamilton, who signed with the club in 2019 but was unable to join the side for last year’s Island Games campaign due to travel difficulties. Following the conclusion of his loan with Dundee FC, he’s currently in the United Kingdom awaiting the last steps of his travel paperwork.

With the 2021 Canadian Premier League season set to begin in about a month’s time, it’s looking less likely that Lisandro Cabrera and Mateo Hernandez – who both signed on multi-year deals – will be able to participate in the opening stages of the season.

To that end, McNab has suggested that the club may be making new roster moves in the near future. With the duo’s loan update having been announced in short order, York United fans should expect some new York United player announcements in the very near future.

This club has had difficulties securing the arrival of players in every year of its existence, with last year seeing the likes of Adrian Ugarriza, Brian Lopez, and Jaco all released after they were unable to enter the country, with the inaugural campaign seeing the same story unfold with Jose Pina even before the COVID-19 pandemic came into play.

York United has retained the ability to recall Mateo Hernandez and Lisandro Cabrera, though the club will be subject to the Canadian transfer window which will shut on August 5, 2021.