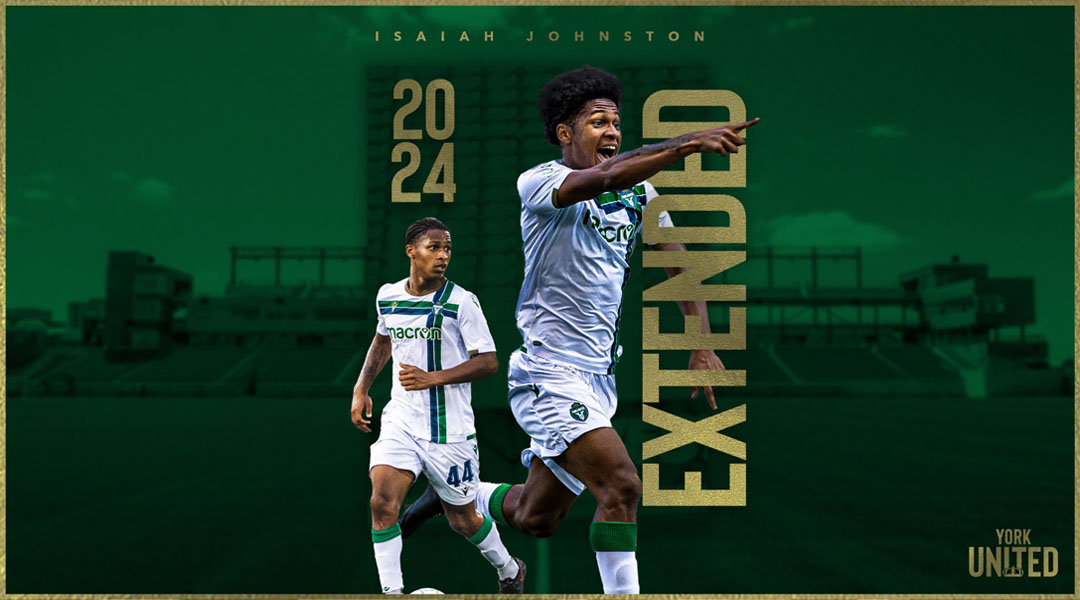 Canadian Premier League side York United has reached an agreement with midfielder Isaiah Johnston that will see the 19-year-old remain at York Lions Stadium through to 2024.

The energetic midfielder has established himself as a starting presence in the Nine Stripes lineup, highlighting a breakout campaign that has seen him feature in all but three of the club’s league matches this season.

Given that he only managed seventeen minutes from last year’s shortened Island Games season – and that’s after having trialed with the club in 2019 without a contract offer – this represents a significant step up for the vocal midfielder. With Johnston now proving to be a consistent and hungry performer at the CPL level, it’s no surprise that York United wants to keep a firm hold of him.

Johnston’s second season as a Nine Stripe has seen him start 23 of his 25 appearances across all competitions, with the youngster scoring against FC Edmonton, the Halifax Wanderers, and Cavalry FC, while also bagging an assist against Master’s FA in the Canadian Championship.

I’m delighted that Isaiah has put his faith in the club and trusted us to continue to his development as a player. It’s not just his on-field performances that have caught my attention. He’s developing into a real leader in our locker room and his parents should be immensely proud as they’ve raised a very impressive young man.

McNab has moved quickly to secure extensions for two of the club’s promising youngsters, with the Nine Stripes Club President having also extended the contract of Max Ferrari through to 2024, too.

18-year-old striker Lowell Wright, who turned heads with his explosive performance against Pacific last weekend, had already inked a deal that includes options to 2024.

One of the best parts about my job is getting to offer young players their first contract. But it’s arguably more satisfying to pick up the phone and offer an extension to someone who has performed because there’s an awareness of us wanting to reward them and an understanding that they’ll have a big role to play in our future.

McNab suggested that both Isaiah Johnston and Max Ferrari ought to be shortlisted for the league’s Best Canadian U-21 Player of the Year award. The club saw Diyaeddine Abzi receive such a nomination in 2019, though league MVP Tristan Borges ultimately took home the prize.

Prior to signing his initial multi-year deal with the Nine Stripes, Johnston played his first year of varsity ball with Cape Breton University. His first steps at the semi-professional level came with League1 Ontario side Woodbridge Strikers, where he scored one goal in five appearances back in 2017.

With Isaiah Johnston now extending his contract through to 2024, the 19-year-old looks poised to be a crucial part of a Nine Stripes midfield that presently finds itself in the pole position of a precarious playoff race: with two matches left in the regular season, Johnston is 180 minutes away from locking in his first-ever postseason campaign.

The financial details of Johnston’s contract were not disclosed by the club.