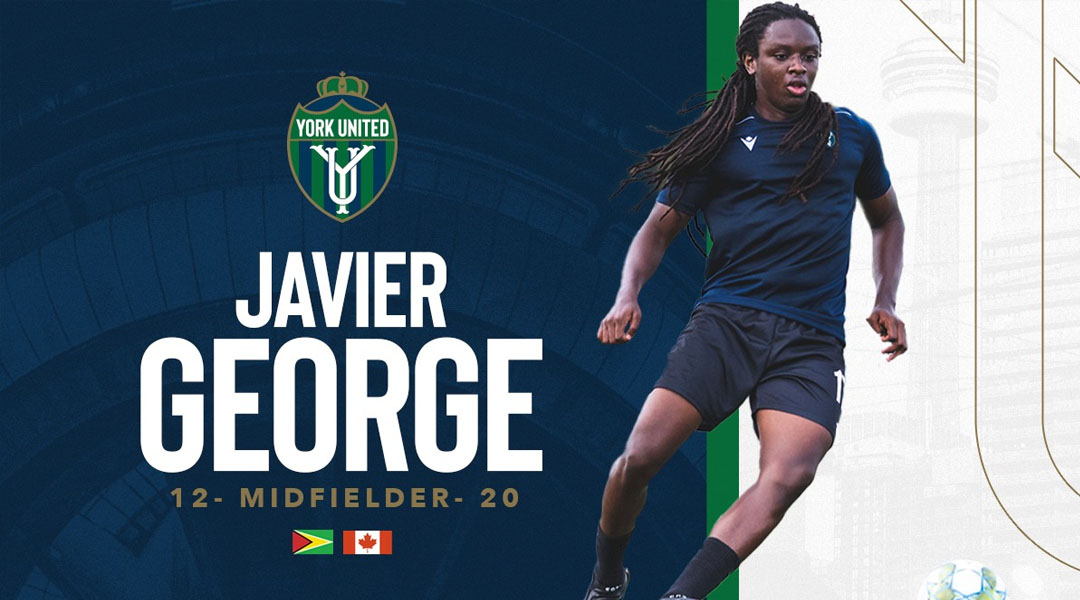 Canadian Premier League side York United has added Guyanese-Canadian midfielder Javier George for the remainder of the season, with a club option for 2022.

The 20-year-old has previously spent time with League1 Ontario side Toronto Skillz FC, having risen through the youth ranks there since joining at the age of 8. He had also spent shorter stints with both the TFC Academy and French fifth division side Stade Beaucairois.

George has also made two senior appearances for Guyana, his first taking place this April in a 2021 Gold Cup qualifier against Guatemala and his second coming in a World Cup Qualifier against Puerto Rico in August.

He had previously appeared for Guyana at the U-20 level for the 2020 Concacaf U-20 Championship.

The five-foot-ten midfielder is a native of New Amsterdam, Guyana but moved to Canada at the age of six. York United Club President Angus McNab describes him as a youngster who has been training with the side since returning from the Gold Cup.

Former Nine Stripes Emilio Estevez was training with the side in a similar manner ahead of Taiwan’s World Cup qualifiers, though it’s only George who now arrives as a rostered member of the Nine Stripes for the remainder of the season.

It’s a good fit for us all with the last 50 or so days of the season approaching and ensures we have 23 players that are fully fit and challenging each other on a daily basis as we push on and try to achieve playoff qualification.

Given that George was spotted training in some Guelph United gear, it looks like he’d also been training with the top-of-the-table League1 Ontario western division side prior to inking a deal with the Nine Stripes.

York United head coach Jim Brennan describes George as a player who reads the game well and shows some good aggression on the pitch, which could make him direct competition with Isaiah Johnston – a youngster who has really come into his own this season.

Last month saw York United sign youngsters Muslim Umar and Andrew Romano to developmental deals, though their roles are largely as training players. The former had ridden the bench with FC Edmonton earlier this season.

The Nine Stripes are riding a wave of seven matches unbeaten in league play with the side currently resting fourth in league standings. The team has a game in hand over fifth-place Halifax Wanderers, and will be looking to secure its hold on a playoff position with a win over Atletico Ottawa this Friday.

Javier will not be immediately available for selection, having picked up a knock during a recent training session with his new teammates.

York United did not disclose the financial details of George’s contract.