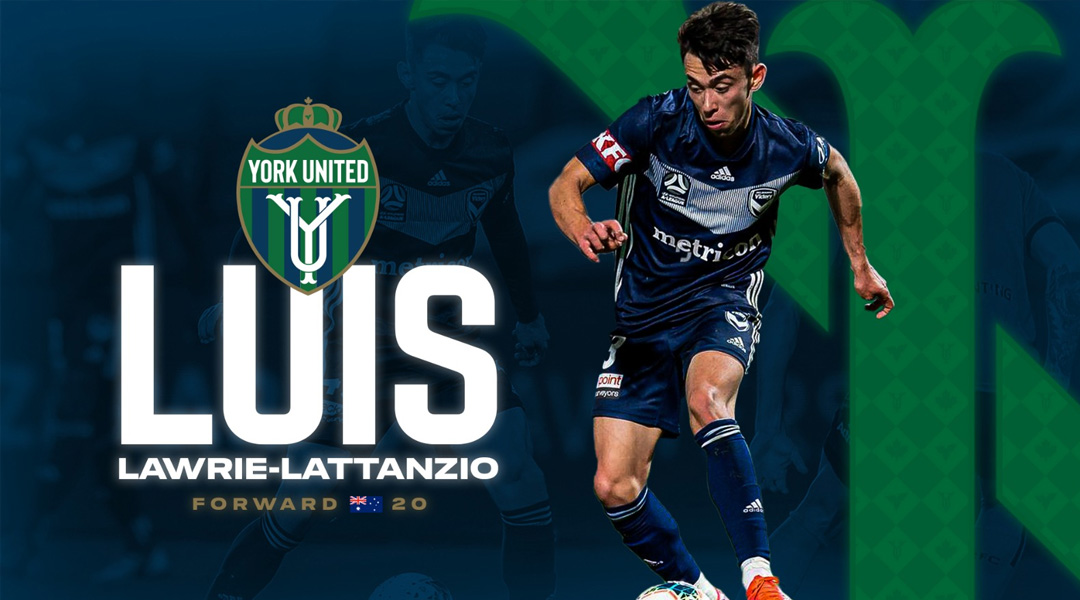 York United are bringing in Australian forward Luis Lawrie-Lattanzio to aid the club’s search for goals.

The 20-year-old becomes the third summertime arrival after Ronan Kratt and Australian defender Tassss Mourdoukoutas. The newest Nine Stripes addition can play both as a winger and a central attacker, both areas in which York United needs bodies.

Like his compatriot, he arrives after developing in the Australian A-League, where the former Adelaide United youngster plied his trade for the Melbourne Victory. Lawrie-Lattanzio made 24 appearances across all competitions during his time with the club, which included five AFC Champions League appearances.

“For a young man, Luis had already had some great experiences,” says Club President Angus McNab. “He’s played for his country at the U-17 World Cup in Brazil and has made appearances in both the A-League and Asian Champions League for Melbourne. He’s a player we feel offers something a little different from our current forward and wing options. Luis is genuinely two-footed and I think he can have a real impact on the CPL.”

Having left Melbourne following the completion of his contract this May, he dipped his toes in the Australian second tier with Campbelltown City before opting to try a stint abroad with York United.

He becomes just the second Australian to play in the Canadian Premier League, and the first Indigenous Australian.

The 20-year-old’s young career saw him prove prolific at the youth level, earning a Golden Boot in Australia’s youth league back in 2019. After earning a spot in the first team with the Melbourne Victory, he made his professional debut at the age of 18, tallying an assist in AFC Champions League action in a 3-1 loss against Beijing Guoan FC.

His first professional goal would come against the Brisbane Roar in 2021, though he ultimately found his appearances quite limited throughout the last two years in Victoria’s state capital. In a bid for game time, he’s now locked in a Canadian chapter.

“I feel so privileged & thrilled to be able to sign with this amazing club,” said the new signing. “I’m looking forward to representing The Nine Stripes and getting to meet our amazing supporters that I’ve heard so much about.”

The new winger has also represented Australia at the U-17 level, having featured in a friendly against England and having faced Ecuador at the U-17 FIFA World Cup in 2019.

York United is still closing in on an eventual successor to Diyaeddine Abzi, so the club’s summertime transfer activity hasn’t wrapped with the addition of Lawrie-Lattanzio.

York United currently sits seventh in league standings, and only by doubling their goals scored would they jump up from being the least proficient side in front of the net. With reinforcements now arriving, the club is hoping to turn the page on a difficult season and push itself back into a playoff spot.

Luis Lawrie-Lattanzio will arrive in Toronto tonight, which makes him an unlikely – but possible – addition to this Friday’s 905 Derby.