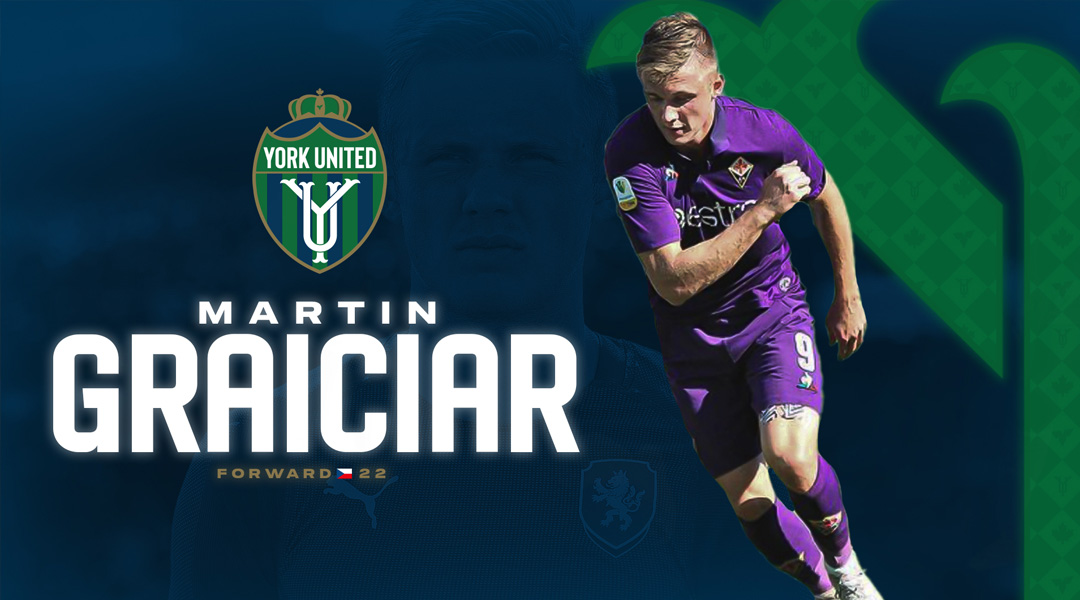 We reported last year that Martin Graiciar was on his way to York United, and the Nine Stripes have now made it official.

The 22-year-old Czech Republic youth international arrives on a multi-year deal after departing Serie A side Fiorentina, though most of his playing career has been spent out on loan. The highly-rated forward seeks a career restart at the club level after a promising start to his career has somewhat stalled overseas.

He now joins York United on a two-year deal with a club option for 2024.

He possesses one of the most interesting backgrounds that we’ve ever seen in the Canadian Premier League so far. The experience he can share from such high-profile clubs like Sparta Prague, Arsenal, and Fiorentina at just 22 is just fantastic, especially for our local lads like Isaiah [Johnston], Lowell [Wright] and Max [Ferrari]. He’s a very talented forward and we believe he can make a real impact with us

Graiciar began his career as a highly-touted youth prospect who trained with the likes of Sparta Prague and Arsenal before turning professional with Slovan Liberec in 2017, making nineteen appearances and scoring four goals. Italian Serie A side Fiorentina acquired him in that winter, whilst he was making waves with the Czech Republic U-19 squad.

He found himself loaned back to Liberec for the 2018 season, though he ultimately only played with their U-19 squad. The following season saw him loaned to Sparta Prague, where he’d trained as a young boy. He made nine appearances to cover for an injury spell before the following season saw Fiorentina loaned him back into the Czech top flight with FK Mlada Boleslav.

With his Fiorentina career stalling, the Italian club opted to terminate his contract in the fall with York United now swooping in lay claim on the youngster. The move was touted by his agent last month, who viewed it as an opportunity for the 22-year-old to restart his career at a good level.

Whispers of his arrival first began in late November when a York United fan noticed that the Czech forward was following both York United and its Club President, Angus McNab. “My wife will probably kill me for going on the record with this,” jokes McNab, “but I actually signed the contract for Martin in the labor and delivery ward of Lenox Hill Hospital, waiting to be invited into the operating theatre before my son was born!”

I am really happy to be part of this club. It’s an exciting time for the team, especially considering how last season ended with a playoff place. I’m just really looking forward to getting to Toronto now and for the season to begin, to be honest. And to all of our fans – who I’ve heard so much about – I can’t wait to meet you.

Graiciar becomes the seventh and final international signing allowed by the club under league rules, with York United bringing in Daniel Obbekjaer and Eduardo Jesus earlier this week. With 21 roster slots now filled and the club still in need of goalkeeper competition for Niko Giantsopoulos, York United’s roster is largely set for the 2022 Canadian Premier League season.

The financial terms of Graiciar’s contract was not disclosed by York United.