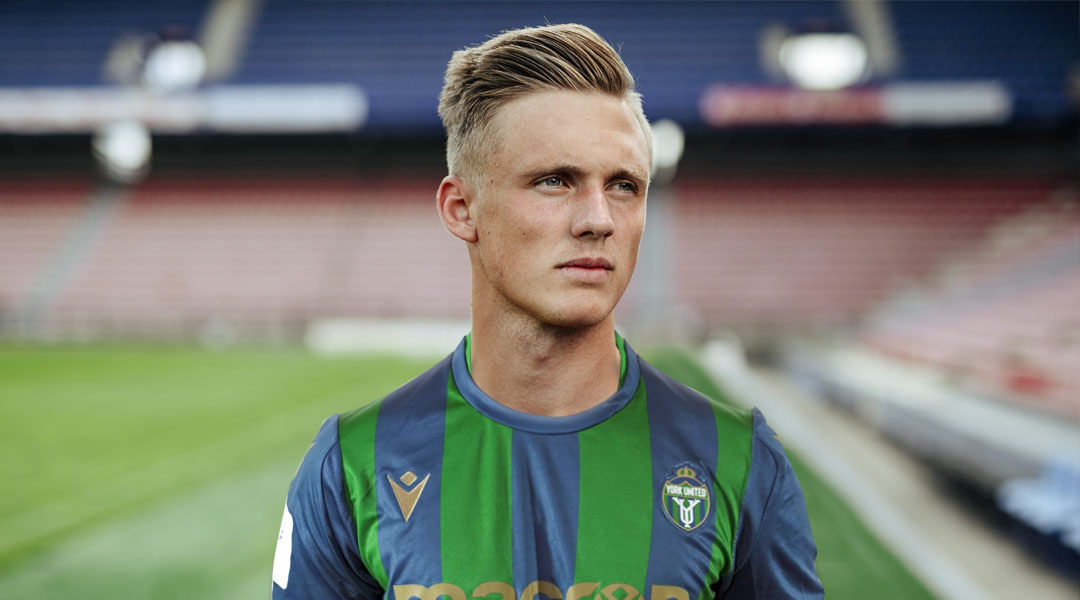 Newly-signed York United international Martin Graiciar has opened up about his path to Canadian soccer, and even revealed a little bit about the Nine Stripes’ preseason plans, too.

The former Czech Republic U-21 international was officially revealed by York United earlier this month, though this came several weeks after his signing was largely expected. The former Fiorentina man had spent the last several seasons out on loan, seeking a career restart after a hot beginning to his career had been on the verge of fizzling out.

In an interview with Sport.cz, the 22-year-old revealed that he had a few offers from both Poland and the German second division, but was swayed by the vision of playing in North America after York United made contact through Instagram. He wanted a change, and felt the move could help him get serious gametime in a league on an upwards trend in terms of development.

The offer from York United came in at the right time for the youngster, who revealed that he was considering whether the professional game was still worth it after multiple seasons of limited gametime out on loan.

“I was really sick of it,” he admits, “I was considering giving up on football and whether it would be better to go to America, study, and play football at university. But then this opportunity came up, and everything fell into place perfectly.”

The former Fiorintina man had mutually terminated his contract with the Serie A side in October after undergoing loan spells Liberec, Sparta Prague, and Mlada Boleslav that all resulted without many minutes – and a dry spell stretching back to his time with Liberec in 2018. He sensed that his career had started to shift downwards after the string of loans.

“I got tired of going back, telling myself everything was going to be okay. It hadn’t been fulfilling for a while – not so much football itself, but everything around it. It’s built up inside me over the years.

It was a far cry from when Fiorentina first acquired the forward while he was making waves with the Czech Republic U-19 squad.

“When York came calling, new blood rushed into my veins. I gained a new motivation and passion that I thought I no longer had in me in recent months.”

Ready to head onto a new chapter – he thinks the term career reboot is cliche – Graiciar is unsure if he’ll even return to European football if the venture in North America doesn’t pan out. It’s not impossible, he says, though he realizes that he’ll be 25 at the end of his current contract, and he’s unsure about reliving his past frustrations well into his mid-twenties.

That’s also why Canada might be a good choice. Because if I went to, say, the second German league, it would be another risk and it could be the same course and it would be a vicious circle. The Canadian league may have the level I need now. To score some goals, start playing regularly, get my confidence back and get back to where I was before. I’ll probably be one of the leaders on the team because there are a lot of young players in the league. I have nothing to lose and if I have to make a cut, this could be it.

Looking back, the forward admits that departing Liberec for Fiorentina at the young age he did was a mistake, but says that nobody in his position would have declined the offer from the Serie A side.

“It’s an experience, albeit a bad one,” he reflects, “at least I can be an inspiration for other young players in the Czech Republic. My example can help them to decide. A lot of them go abroad and many of them don’t do well there, which is my case, but I’m not saying I regret it. I was at Arsenal when I was 14 and I’ve wanted to go abroad ever since. The offer from Fiorentina was hard to refuse, everyone liked it. In hindsight, it was probably a mistake, but who knew?”

Having already arrived in Canada, Martin is keen to flush those memories down with a new challenge in Canada. It’s a much-needed fresh start that came at just the right time.

Graiciar states the 2022 Canadian Premier League season is slated to start around April 9th, though official channels have remained quiet on a specific kickoff date.

The Nine Stripes are expected to begin season preparations shortly, undergoing ten days of training before playing a match against as-yet-unknown competition before a brief rest period. While it had earlier been revealed that Atletico Madrid offered to host all eight CPL sides for a preseason in Spain – something which has been on offer since Atletico Ottawa launched two years ago – the COVID-19 pandemic has prevented such a trip from occurring on a league-wide scale.

Instead, said Graiciar, the club is deciding whether to travel to Florida or South Carolina for the remainder of preseason. Prior to the COVID-19 pandemic, the club had ventured to Florida before preseason camp was interrupted by an emergency return home.

For now, the forward will be remaining in Vaughan, where the club rents spacefor athletes who would otherwise be situated outside of the Toronto area. The Nine Stripes will have all seven of its internationals present for the 2022 CPL season, which will mark the first time since the pandemic began that its full international contingent will be present.

Graiciar is a player with a high ceiling, but he’ll need the minutes to get his confidence back to reach them. He’ll be an interesting one to watch for York United.