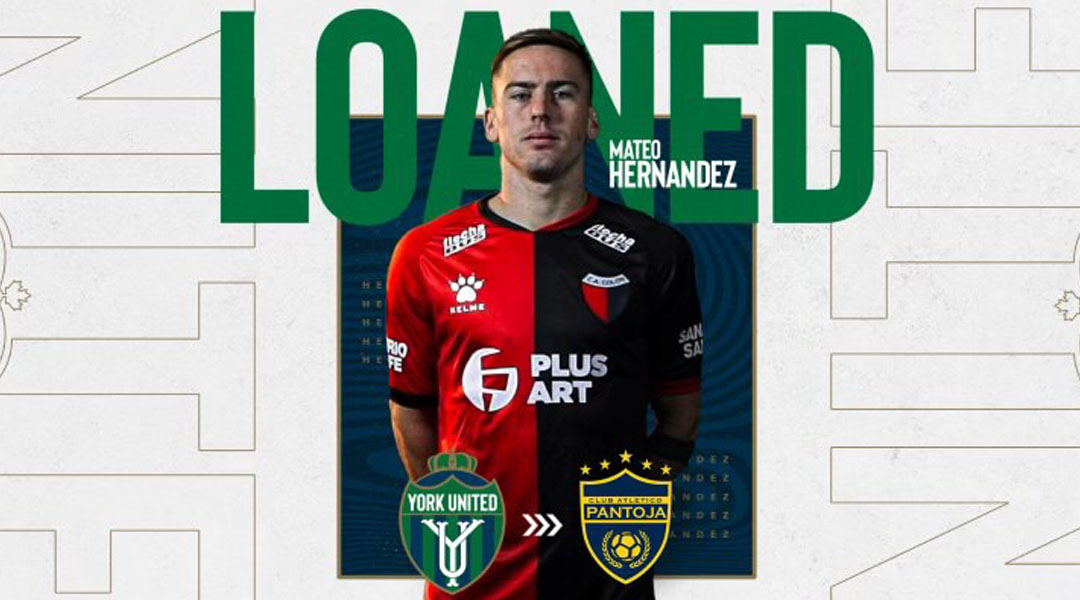 Canadian Premier League side York United has announced that attacking midfielder Mateo Hernandez has been sent on loan to Atletico Pantoja until the December, though the Nine Stripes have retained the right to recall the 22-year-old Argentinian athlete at any time.

The loan move is essentially identical to the one structured for Lisandro Cabrera, who was loaned to the same club this March. While the duo await visa clearance to enter Canada, the two Nine Stripes athletes will now be playing together in the Dominican Republic top flight.

With York United still in a holding pattern regarding both the visas of both players, the ability to train, and concrete plans for the 2021 Canadian Premier League season, it’s a move that makes sense for both player and club.

We are a club centred entirely around our players and when making loan decisions we focus only on the best situation for their individual development. The long-term benefits to us are too important. This loan gives Mateo the opportunity to play football at a time when we face uncertainty regarding a return to training, as well as with his own visa process. He has a chance to test himself again ahead of joining up with us.

Today’s announcement brings the tally of on-loan York United players to 5, making the CPL side a league leader in terms of players sent out on loan while the club awaits news of the third Canadian Premier League season.

Domestic talents Michael Petrasso and Dominick Zator are currently out on loan to Barnet and Vasalunds IF respectively, and they’re currently slated to return in June alongside Jamaican forward Nicholas Hamilton, who is currently with Dundee FC.

The only other longer-term loan move beyond Hernandez is the aforementioned Lisando Cabreba, who was loaned to Atletico Pantoja two months ago. Like Hernandez, this move is set to run until the end of the season with a recall option at the ready. The striker’s time with Atletico Pantoja saw him make subtle history as the first CPL athlete to score in the Concacaf Champions League, though the Dominican side ultimately bowed out in a 6-1 aggregate loss to Liga MX giant Monterrey.

Last year saw the club nix multiple contracts due to visa difficulties caused by the COVID-19 pandemic, with promising internationals like Adrian Ugarriza and Jaco never stepping foot in Canada before departing from the club. With York United now loaning Hernandez while retaining the ability to recall him at anytime, it’s clear that the Nine Stripes remain hopeful that the Argentine will obtain his visa in time for CPL action.

With Hernandez and Cabrera already familiar with one another, Club President Angus McNab is hoping the loan move will result in even more chemistry between the duo when they’re able to join York United.

[Atletico Pantoja has] taken excellent care of Lisandro and when they came to speak to us about Mateo it was an easy decision given our experience working with them. Having Lisandro and Mateo play together was hugely attractive for me. They actually know each other from back home in Argentina and are excited to be reunited ahead of coming to Canada.

The Sante Fe-born attacking midfielder began his career with Argentinian top flight side Club Atletico Colon, for whom he made seven appearances. Five of them came in league action, though he also featured in the Copa Argentina and Cupa Sudamericana, too.

His contract with York United has options for 2022 and 2023, which means he could remain with the club if the worst case scenario of missing the 2021 Canadian Premier League season unfolds.

The CPL side has a full roster on paper, with Jim Brennan and Angus McNab having overseen a significant roster rebuild – and club rebrand – over the prolonged offseason. With big intra-league acquisitions like Dominick Zator, Chrisnovic N’sa, Noah Verhoeven, and Niko Giantsopoulos supplementing a mix of new domestic and international talents, expectations for the Nine Stripes will be high in the upcoming season.

The club will have roster room to add its two CPL-U SPORTS Draft Picks while at least two athletes are out on loan.

Atletico Pantoja’s loan of Mateo Hernandez is set to run until the end of the season, with York United retaining the right to recall him at any time.