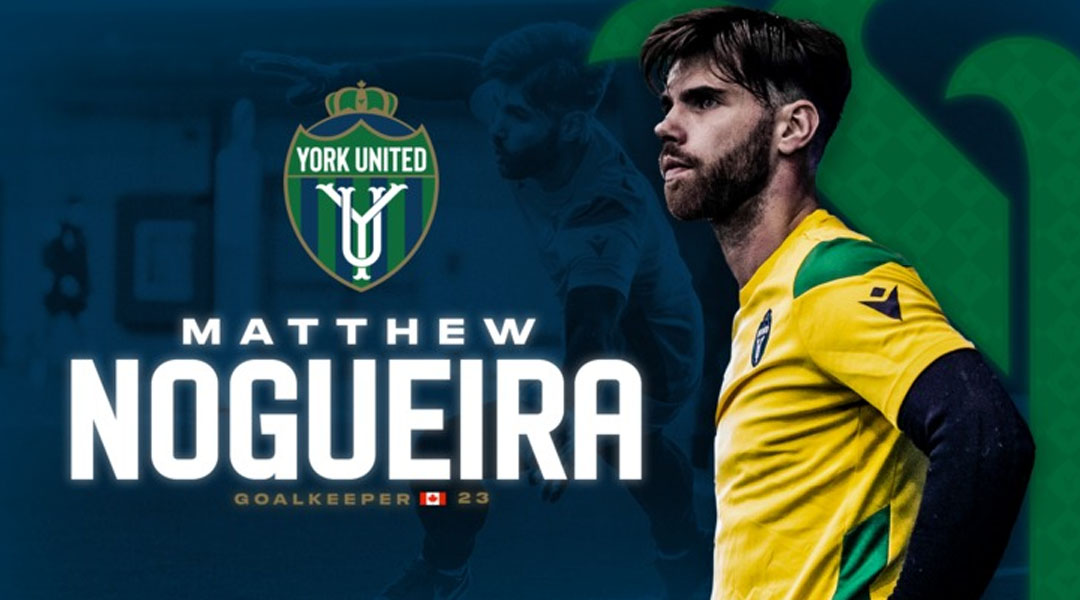 We’d reported that the 23-year-old goalkeeper had been nearing a deal with the Nine Stripes following his trial with MLS side CF Montreal one month ago. Now slated for his first season in the Canadian Premier League, the Canada U-23 international will contest for game time against Niko Giantsopoulos.

The six-foot-three goalkeeper entered a lot of radars in North America after accepting a Canada U-23 call up alongside Lucas Dias in 2021, with Nogueira now hopeful that high-level gametime in the CPL will help launch him towards a senior team nod.

Born in Canada, Nogueira’s youth career saw him develop for Benfica, Toronto FC, and Gil Vicente after catching the eye of Nuno Santos, who now works alongside Jose Mourinho as a goalkeeper coach at Roma. He’d also trained with York United goalkeeper coach Camilo Benzi, too.

Matthew’s first senior minutes came in the Portuguese lower divisions with Fornos de Algodres and RRD Agueda before he signed with CS Maritimo in 2018. He got good minutes with the top flight team’s U-23 and B squads after signing, and even made his senior debut for CS Maritimo in a cup match. An injury in his second season curtailed this momentum, with Nogueira’s time in Madeira ultimately concluding at the end of his three-year deal.

After an ill-ventured trek to Serbia with FK Zlatibor – who suffered a transfer ban before he could sign with the side – the goalkeeper returnedto Toronto. He’d been eying the Canadian Premier League for the last year or so, and wanted to continue his career closer to home.

He’ll now have his opportunity with a CPL side looking to secure sustained success under new head coach Martin Nash.

I chose York United because I know the team has ambitions. It’s a team that’s growing and I believe I can improve my game here. So, I’m really excited to start the season. I have big ambitions and I think I’m on the right track, especially being here at York. And maybe that can give me a stepping stone back to the national team.

With the signing of Nogeuira, York United has continued its strategy of signing two ‘number one’ goalkeepers – though it remains to be seen who will carve out the most gametime this season. With Nathan Ingham having left for Atletico Ottawa, it’s a golden opportunity for both keepers.

“The competition here with Niko will make us both grow,” said Nogeuira, “obviously we’re gonna fight for a spot, but with respect. This team should have big ambitions because of the players we have. It’s a great group and I believe we’ll do some special things this season.”

“Everyone knows that we’ve had a number of young, talented keepers training with us during our pre-season,” said Club President Angus McNab, “but Matthew was the clear choice to come into the group and push Niko every day.”

The club recently had former Toronto FC II goalkeeper Gianluca Catalano training with the team, though McNab notes that some of the youngsters it looked at will need some additional League1 Ontario experience before they’re ready for professional heights.

For Matthew Nogeuira, he’s finally landed a contract that keeps him close to his young daughter. He’ll have a golden opportunity to impress at the CPL level and, if all goes according to plan, it could help catapult him to further heights, too.

York United is currently in Victoria for a preseason camp that will see the side play against Pacific FC, Valour FC, and the Vancouver Whitecaps U-23 team.