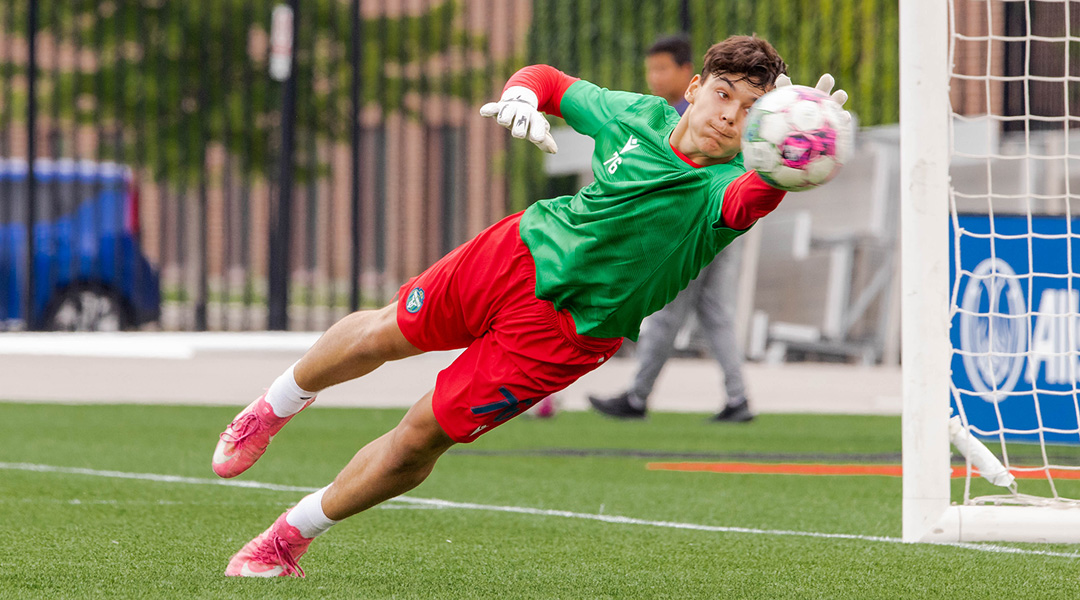 In the midst of a whirlwind fixture rush with a heap of injuries on top it, York United came inches away from fielding a 15-year-old goalkeeper in this weekend’s home loss to Valour FC.

The club entered the match having already lost out on three athletes to season-ending injuries, with another four out with knocks, three unavailable, and one away for international duty. The Nine Stripes bench bore clear evidence of the selection woes: of the seven players on the bench, just one was a fully contracted athlete. The rest were development athletes and emergency fill-ins.

Perhaps the most interesting addition was Michael Williams, a 15-year-old goalkeeper from Bryst Football Academy who arrived to the stadium that day not knowing he would be called to the bench. The Nine Stripes squad sheet had initially listed Matthew Nogueira as the second choice goalkeeper, but with the player absent – no club comment on why, as of yet – the team needed someone to fill the spot.

So, the 2006-born youngster suited up in Nogueira’s kit, strapped on gloves that weren’t his, and joined a bench that included no less than five other emergency fill-ins. With Niko Giantsopoulos taking a serious knock in the first half, the teenager found himself warming up on the sidelines on the precipice of an entirely unexpected debut, though Giantsopoulos was ultimately able to see out the match.

While the youthful fill-in shotstopper wasn’t substituted in, the match did see Cyrus Rollocks make his return from the bench after being one of the player’s cut following the club’s inaugural campaign. The striker has been in fine form for League1 Ontario side Scrosoppi FC this season, and found himself as one of many League1 Ontario athletes called upon by a Nine Stripes side in need of bodies.

“I know Cyrus from watching him play in the first year,” said York United head coach Martin Nash after the match. “He’s got some pace and size, and we’re looking to get in behind him late and thought we’d give him a chance to see what he could do. He did fine, he had a couple opportunities to take guys on and did some good things, so it’s a good opportunity for him.”

Of the ten developmental and emergency depth signings the club has made this season, Rollocks became the first to make an appearance. With the club’s healthy athletes clocking in a hefty number of minutes, however, Nash notes that some of these depth options might get a chance to test themselves at the professional level, though he has reservations about throwing them in.

“Yeah, it’s possible. We haven’t really trained since they’ve been in because we’re playing playing every three days. It’s been tough because there’s not been a lot of training sessions, so it’s tough to really gauge what you’re going to get out of them in a game, and if they really understand tactically where we’re at and what we’re doing. Sometimes you don’t want to stick them in a bad spot. […] it’d be nice to be able to play some, but I’m not sure if and when it’s going to happen. They’re doing well in training, to be fair to them.”

York United’s limited squad selection will be somewhat alleviated by the arrivals of Ronan Kratt and Tass Mourdoukoutas after the Canada Day away game to FC Edmonton, while team captain Roger Thompson is expected back to training next week and Lowell Wright is now returning from Canada U-20 action.

Unfortunately, it looks like Michael Petrasso, Oliver Minatel, and Sebastian Gutierrez will be out for a further chunk of time, with Austin Ricci, Martin Graiciar, and William Wallace out with season-ending injuries.

With July set to see the club undergo five league matches that might just shape whether a playoff position seems attainable, York United may need to lean on some local talent as the seventh-placed sides seeks a rise up the table.

For Michael Williams, he’ll go back to training duties for now – though he’s clearly keen for a matchday roster inclusion should the professional side need to call upon him.