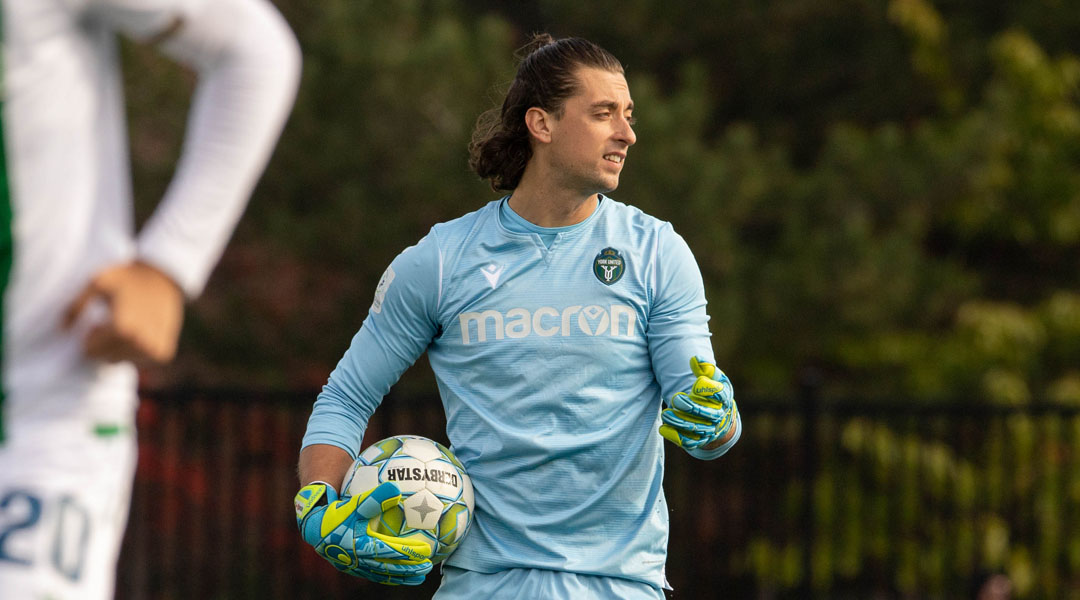 The 28-year-old was substituted out of the past weekend’s 905 Derby following a collision with Woobens Pacius early into the second half. Niko Giantsopoulos stepped in between the sticks for the rest of the match, with the Nine Stripes ultimately falling to a 1-2 home loss to Forge – though they still locked in a playoff position due to results elsewhere.

While the extent of Ingham’s injury is unclear, there will be a significant gap between York United’s final home game and its away trip in the playoffs: with the do-or-die postseason match still about two weeks away, there’s a decent window to assess Ingham’s recovery window. For now, it’s too early to tell.

York United is expected to lean on Niko Giantsopoulos tomorrow, with the goalkeeper having already made eight appearances for the Nine Stripes so far this year. Coincidentally, two of those saw him come off the bench against Forge.

The club has confirmed that FC London’s Eleias Himaras is back training with the team, with the Canada U-17 and former TFC Academy youngster having previously joined the squad during a similar situation back in August.

At that point, Ingham had picked up a groin injury and it was uncertain how long he would be sidelined. The third-year Nine Stripe only missed two matchday squads overall, completing a recovery that came faster than had initially been expected.

The inaugural CPL season saw Nathan Ingham quickly establish himself as the firm starting keeper for York9 FC (now York United), where the golden glove finalist finished with a league-leading 89 saves. He was keen to improve, but saw a tough Island Games campaign see the club bring in a new number one-calibre player to challenge him for the spot.

Ingham has risen well to the challenge, recording six clean sheets from 23 appearances across all competitions this year. The 28-year-old recently came up big with a penalty save against Lukas MacNaughton that ultimately played a big role in his club locking in its first-ever playoff spot.

Ingham has made 61 appearances for the Nine Stripes so far, which ties him with Diyaeddine Abzi as the club’s all-time appearance leader. It is believed his contract expires at the end of the season, though it is unclear if his current deal includes any club options.

While York United states it is lucky to have ‘two genuine number one goalkeepers in the squad’, fans will be hoping to see Ingham back on his feet in time for the club’s first-ever playoff run. With two-time champions Forge FC expected to represent the first hurdle, it’ll be an uphill battle for the young-leaning side.

York United also confirmed that 16-year-old goalkeeper Andrew Romano is no longer with the team, as his developmental permit has expired.