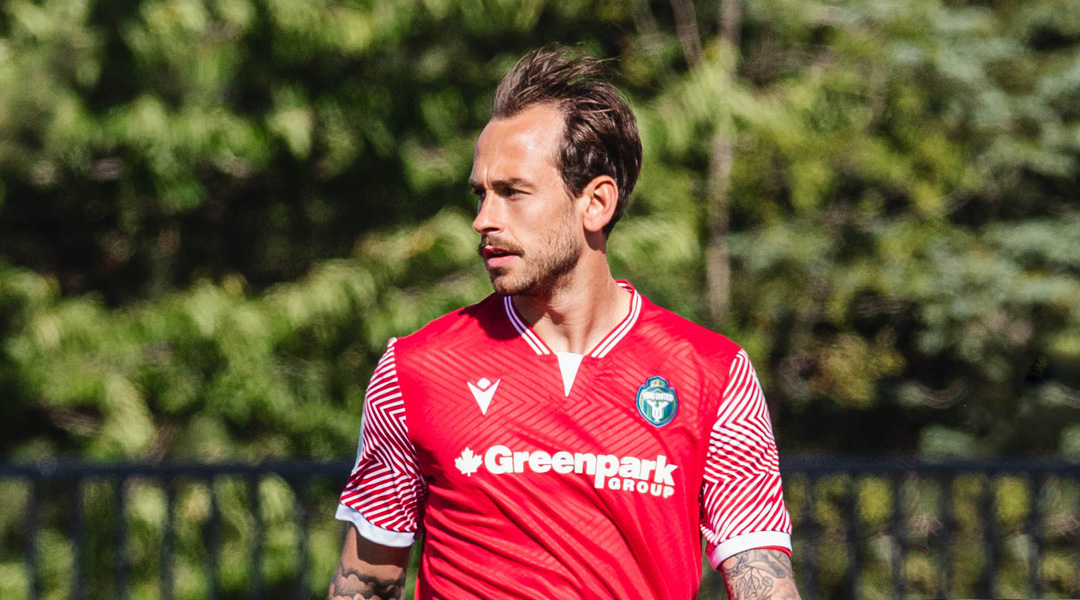 York United goalkeeper Niko Giantsopoulos is in the midst of a banner year, and it’s been a long time coming.

The 27-year-old goalkeeper has been a rock at the back for York United, where he’s landed the number one spot after years of serving in the CPL as a backup keeper. The Nine Stripes have conceded less goals than any other team with him between the sticks, and the current golden glove leader is now set to test himself in a Canadian Championship semi-final tilt against the Vancouver Whitecaps.

It’s a team that, as CPL familiars are aware, he has a unique relationship with.

A wild 36-hour window last month saw Giantsopoulos loaned to the Vancouver Whitecaps in between back-to-back matches against Pacific FC, though he ended up riding the bench for the MLS side for their away trip to Charlotte FC. He was disappointed not to play, but returned his focus to a quarter-final cup tilt against Pacific that saw him provide penalty kick heroics capped off with an iconic, theatrical bow to a jeering crowd at Starlight Stadium.

The fact that Niko is now set to play against a Whitecaps squad that nearly handed him an MLS debut a few weeks ago is a nice story on the surface, but this week’s opportunity to test himself against them runs much deeper than that.

For Niko, this cup tilt is the summation of years of work, of being passed over, and of finally proving that he has what it takes to perform at a higher level. In the midst of a banner year that sees him lead the golden glove race as – finally – a team’s number one goalkeeper, this is absolutely personal.

Niko has come agonizingly close to facing Major League Soccer opposition ever since he returned to Canada from Australia in 2019. The inaugural campaign saw the then-Cavalry man placed between the sticks for victories over Pacific and Forge, but then he got benched for the club’s cup tilts against the Whitecaps and Montreal. Similarly with York, he rode the bench for a second CPL-vs-MLS semi-final against Toronto FC.

After years of being sidelined for the big game, he’s finally set for an MLS clash to call his own.

“In my opinion, it’s long overdue,” he says firmly. “Those other MLS matches were opportunities, and I feel like I missed out on it. My CPL career has kind of been like that, so this whole season has been me now making up for lost time. I’m not taking any single game for granted, every single game has an opportunity to prove my worth as a as a player as a goalkeeper. This cup game is going to be no different. That’s why I’m looking most forward to to it, it’s not really the loan spell with the Whitecaps, it’s very much for 2019 and last season as well.”

Finally A Number One

While York United billed Giantsopoulos as a number one goalkeeper when he signed last year, the 27-year-old found himself second fiddle behind Nathan Ingham, who was had always been the de facto starter under Brennan. Given that Niko’s arrival from Cavalry came out of a need for game time, it was a difficult period for Giantsopoulos, who ultimately stepped in between the posts nine times last season, typically when Ingham was unavailable.

“The way the season panned out, there’s no other way to put it, it was difficult. Again, I think it showed a test of my character that I was able just to keep my head down and continue to work. Listen, I was frustrated that I wasn’t playing. I thought I deserved to be playing but sometimes it gets taken out of your hands and it’s not your decision. Coming into this season, I’m not sulking or crying about it, but I’m doing the work and getting the results.”

This past weekend’s clean sheet against reigning champions Pacific FC was his fifth of the campaign, putting him in the lead for the league’s golden glove race.

With Jim Brennan being sacked at last season’s end and Nathan Ingham departing for Ottawa, Giantsopoulos has grasped the opportunity to own the number one spot under head coach Martin Nash. He’s now played in every single minute of action for the Nine Stripes this year, and he hasn’t looked out of place as the club’s number one shot-stopper.

“It just feels right. I’ve always had the confidence that I could be a top goalkeeper in this league, but I actually just needed the opportunity to prove it to everyone. Listen, I’ve done the work for the last three years. I’ve worked extremely hard. I’ve been humble, I’ve waited, I’ve been patient. There’s only so much time you have in this game, so I don’t know how many seasons I’m going to be in the league, especially as a number one. So right now, I am doing everything I can to prove what I thought this entire time. And so far, it’s going that way. But I’m not taking my foot off the gas anytime soon.”

Like anyone would be, it’s clear that Giantsopoulos was disappointed not to play during his loan to the Whitecaps – but he’s harboring no ill-will, and he’s quite ready should another opportunity come down the pipeline.

“In this game, you always have to take any opportunity when it presents itself. No matter how short or how sudden, I’ll never say no. Obviously my goal is to make to the next level in the MLS, so if an opportunity like that comes I’m gonna say yes, I’m gonna do everything I can to make a good impression and so that I can play at that level or be ready for any opportunity that they’re willing to give me.”

This week’s semi-final will represent a golden opportunity for the 27-year-old to spotlight himself. Now in his final year of contract with York United, it still remains to be seen what’s next for the shot-stopper. They have a club option on him for 2023, but there’s a lot of unknowns.

“I’m getting older and I want to see how high I can take my game and what levels I can bring it to, so I’m definitely pushing to move on,” he admits. “I think the CPL has always been a stepping stone league, but before you even think about that or even say that, you need to do your job on the pitch. We’re almost about halfway through the season now and I think I’m doing well, but it means nothing if I don’t do it in the second half of the season. I’m very much just focused on this year, and then hopefully after that some opportunity can present itself and myself and the club can make some decisions.”

Now en route to Vancouver, Niko has shifted his focus back to the next match. He’s simply looking at it as a semi-final game against another opponent, and he’s trying to help his team to a win. Everything else is at the back of his mind. “I want to win for York United, I want to put in a good performance for my teammates and for myself,” he surmises.

Despite the pressures that come with professional sport, the affable goalkeeper can still hone in on why he does this high-pressure job in the first place.

“For me the most important thing is that I only play soccer because I find it fun,” he says. “If I’m being quite honest, I think I’m good at it. But if it wasn’t fun for me, I don’t think I’d still be doing it – I wouldn’t go through all those hard times if I didn’t enjoy going to practice every single day and playing the game.”

Giantsopoulos and York United will take on the Vancouver Whitecaps this Wednesday at 10:00PM EST. The semi-final cup tilt will air on OneSoccer, fuboTV, Telus Channel 980, and a variety of international cable services.