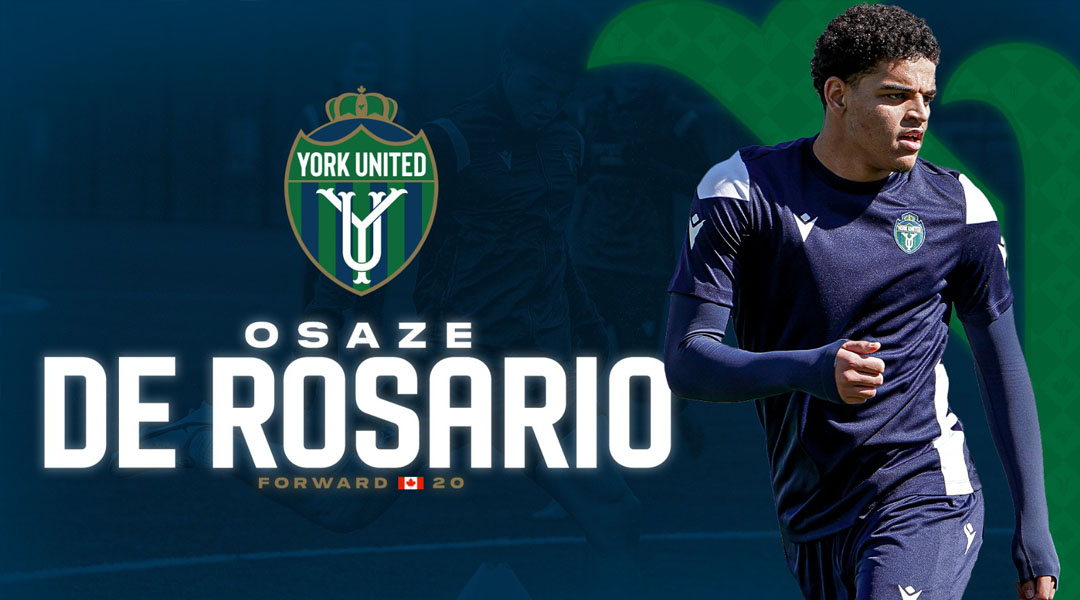 York United his signed Canadian striker Osaze De Rosario to a one-year deal which includes options through to 2024.

The 20-year-old striker had been trialing with the side for nearly a month after cutting his time in Ukraine short ahead of the Russian invasion. Standing at six-foot-two, he now arrives to York Lions Stadium as a young prospect with plenty upside and MLS Academy experience.

De Rosario began his career in League1 Ontario with Toronto FC III, featuring in three matches throughout the summer season. He would eventually switch to the New York City FC academy, spending preseason with the first team in 2020 and bagging two goals and four matches – one of which came against Palmeiras.

Following a short trial with Spanish side CD Lugo last year, the youngster landed a three-year deal with Ukrainian Premier League side Rukh Lviv, but left the club by mutual consent just days before the country was invaded by Russia in February.

Osaze has done really well while on trial and it was the right move for us to reward him with a contract. He’s had a very strange year having played in Ukraine and then coming to an agreement with his club to terminate his deal just nine days before Russia invaded. This is a good opportunity for him and I think we’ll see him making a contribution pretty quickly.

Northern Tribune has learned that he might be on the bench for tomorrow’s season opener, though his inclusion is pending the results of his ITC coming through from the Ukrainian FA.

The son of Canadian icon Dwayne De Rosario, Osaze arrives as a high-ceiling addition who is still finding his footing at the professional level. Given the Nine Stripes’ history of developing talent, the CPL side seems to be a good fit for the youngster.

With centre-forward Lisandro Cabrera still stuck outside of Canada – though he is now just awaiting visa clearance, which is expected soon – De Rosario joins a front line which is predominantly young Canadians: 18-year-old striker Lowell Wright is set for his third professional season, with Mamadou Kane clocking in from the CF Montreal Academy at the same age.

With Wright set for a stint with the Canada U-20 camp later this month, De Rosario is expected to have an opportunity to impress through competitive action in the very near future. With a family name that carries plenty of weight, it’ll be interesting to see how the young striker fares.

York United will begin its fourth Canadian Premier League campaign with a home match against the Halifax Wanderers tomorrow.