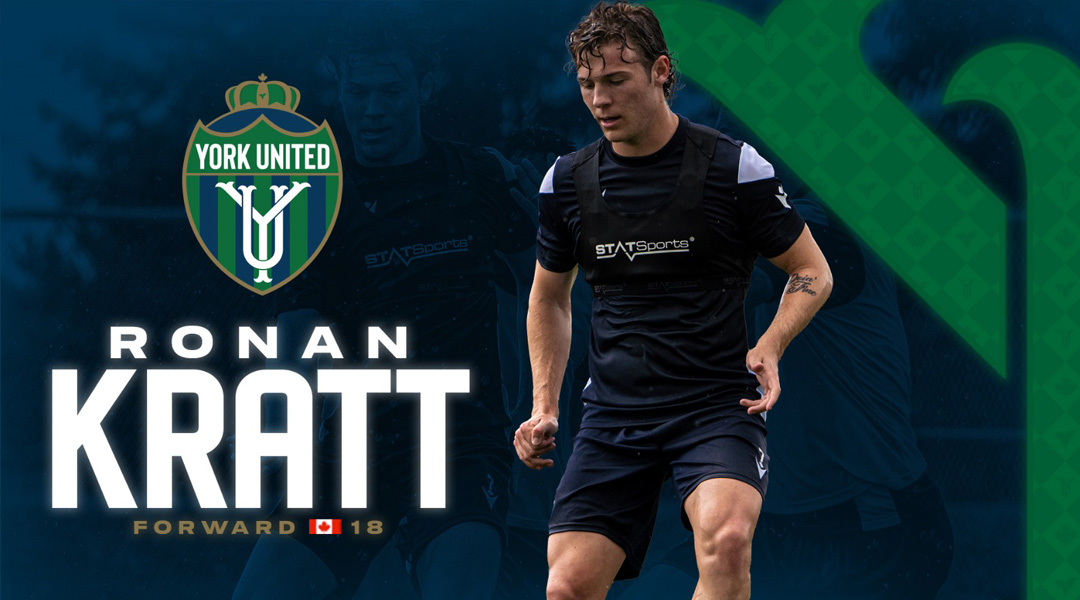 York United has signed 18-year-old forward Ronan Kratt to help the club’s attack. He arrives on a deal through 2023 with an option for a further year.

The young Kratt returns to Canada after a stint with U-19 Bundesliga side SSV Ulm 1846, where the likes of Mario Gomez and Thomas Tuchel once developed. He proved a versatile forward capable of playing on both wings while in Europe, bagging a few goals en route to a WFV Pokal U-19 Cup Final and two roster selections for the Canada U-20 squad.

In effect, he arrives to York Lions Stadium in good midseason form after having found the net multiple times last month in European U-19 action.

Before that, the 18-year-old spent two years at the USSDA’s Barca Residency Academy, where a hot start had seen him bag five goals and six assists from preseason alone.

Kratt had also commited to the Carleton Ravens at the tender age of sixteen, with 2020 seeing him join the team after turning down multiple NCAA Division 1 offers. Similarly, he arrives to York United after turning down offers from other CPL sides and, reportedly, some German clubs too.

While the COVID-19 pandemic prevented him from suiting up under Kwesi Loney – who is also now Atletico Ottawa’s assistant coach – the dual-footed attacker drew praise from the Ravens gaffer for his professionalism and attitude in training, while also suiting up with a few Ravens teammates in PLSQ action with Ottawa South United.

York United finds itself in hefty need of goal production after scoring just six times in its opening ten matches, with their last league goal coming against Forge around a month and a half ago.

“He has the ability to play wide and central,” stated Nine Stripes President Angus McNab, “He’s a very intelligent footballer and when recruiting young guys we need that to see how they adapt and truly find their best role.”

McNab suggests that Kratt’s flexibility will be a significant asset, especially with the club settling in to a variety of formations like the tried-and-true 4-4-2, the 4-2-3-1, and even a 3-4-3. All-told, it remains to be seen whether he’ll find space out on the wing or more centrally near Osaze De Rosario, another reinforcement from Europe.

The Nine Stripes attack lost out on Martin Graiciar through concussion in preseason, with Austin Ricci being recruited shortly before he suffered a season-ending injury.

With Abzi set to depart shortly and Lowell Wright currently travelling with the Canada U-20 team, he’s a timely reinforcement – though he won’t be able to play until his current contract expires on July 1.

While it remains to be seen if the son of Zoboomafoo star Martin Kratt can tame the beast that is the CPL, it’ll certainly be interesting to see how the Canada U-20 prospect fits at the CPL level he’s aimed for since he was in highschool.

Kratt arrives on a deal that runs through the 2023 CPL season with a club option for a further year.

The club also confirmed the arrival of North Toronto Nitros midfielder Aidan Hugo on a developmental permit, while youngster Arjan Khela has moved on.

We’ve also discovered that a new international arrival is set to be announced in the near future, too – and he’ll be the first from his country to ply his trade in Canada’s domestic league.