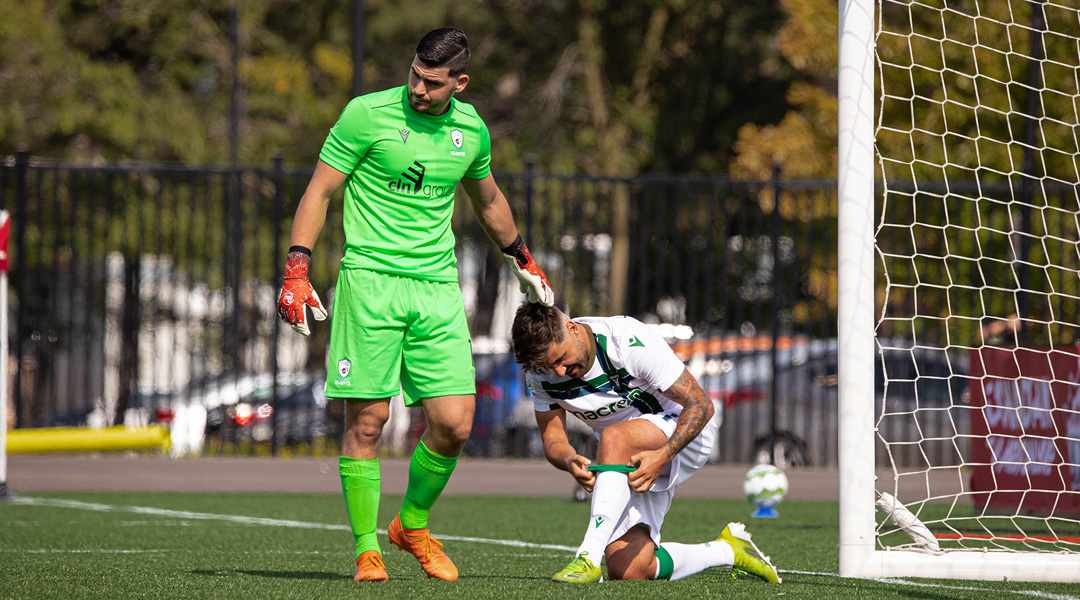 League1 Ontario side Master’s FA has announced that it has loaned goalkeeper Spiro Koskinas to York United for the remainder of the CPL season.

Koskinas will take a bench role behind Eleias Himaras while first choice keeper Niko Giantsopoulos recovers from an ankle injury expected to keep him out of the action for a few weeks.

The 25-year-old League1 Ontario goalkeeper will get a chance to showcase himself in Canada’s top flight after helping Master’s FA to their first League1 Ontario title in 2019, with him featuring for the side regularly since.

Koskinas also had some experience playing abroad in Sweden with Hedens IF and with Cyprus third division side Amathous Agiou Tychona, and had also spent time with Toronto Skillz FC, too.

The Canadian-Greek goalkeeper had played against his new side during Canadian Championship action last year, when Master’s FA were soundly defeated 5-0 by the Nine Stripes in the opening round.

Flashback: Master’s FA Confident ‘Fans Will Get Their Money’s Worth’ In Cup Clash

Koskinas is far from the first emergency goalkeeper picked up by the side this year, with York United undergoing plenty of rotation through a string of injury misfortune.

This season saw new arrival Matthew Nogueira sidelined by a knock in preseason, with Gianluca Catalano then largely filling in from the bench. The club pulled in a 15-year-old goalkeeper when Nogueira no-showed for a league match, with Eleias Himaras eventually replacing him on the roster.

Himaras, who also spent time in League1 Ontario this season, is now starting in lieu of the sidelined Giantsopoulos. Svyatik Artemenko most recently featured as a backup for Himaras, with Koskinas now set to take that role as Artemenko returns to his post-secondary studies.

With York United hopeful that Niko Giantsopoulos will be fit in time for York United’s three match homestand this September, it remains to be seen if Koskinas will get an opportunity to debut for the Nine Stripes.

He will have some familiarity with the squad, having trained with the team during preseason – though there are a lot of fresh-faces who have been added since then.

Koskinas has traveled with York United ahead of their match against Cavalry FC tomorrow.