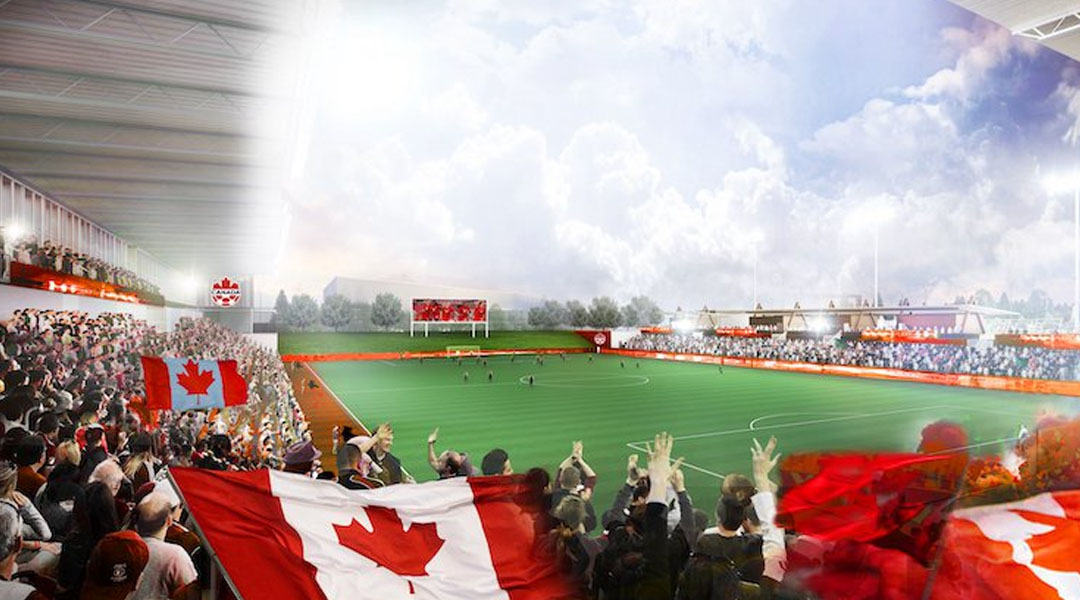 If all goes to plan, York United will soon have its own stadium to call home.

Today’s announcement comes after plenty of hard work from both the York United front office and its owner Greenpark Group, the residential and commercial construction company that is also York United’s owner and principal partner.

The new soccer-specific stadium and its training facility are set to be located on Woodbine’s property within walking distance of the pre-existing Woodbine Racetrack.

York United’s future home ground will boast a seating capacity of 8,000, which appears to be the sweet-spot for CPL: large enough that a sellout crowd is still highly profitably, but small enough to prove an intimate venue at the CPL level.

Provided that the plan’s zoning gets approved, the first phase of the project could be ready in 2023. Woodbine Entertainment states that the stadium and high performance centre are being developed by global soccer venue design firm Populous, with additional input from both the Baldassarra family and Greenpark Group.

“We are a family of builders and share Woodbine’s vision of creating communities for a better Toronto,” said York United Chairman Michael Baldassarra. “We have been so proud to invest in the future of Canadian soccer in recent years and a high-performance training centre and stadium is perfect for what is to come as we see the women’s game poised to take giant leaps across the county.

The arrangement will also see a 38,000 square foot training facility that will include a FIFA-standard grass surface for the Nine Stripes to train on rather than the Ontario Soccer Centre and York University.

Fans wondering about their stadium commute will be happy to learn that a GO Station is planned for the area, with the Ontario government having announced plans for such a stop back in 2019 for the Kitchener GO rail line. Both the province and Woodbine Entertainment have partnered with Metrolinx for this venture.

Woodbine Entertainment owns about 684 acres of land in this specific area, roughly 250 acres of which is already dedicated to the company’s investment in horse racing.

The release also indicates that the group behind the project are expecting it to be home for a future women’s team in a domestic professional league, with York United Club President Angus McNab indicating that the Nine Stripes are directly involved in this.

“The 2026 World Cup is an amazing target for so many of us working in Canadian Soccer right now, but before there many other major events that Canadian athletes will need to prepare for,” said McNab, “facilities and infrastructure for the professional game to thrive are required and this location is ideal. We would also be very proud to plant the flag to bring the first women’s professional team to Canada as part of a much-needed domestic league.”

The club had previously expressed interest in hosting a women’s League1 Ontario team, but that project was sidelined and appears to have been replaced by fully professional aspirations.

The stadium and training centre additions are part of the Woodbine Community Plan, which intends to develop the land into a mixed use, large-scale urban community. The plan is expected to create upwards of 17,000 jobs as it comes to fruition.

York United is set for its fourth season at York Lions Stadium, a venue the club rents from York University. This season will see the club share the ground with the Toronto Arrows, Toronto FC II, and university sporting teams.

While 2021 saw York Lions Stadium undergo renovations that expanded the pitch and replace its natural grass surface with FIFA Quality Pro turf, the club’s status as a tenant was never an ideal, permanent situation for the professional sporting side.

York United has always made it clear that the ambitious CPL side has never stopped seeking out a permanent stadium solution, though it’s fair to say that today’s announcement comes sooner than most would have thought possible.

We’ll keep you posted as more news about the new soccer-specific stadium comes to fruition.