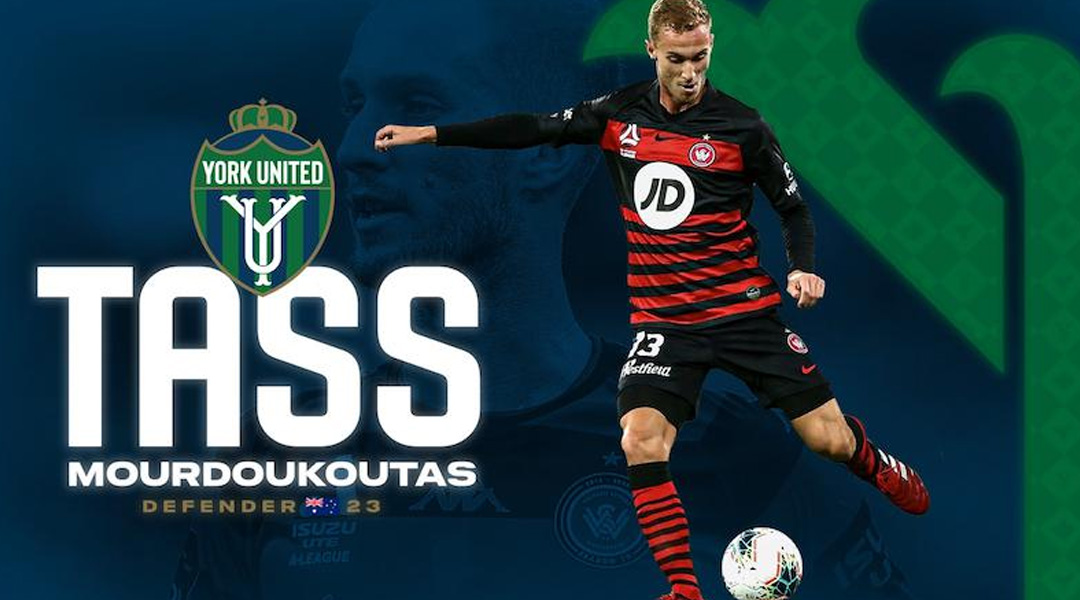 The 23-year-old centre-back arrives to York Lions Stadium after spending five seasons in Australia’s top flight with the Western Sydney Wanderers, amassing 44 appearances for a top flight side in which he appears to have left quite a positive impression.

The intriguing international recruit has now inked a deal with York United runs through to 2023.

Tass had first joined the Western Sydney Wanderers in 2017 after developing at the youth level with Football New South Wales Institute and Sydney Olympic, and carved his way up to a senior debut the following year.

Mourdoukoutas has also earned nine caps for Australia at the U-23 level, where he helped the side reach the AFC U-23 Championship semi-final stage two years ago. He arrives to the Canadian Premier League in good form, having last played for the club a month ago in a 1-1 draw against Macarthur FC.

“With my qualities on the park, I want to help the team grow to new heights and also add to the already-instilled hunger within the group, and the clear vision that’s been set out for the developing players,” said the new signing. “I’m so excited to have arrived in Toronto and am absolutely buzzing to meet all the Nine Stripes fans. I can’t wait to get going and play my part in pushing us to the top of the league, where this club belongs.”

The 23-year-old has already watched the video for several York United matches, stating that the group looks well-organized with a real sense of solidarity. He’ll slot into a defensive line that holds the best defensive record of the season, conceding just seven goals in eleven games.

“We are delighted to have secured Tass and have him join the club,” added Club President Angus McNab. “Tass has some good experience in the A-League and we received some really positive feedback on him from Carl Robinson who worked with him at Western Sydney. Barry [Smith] also got really encouraging reports on him from guys he’d played with and who are now well connected in Australia.”

Tass arrived to Toronto on Wednesday night and will be available to play once his ITC clears in the upcoming transfer window. He won’t be the only summertime reinforcement, with the club adding Ronan Kratt to the ranks.