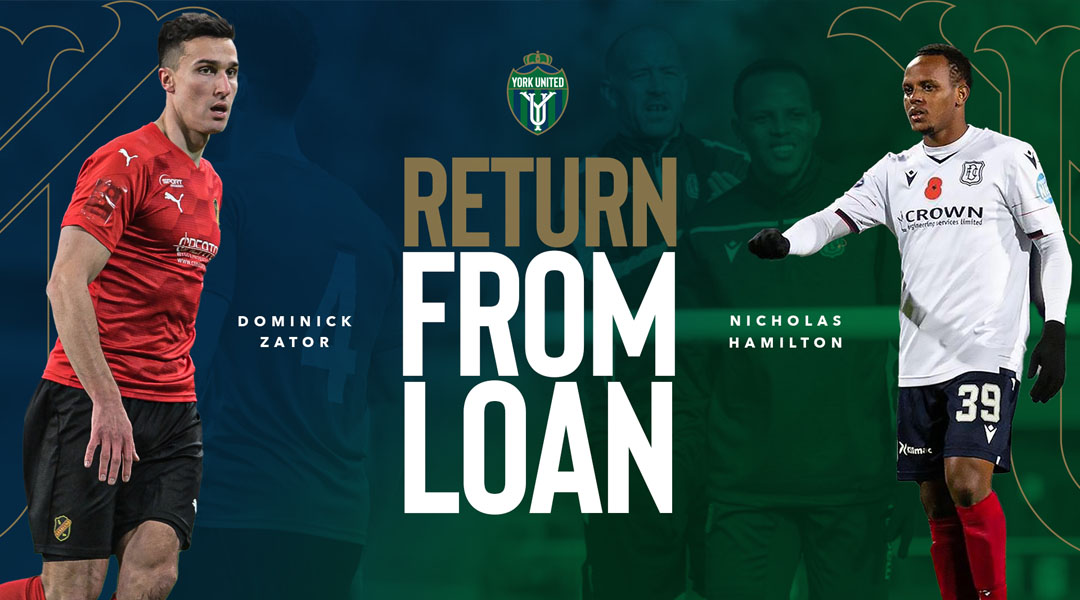 Canadian Premier League side York United has confirmed that Dominick Zator and Nicholas Hamilton are both set to join the club following their respective loans to Vasalunds IF and Dundee FC.

Last week saw the club announce the return of Michael Petrasso, who racked up double-digit goals whilst on loan with Barnet FC during the prolonged CPL offseason.

It was just a few months ago that the surprise move of Dominick Zator from Cavalry FC to York United took place, with the six-foot-two defender arriving on a multi-year deal. The defender was quickly sent on loan to Vasalunds IF, where he made an impressive friendly debut in February. The centre-back ultimately appeared in four of the club’s eight league matches since then, accumulating 149 minutes of game time.

While Duane Rollins claimed that his move to York United was a ‘paper move’ and that he wasn’t expected to suit up for the Nine Stripes for the 2021 CPL season, Club President Angus McNab responded that the theory was absolute nonsense. With Zator now York United-bound for the 2021 CPL season, it looks like the club will indeed be bolstered by the strong defensive addition.

Dom has gotten significant minutes and been working hard when he’d otherwise have been shut down and unable to train. From chatting to him regularly, I know that he loved his time at Vasalunds and it was fantastic he could play 90 minutes and sign off with a clean sheet in his final appearance.

There was less game time to be had for Jamaican forward Nicholas Hamilton, who was signed by the club last year but ultimately couldn’t take part in The Island Games due to travel restrictions caused by the COVID-19 pandemic.

After being loaned to Scottish Championship side Dundee FC last September, the 25-year-old found himself quite limited in terms first team opportunities: the Kingston-born forward’s only appearance came in the final minute of a League Cup match against Cover Rangers, which is sure to prompt questions regarding whether he’ll be able to fight for a place in a York United roster.

To that end, McNab suggests that fans should have patience with Hamilton, who joined the side following a long period of inactivity and was thrown into a full-time footballing environment for the first time.

Context is always important in these situations and he’s been thrown into an environment having coming off a long period of inactivity. He was also experiencing a full-time and elite situation for the very first time. Most importantly, the staff at Dundee have looked after him fantastically well and you can see from the pictures of the promotion celebrations that he’s built some great friendships with his teammates there. I’m sure we get him back a better and fitter player.

In a conversation with Northern Tribune earlier this year, Cavalry FC Captain Nicholas Ledgerwood also touched on the subject of international player turnover, suggesting that clubs needs to give these arrivals patience as they adapt to the local environment.

With Hamilton’s loan now finished, the Jamaican forward is currently in the United Kingdom awaiting for his visa to be processed. Once this step is completed, he is scheduled to fly to Canada and begin quarantine ahead of the 2021 Canadian Premier League season.

The club has already confirmed that international signings Alvaro Rivero and Julian Ulbricht have arrived in Canada. The travel availability of Sebastian Gutierrez and William Wallace remains unclear.

With internationals Lisandro Cabrera and Mateo Hernandez now the only York United players still out on loan (and with their arrivals still pending visa approval), McNab has already suggested that the Nine Stripes will be looking to make additional roster moves which could mitigate the potential loss of foreign talent. At the same time, recent comments from Rob Gale suggest that updated roster rules could allow more breathing room for U SPORTS athletes, too.

Fans and players alike are still waiting on firm details regarding the 2021 Canadian Premier League season, which the league states will kick off in either mid-June or early July from a single location. It’s looking like the latter is the only realistic choice at this point, with York United and Forge FC still having been unable to train under provincial lockdown restrictions.