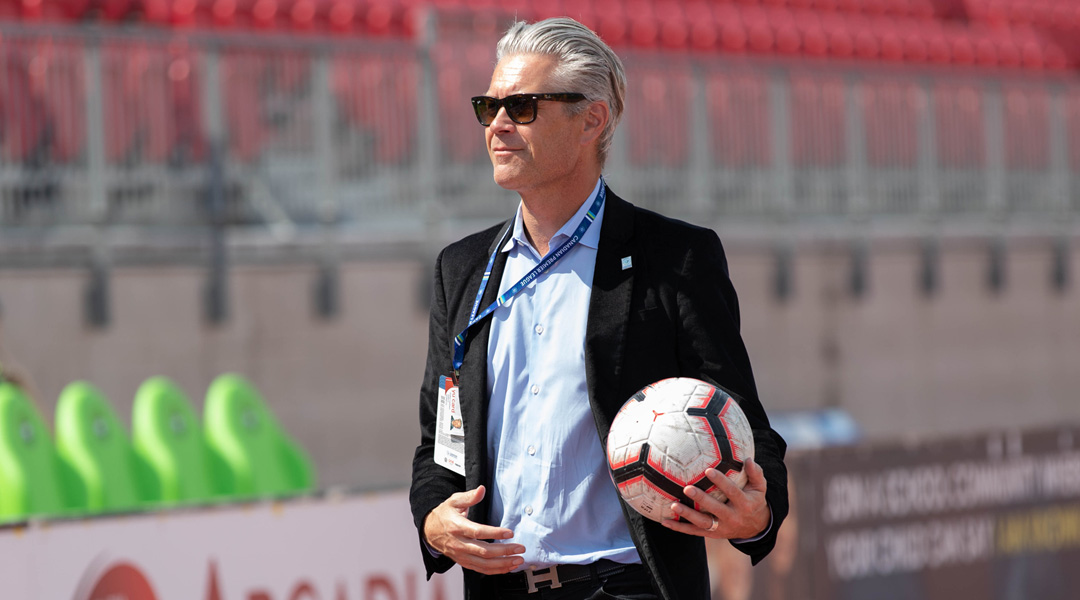 Earlier this morning, York9 FC club president Preben Ganzhorn sent out a letter to season ticket holders thanking them for their support during the inaugural season, while simultaneously discussing some large-scale changes to come in 2020 and beyond.

For starters, Ganzhorn has announced that that ticket prices for the next season will be adjusted across the board. It’s a move that makes sense given that York9 FC has averaged just 2,696 fans per game for its inaugural campaign, which is the lowest average in the league.


Ganzhorn wasn’t ready to delve into specifics for these ‘across the board’ pricing adjustments, but fans can likely rest assured that their 2020 season ticket renewals will come in at a lower price. Like all other CPL clubs, the 2020 season ticket will include an annual subscription to OneSoccer, though Ganzhorn promises that some other as-yet-unannounced goodies will be included, too.

The next big change coming for the Nine Stripes is that the supporters’ section is moving from the north end: Preben states that isolating the most vocal supporters from the rest of the crowd hasn’t been a practical move. The new supporters’ section will be in the southern end of the main grandstand, and while it may not be safe-standing, Preben states that supporters in the grandstand can still ‘stand, sing, bring tifo, bring banners, and bring instruments’ into the seated area.

It’s not yet clear how the north-end supporters will react to the move away from a safe-standing environment, which has been a big draw for the likes of rowdy supporters’ group Generation IX. While the club currently has something in mind to replace the northern safe-standing section, it wasn’t yet ready to discuss what that would be.


While Preben didn’t state if OneSoccer would make any adjustments to actually begin showing the main grandstands in 2020, the club has confirmed that it is in discussion with MediaPro to have cameras facing the main grandstands. One has to imagine that if York Lions Stadium proper begins to show up in streams, having the supporters’ section in the southern end of it ought to make for a much better-appearing atmosphere.

Of course, York Lions Stadium was never intended to be the permanent home of the Nine Stripes. To that end, the club president assures fans that his club has made some recent strides in finding a location for a permanent stadium site, though he isn’t yet ready to say where that is. Prior to 2019, the club had planned to use the York University-based stadium for 2-3 years while its own modular soccer-specific grounds were constructed.

For the near future, however, York Lions Stadium will remain the home of York9 FC. The athletic track that surrounds the pitch and has forced York9 FC to play on a tighter field than other Canadian Premier League clubs will remain for the next season, which was a decision outside of York9 FC’s control: Toronto is hosting the 2020 Masters Athletics Championships, so Athletics Canada needed the track to remain.

Ganzhorn did state that aside of the track, however, a new configuration to improve the gameday experience inside the stadium would be awaiting fans in the near future. This will include a gate at the southern end of the stadium being opened to alleviate the bottleneck of fans entering through the stadium’s north side.


The Nine Stripes are currently in third place for what has been a real ‘Jekyll and Hyde’ season for supporters: the club has shown great quality in some of its victories, but individual mistakes have botched the club’s chances of putting together consistent results. To that end, York9 FC gaffer Jim Brennan has begun looking at what adjustments need to made going forward: make no mistake, many of the Nine Stripes players are now fighting for their jobs as the inaugural season comes to a close.

Whatever happens in the future, York9 FC club president Preben Ganzhorn seems committed to adjusting the formula to help his club fill out the stands, keep fans happy, and build a competitive professional soccer club in the York Region. Much like the league’s plans for expansion, things won’t be totally wrapped up for 2020, with adjustments likely to come year-over-year to help both club and league continue to grow.