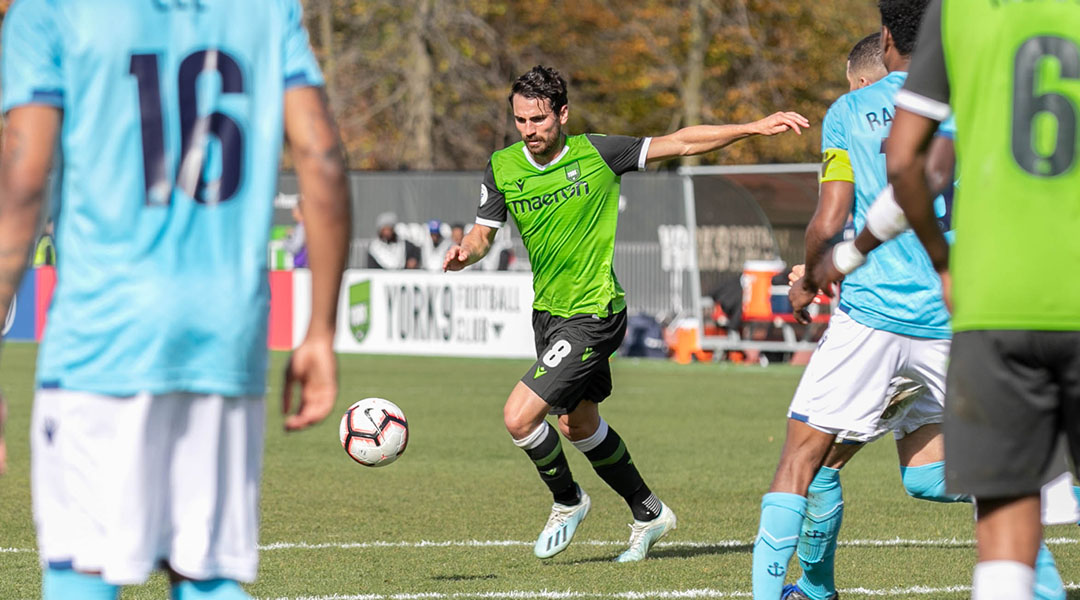 In a rush? Scroll to the bottom for the current roster at a glance.

Canadian Premier League side York9 FC has provided a massive update regarding its current roster, revealing who’s out of contract, who has re-signed, and who is parting ways with the York Region side.

As expected, Joseph Di Chiara is the big outbound figure, while many core players like Luca Gasparotto, Roger Thompson, and Manny Aparicio are now out of contract. Without further ado, let’s take a look at what today’s roster update means for the club:

As we reported last week, the addition of Jordan Wilson has come in the form of a Joseph Di Chiara replacement, with the Nine Stripes midfielder poised to capitalize on his highly successful Island Games campaign with an intra-league roster move. While Cavalry FC is his suspected destination, his new club remains unclear. Whatever unfolds, his time with the York9 FC has come to an end with the club releasing him at his own request.

Notably, team captain Manny Aparicio is listed as out of contract, with the fiery freekick specialist expected to be a big miss for the Nine Stripes should he go. It would also explain why we heard Dylan Carreiro was already in talks with the side as he departed from Valour FC: with one 25-year old captain-caliber attacking midfielder potentially departing, it only makes sense to bring another one in.

One source close to the club revealed that the team captain was expected to depart, though the move isn’t set in stone as of yet.

Kyle Porter’s contract is also set to expire come the end of the month, and like Matthew Arnone his departure appears certain. The 30-year-old former DC United man is exploring opportunities both at the intra-league and international level, and the proverbial ball would be in York9 FC’s court if he was to remain. So far, he looks closer to leaving than staying.

Oft-undersung midfielder Wataru Murofushi is also out-of-contract, with another source indicating that he isn’t likely to return. Murofushi has played well across his 36 appearance for the Nine Stripes, with the club’s oldest international (at just 25, mind you) scoring three goals along the way.

We continue to have discussions with a number of players who are out of contract and there are some we would like to retain. I’m sure there will be announcements regarding a number of these guys in the coming weeks.

The futures of Telfer and Mannella are all up in the air, with the duo both out-of-contract as well. This year saw Telfer return only after a move to Cyprus failed to take root, with Mannella spending most of the Island Games campaign injured with one source indicating an intra-league transfer was in the works. It’s suspected that this duo are two players that the Nine Stripes would like to re-sign, but it all depends on how the off-season takes shape.

Gabriel Vasconcelos, who came in as a highly-touted Corinthians product, spent most of the season on the bench after a lackluster debut. York9 FC has officially declined his option for the next season, with the club also releasing Argentinian Brian Lopez and teenage goalkeeper Ezequiel Carrasco, which falls in line with what we’d said last week.

Fans can expect Carrasco to continually help the side with training, which is something he’d been doing for some time prior to signing with the club after Colm Vance had left.

The midfield will also be bolstered by the addition of Mateo Hernandez on the wing next season, with Michael Petrasso also set to return in June following his loan to Barnet.

The club’s starting goalkeeper, Nathan Ingham, is under contract for next year’s campaign. He was the first player to re-sign for 2020, with rumours indicating he’s on one of the best goalkeeper contracts in the league. The club had already re-signed fullback duo Morey Doner and Diyaeddine Abzi months ago, so their returns were already a known event.

The latter half of the Island Games campaign saw Abzi deployed as a direct winger, which is the position he played for AS Blainville prior to York9 FC converting him into a full-back. This is something fans might see next year, especially if the club triggers its option for Japanese left-back Fugo Segawa next season.

Change is also afoot in the defensive third: While Luca Gasparotto and Roger Thompson are both out of contract, we’ve been stating that Gasparotto has been expected to depart following failed contract negotiations. Ultimately, it’s not looking like fans should expect him back. While Thompson reportedly has other offers on the table, his re-signing depends on pending contract negotiations.

We are a salary-capped competition so there is going to be off-season movement most seasons. For me this is a positive as it shows the league is continuing to evolve. We’ll get some deals done and with others we won’t agree on a valuation and move on. That’s the business of football and I do not begrudge any player the opportunity to earn more somewhere else. We wish them the best and thank them for their efforts in a York9 jersey.

The club has brought in 18-year-old Toronto FC Academy youngster Ryan Lindsay for defensive depth, but fans may want to brace themselves for the best case scenario that their multi-season iron man is departing, and for the worst case scenario of a complete centre back overhaul.

Up top, Real Madrid academy product Alvaro Rivero has re-signed with the Nine Stripes, with last-gasp 2020 signing Jace Kotsopoulos now out of contract. After struggling to produce goals from open play at The Island Games, fans will be hoping that German forward Julian Ulbricht can inspire some creativity there, while the belated arrival of Nicholas Hamilton depends on if his move to Dundee results in a contract offer from the Scottish side.

With nine players out of contract and five already released, this offseason seems poised for a roster rebuild of significant size. As club president Angus McNab said following the club’s fifth-place finish, they’d have nobody but themselves to blame if they didn’t make changes.

Here’s the quick view of the York9 FC 2021 Roster at the present: