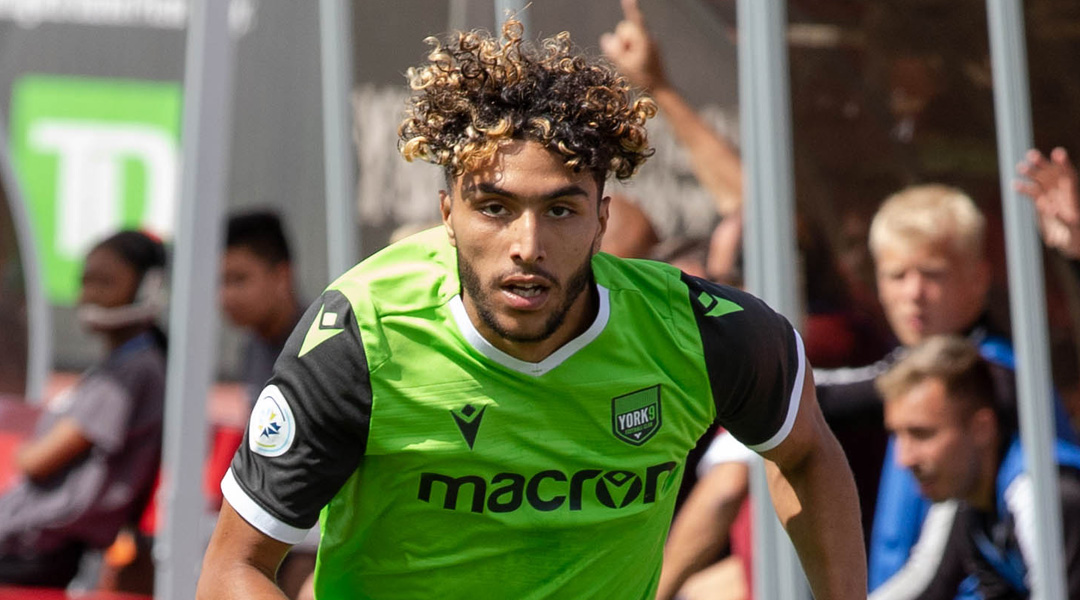 The 21-year-old full-back had already re-signed with York9 FC ahead of the 2020 season last December, with today’s news meaning that the York Region side have now extended the services of both of its starting full-backs. Morey Doner signed a one-year extension last week.

This club has meant so much to my development. This is my first pro club and I’ve come so far since I started, and I know the coaching staff see that as well. I’m really excited to be staying here and keep getting better.

Last year saw Diyaeddine Abzi arrive to York Lions Stadium as a winger from PLSQ side AS Blainville, with Jim Brennan and former assistant coach Carmine Isacco molding the youngster into a left-sided full-back. The Morocco-born athlete adapted well to the position, putting in consistent performances which eventually saw him earn a nomination for CPL’s Best Under-21 Canadian Player of the Year.

His eye-catching performances from the inaugural CPL campaign also saw him included in the provisional 50-man roster for Concacaf Men’s Olympic Qualifying Championship which was due to begin in late March, but was ultimately postponed due to the COVID-19 pandemic.


While he’s now commited his next two years with the Canadian Premier League said, Abzi hasn’t shied away his ambitions to jump up to a higher level of play: he’s earmarked Major League Soccer as a destination he’d like to jump to in a year or two.

Diyaeddine established himself as a first-team regular in 2019, and we feel that this deal gives him some stability and us the best left-back in the CPL for multiple seasons to come.

With the 2020 Canadian Premier League season featuring a stark level of uncertainty due to the COVID-19 pandemic that has put all forms of Canadian sport on pause, York9 FC appears to be the first club extending contracts to ensure roster stability for the next calendar year, too. This Monday, the club signed 18-year-old Toronto FC Academy product Ijah Halley to a multi-year contract.


The York Region side currently has 22 players on the roster, with the club now utilizing all seven of its allocated international roster spaces under the tutelage of Angus McNab. While the core roster of players who took part in the club’s third-placed finish last year have returned (barring two noteworthy exceptions in Ryan Telfer and Rodrigo Gattas), the club has brought in plenty of high-profile replacements in the likes of Michael Petrasso, Chris Mannella, and internationals like Gabriel Vasconcelos and Adrian Ugarriza.

The financial terms of Diyaeddine Abzi’s contract with York9 FC were not disclosed by the club.