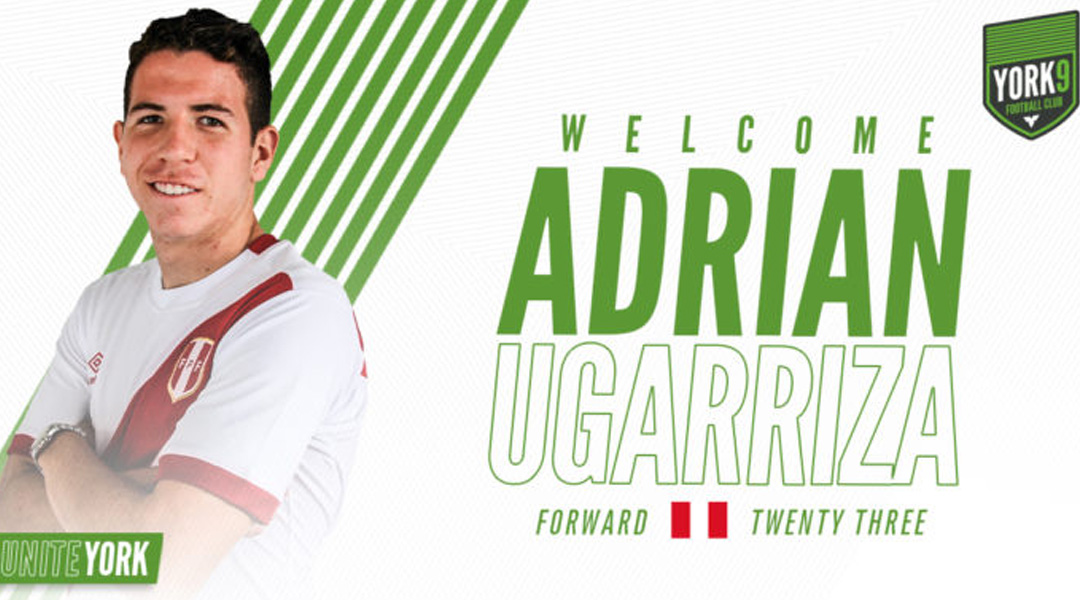 The Nine Stripes have signed the club’s second out-and-out striker in Peruvian centre-forward Adrian Ugarriza, who was just officially announced by the Canadian Premier League side today.

Ugarriza’s contract includes a multi-year option, and is subject pending to his international transfer certificate and work permit.

The 23-year-old arrives to York9 FC after spending his entire career in his native Peru, where he made 46 appearances in the country’s top flight while also featuring in a handful of cup matches in the Copa Sudamericana. In-all, the six-foot-one striker has made 93 appearances over the course of his career. He’s also made eleven appearances for the Peru U-20 national team, though he hasn’t received a call up to the senior side so far.


With good technical ability and a proven threat in the air, Ugarriza arrives to a York9 FC side in need of replacing the likes of proven goalscorer Rodrigo Gattas and the physical presence of Simon Adjei.

Here’s a highlight reel that will give Nine Stripes fans a good look at their new centre-forward:

Ugarriza becomes the third Peruvian athlete to be signed to a Canadian Premier League side following the league’s centralized scouting partnership with 21st Club, which resulted in the signings of Cavalry FC’s Jair Cordova and FC Edmonton’s Raul Tito.

The new York9 FC signing is represented by AGREF, who also represent former Halifax Wanderers left winger Juan Diego Gutierrez. He was one of the sixteen players released by the squad following its last-placed finished in the inaugural CPL season.

By chance, Ugarrizi, Tito, and Gutierrez had all spent time with Peruvian top flight side Universitario de Deportes.

Here’s what Nine Stripes managing consultant Angus McNab had to say about the club’s latest signing:

Adrian’s signing is another important milestone as we assemble the 2020 roster. He is a player who immediately caught our eye when we looked at him. Jimmy Brennan used his network of contacts and got more positive feedback so it was an easy decision. We have a multi-year option on his contract and he is another player where we benefited from the league’s support with their international program, supported by initial analysis to aid talent identification from 21st Club.

Adrian Ugarriza becomes the club’s fifth international signing for the upcoming season. Midfielder Wataru Murofushi was the only international to stay on from the inaugural campaign, while the club has also added Japanese left-back Fugo Segawa, Brazilian midfielder Gabriel Vasconcelos, and Jamaican striker Nicholas Hamilton.

Ugarriza and Hamilton currently represent the team’s only out-and-out strikers, though rumours about the potential signing of former Toronto FC striker Molham Babouli have persisted ever since the player was seen training with York9 FC ahead of the club’s official preseason.


Ugarriza had been a free agent ever since departing from Alianza Lima when the calendar year turned to 2020. With York9 FC parting ways with Simon Adjei one month later, it looks like the signing of the Peruvian striker was likely in the works since at least January, with his arrival knocking down Adjei’s spot in the pecking order and resulting in the mutual termination of his contract.

York9 FC did not disclose the financial compensation due to Adrian Ugarriza through his contract, which features a multi-year option.