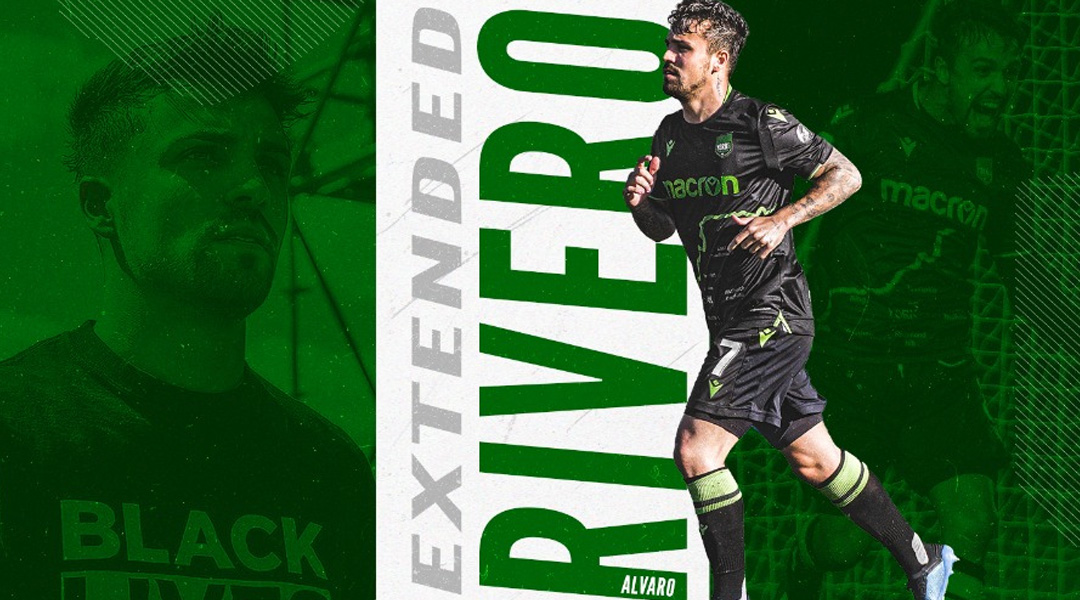 After bringing in Real Madrid Academy product Alvaro Rivero just ahead of The Island Games, York9 FC has re-signed the Spanish striker for the 2021 Canadian Premier League season.

The move includes options for both the 2022 and 2023 seasons as well, with the contract including further ‘long-term performance incentives’, which is an aspect of player contracts not usually disclosed by CPL clubs.

The 23-year-old striker appeared in all seven of York9 FC’s Island Games matches after having only met the squad in Charlottetown due to his quarantine requirements following his arrival in Canada. Despite the lack of preseason training, he bagged a superb goal from open play against Pacific FC in his 359 minutes of action.

While Aparicio impressed with his freekicks, creating goals from open play was an issue for the Nine Stripes. That’s something Club President Angus McNab hopes Rivero can help with in the seasons to come:

We saw enough in Alvaro that excited us to bring him back. His finish against Pacific was exceptional and we need to manufacture a lot more opportunities for him and all of our forwards next year. Our creation of opportunities in open play was certainly the most disappointing aspect in 2020 and we’ll work hard this off season to look at how we train and who we bring in help that.

Rivero – who has been taking English lessons after he signed on with the club in late July – is set to be joined next year by German striker Julian Ulbricht, who is currently playing with German fourth division side Phonix Lubeck ahead of the 2021 Canadian Premier League season.

The club has largely relied on foreign strikers even before McNab’s arrival, with the 2019 Nine Stripes squad seeing Rodrigo Gattas and Simon Adjei get most time up top.

Jamaican forward Nicholas Hamilton is currently on loan with Dundee FC, though his move may be made permanent if he impresses over in Scotland. To that end, there are a lot of roster uncertainties regarding the Nine Stripes squad, with the future of players like Ryan Telfer, Joseph Di Chiara, Kyle Porter, and Chris Mannella still uncertain.

Local defender Matthew Arnone is set to depart, with rumours indicating that Luca Gasparotto has yet to come to terms with a salary proposal from the club.

In terms of who’s staying, the club’s teenage contingent are near-unilaterally locked in to multi-year contracts. This week, the club re-signed former Aurora FC youngster Max Ferrari to a long-term deal. Full-backs Diyaeddine Abzi and Morey Doner also re-signed for 2021 earlier this year.

McNab is in the midst of securing further offseason loan moves for members of his roster, with the York Region side recently sending Michael Petrasso over to England to play with Barnet. Prior to that announcement, the 25-year-old inked a two year deal with the club.

With Rivero now on the books to have a proper chance to train and gel with the team prior to his second season with the Nine Stripes, fans can expect the former Real Madrid Academy product to earn his first full ninety for the York Region side come 2021 – and they’ll be hoping he can procure more goals from open play, too.