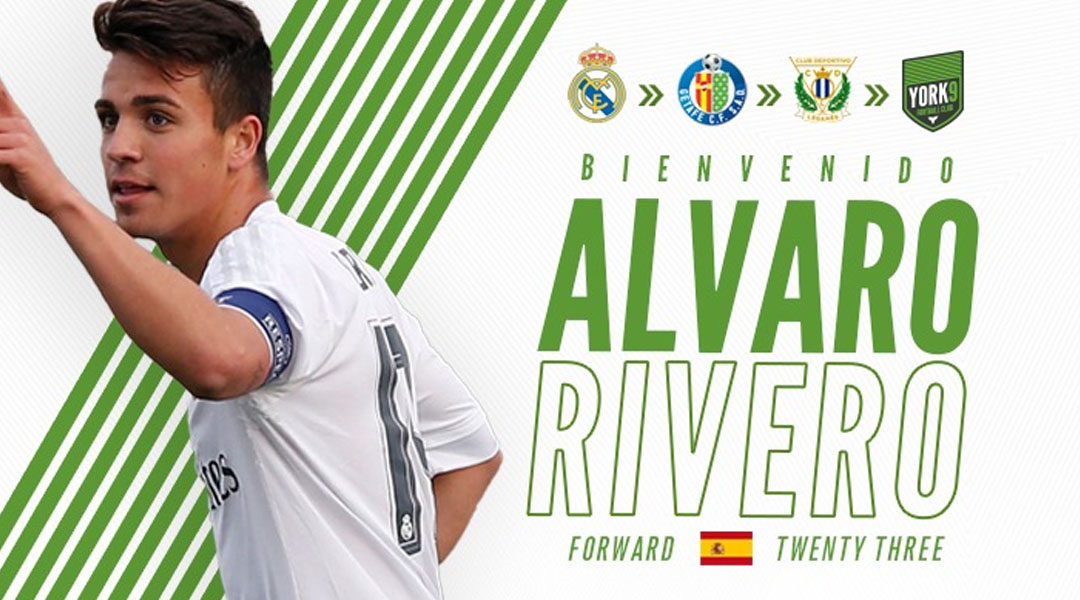 With the 2020 Canadian Premier League season expected to kick off in mid-August, York9 FC has wasted no time in securing the services of a new international striker following the releases of Adrian Ugarizza last week and Jaco today.

Jaco’s departure marks the third time a York9 FC international has been released without stepping foot in the country, though few would have predicted the extent of the COVID-19 pandemic when he was signed in early March. His release freed up a roster spot for today’s new high-profile transfer.


This morning, the Nine Stripes announced the capture of 23-year-old Spanish striker Alvaro Rivero, who has already arrived in Canada and will be quarantining for 14 days. The Real Madrid Academy product arrives from Tercera Division side Deportivo Leganes B, where he was on a short-term deal.

York9 FC had actually entered discussions with the Madrid-born striker back in January after he was scouted by 21st Club, with McNab keeping the bridge open for a future move. All-told, securing his work permit and getting him into the country came together very quickly ahead of the 2020 CPL season.

I knew it was just a short-term agreement that he had signed, so he never really came off our board. When Adrian was released, we picked up the conversation and the opportunity is a good fit for everyone.

The 23-year-old striker has jumped around a few lower division clubs following his time with the Real Madrid U-19s, where he played alongside players like Achraf Hakimi and Luca Zidane. Rivero has since played for Rayo B, Inter de Madrid, Las Palmas Atletico, Getafe CF B,and most recently Deportivo Leganes B.

Rivero once captained the Los Blancos academy side in UEFA Youth League action in 2015, scoring a brace against Malmo FF. While he hasn’t exactly been prolific in his senior career, his new opportunity in Canada could see him take advantage of a fresh start.


Having trained with the Real Madrid Academy from the U-9 to the U-19 level, it’s fair to say he arrives to the York Region side with quite a high pedigree, much like Corinthians product Gabriel Vasconcelos.

York9 FC did not disclose the contract length or financial details of Rivero’s signing. The club has now used all 23 available roster spots, using up six of seven allowed international slots – though Brian Lopez and Nicholas Hamilton have yet to secure a permit to arrive in Canada.

The Canadian Premier League is expected to announce plans for a 2020 season this week, with the tournament taking place in PEI and running until mid-September, at which point the first round of the modified Canadian Championship will be played.