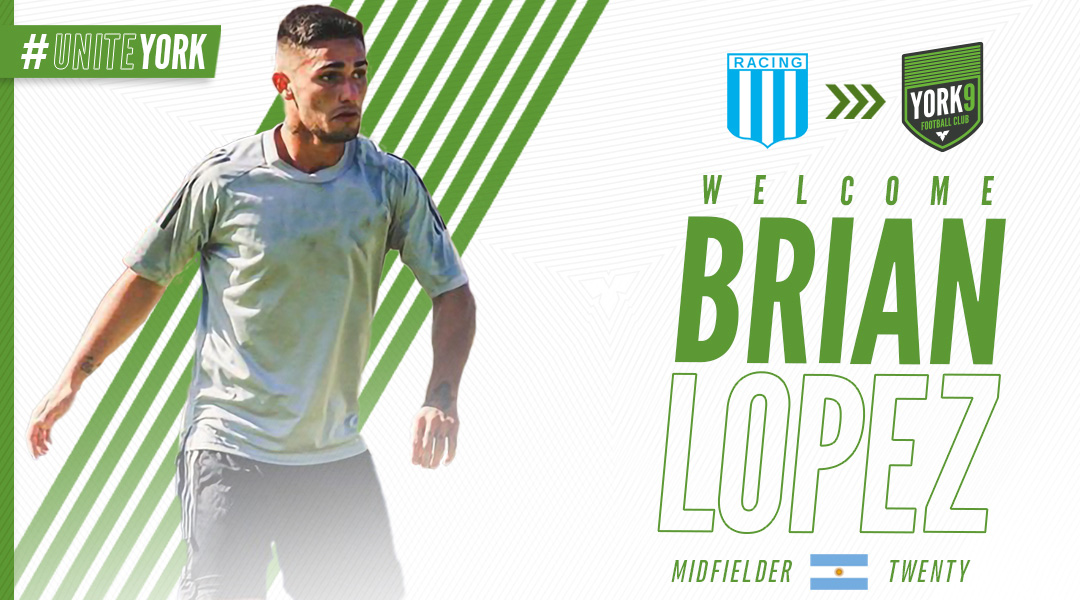 As we previously reported, York9 FC is bringing in new central midfielder from Argentina. Today, the Nine Stripes confirmed the capture of Brian Lopez from historic Argentinian side Racing Club.

The twenty-year-old midfielder has been signed to a contract with an option that runs until 2022, making him the most long-term publicly disclosed signing in the league to date. The transfer is subject to his work permit and international transfer certificate approval.


The midfielder’s move to the Nine Stripes came by virtue of sports consultant Angus McNab’s connection with Major League Soccer side Colorado Rapids, where Lopez had previously trialed:

The opportunity came to my attention during a conversation with a good friend of mine, Padraig Smith, who is the EVP and GM at Colorado Rapids. I knew Brian was on trial there in pre-season and had impressed the club both on the field and also off it.  There are a lot of factors that go into roster construction and when we became aware his trial had ended in Colorado, we moved quickly to secure him.  Our due diligence process was supported by very positive reports from both Padraig and Rapids Assistant GM, Fran Taylor.  They are two guys I’ve worked with before and really respect their opinion.

At only twenty years old, Lopez represents the York Region side’s youngest (and final) international signing of the 2020 Canadian Premier League season. While York9 FC only utilized three international spots in the club’s inaugural campaign, this time around the CPL side has filled all seven of its available international roster spots.

Lopez will join Gabriel Vasconcelos and Jaco (Brazil), Wattaru Murofushi and Fugo Segawa (Japan), Nicholas Hamilton (Jamaica), and Adrian Ugarizza (Peru) as the side’s international athletes once his visa issues are resolved. The club has had some issues with this in the past, having signed Jose Pina in the 2019 season only to have to cancel the move after months of visa difficulties.


In the assumption that all goes well this time around, the Nine Stripes will have plenty of options in midfield for the 2020 season, especially with high-profile domestic signings like Michael Petrasso and Chris Mannella. All-in-all, the quality of depth in the side seems to be in for a healthy increase – though only time will tell if the new roster can find the consistency that Jim Brennan felt was lacking last season.

York9 FC currently has 21 players on the roster. The club is expected to sign a domestic right-back depth signing in the near future to round out the squad, which means that at least one of the CPL-U Sports Draft picks – if not both – won’t be earning a developmental contract this season.

The financial terms of Brian’s contract were not disclosed by York9 FC.