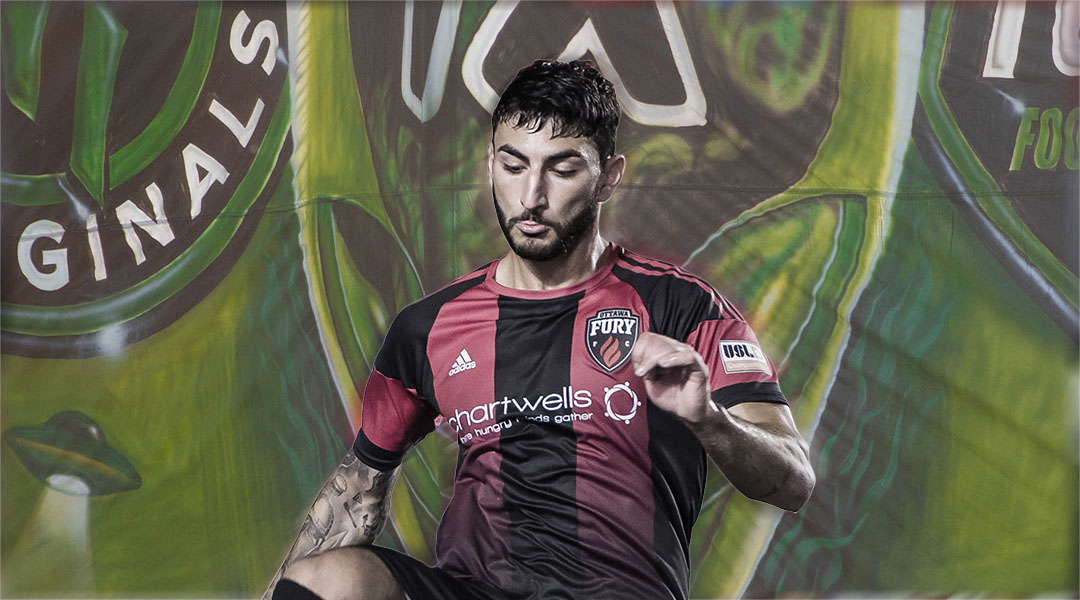 The 25-year-old centre-midfielder is coming in from a two-year stint with the Ottawa Fury, for whom he made 67 appearances. He helped the club make the USL postseason for the first time this year, and Brennan will be hoping that the former Toronto FC Academy captain can help the Nine Stripes improve on their third-place finish and reach the post-season next year, too.


As it turns out, York9 FC had been in negotiations with Mannella earlier this year, angling for a move when his contract with the former USL team was up. The York Region club was a big draw for Mannella: not only would it re-unite him with head coach Jim Brennan, but it meant a return home to Toronto and the ability to play in front of family and friends once more.

In joining the Nine Stripes, Mannella is also reunited with a familiar face in Manny Aparicio. He says the familiarity in the locker room will be an immediate help as he settles into his new club:

I played with Manny a lot. Growing up in the academy together and moving on to the first team together and playing at TFC2, we became good friends and it helped us along the way. Having his influence and having his input definitely played a factor as well, and I’m looking forward to being back on the pitch with him again.

When the Ottawa Fury folded in November, there was plenty of fan speculation that much of the club’s domestic talent could land in the Canadian Premier League. Mannella is the first of such, though it’s expected that he won’t be the last.

I was quite impressed with the league itself. For a first year league, it has done a tremendous justice for Canadian soccer and it’s helped grow the game immensely, even in one season. I was really impressed with everything from the production to the play itself. I have a lot of friends throughout the league and hearing what they had to say first hand, and how everything worked throughout the entire league, it was something that drew me into coming. I was definitely very impressed over the last year with what I was seeing on OneSoccer.

The Toronto-born midfielder becomes the club’s thirteenth player signing for the upcoming season, and its first brand new signing for 2020. Brennan has now fleshed out the core of his defense and midfield, parting ways with six players to make room for such improvements.


The turnover is much smaller than what fans have seen on the east coast with the Halifax Wanderers, who parted ways with sixteen players. When York9 FC takes to the pitch next year, several key figures will be playing with a sense of familiarity with their squadmates that simply wasn’t possible in 2019. Mannella is impressed with what he’s seen from the re-signed roster:

It’s good – it’s very good. I was really impressed, even from the chats I had with Jimmy himself. If you look at any successful team around the entire world, what they do is that they keep a core group of players together that have been consistent enough to earn the right to be on the squad, and that’s what Jimmy has done. He’s looked at the roster and he’s kept a good core group of players who have done well, and it’s really positive because the camaraderie and the chemistry that is built throughout a season is massive, and if you can keep as many of those players that you can and add the pieces to the puzzle that you think were lacking, it’s important to the success of a club.

Fans should expect to see Mannella operate in a centre midfield role, though his time at the Ottawa Fury saw him answer the call for defensive duties when required, too. He’d made several appearances as a defensive midfielder and even as a centre-back while in the nation’s capital, and while he says he’d perform those duties with a smile on his face if Brennan needs him to, he’s there as a midfielder first and foremost.


To that end, fans can expect to see him help aid the club’s philosophy in playing attacking-oriented football with plenty of movement. Jim Brennan established this identity throughout the inaugural campaign, though the club certainly went through some growing pains as players adapted to the system.

With three appearances for the national team and a solid track record of club performances, Brennan believes Mannella can help the Nine Stripes get consistent results while maintaining his preferred style of play:

We’re really pleased we were able to get him. He’s a great player on both sides of the ball and he’s got a strong pedigree for a young player in Canadian soccer. His distribution abilities will really help us move forward playing the style of football we want to play.

The club’s most recent signing now means that the York9 FC midfield is currently composed of Mannella, Di Chiara, Murofushi, Aparicio, Porter, and youngster Estevez. The Nine Stripes have remained quiet on the status of former Toronto FC loanee Ryan Telfer, who had his 2020 option declined by the Major League Soccer side. While Brennan had said he’d love to see Telfer back, the future of the 25-year-old Trinidad and Tobago international remains unknown.

In any event, the signing of Chris Mannella will be seen as a big acquisition for the York Region club. Mannella arrives as an impressive domestic midfielder with ample professional experience, good distribution, and a drive to win. Whether he can help the CPL side build the consistency that it lacked last season remains to be seen, but his signing is certainly a good step forward towards it.

Mannella has signed on for a one-year contract. Financial details of the agreement were not disclosed by York9 FC.