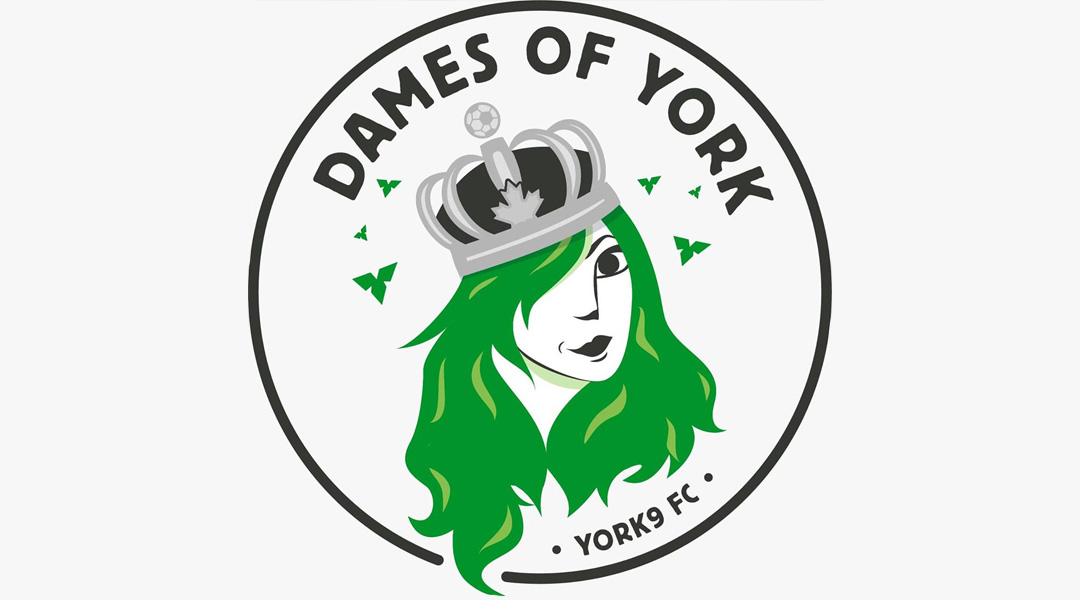 The 2020 home kit reveal hosted by York9 FC will be remembered for more than just the introduction of the club’s new look and the signing of Aurora FC youngster Max Ferrari: it was also an important first step in the creation of York9 FC’s first female supporters’ group, Dames Of York.

The idea stemmed from Stefanie Morra, a female York9 FC fan who attended her first York9 FC game last summer and recognized a lack of women in the crowd. Speaking with the CanPL Editorial staff, the fan revealed that it was in this moment that the seed for Dames of York was planted:

I’m here and I don’t see women. I thought, ‘we need more women in this stadium.’ I wanted something I can be part of where I can be comfortable in. There was nothing, so we made it.

That first match was far from her last, and so Morra spent much of the kit launch introducing herself as ‘the only woman you saw in the supporters section’, which was enough for most tor recognize her. Linking up with another female fan in Marcella Hatmanu at the 2020 kit launch, the duo began reaching out to other female supporters and revealed their plans to found the Dames of York:

York9 players were this weird mixture of totally happy but stunned. I heard a lot of ‘this is unheard of, there’s nothing like this, it’s so needed.’ Everyone was so amazed but all I could say was, ‘I don’t know, I just want to feel more comfortable in the stadium’. Ultimately, if I’m coming back to the stadium as a season seat holder, I want to improve my experience from last year.

The founders plan to grow the group’s numbers by organizing some awareness events this March as the second-ever season of the Canadian Premier League draws near, with Morra suggesting some face-time with female football fans in places like Vaughan Mills, subway stations, and the Ontario Soccer Centre.

York9 FC has also curated a sign-up sheet for Dames of York which will allow the officially-recognized supporters’ group to have easier access to existing York9 FC fans who identify as women.

People get the feeling that soccer is for men, by men. Screw that. Having us out in the community with this club will change that for fans. There’s fun to be had and it doesn’t have to be wild, male-dominant. It can be a different experience, as long as you show up. We don’t want to be intimidating at all. Ultimately, we want to make it more accessible. Break down those old-school walls and see what happens.

The club did more than offer recognition and a sign-up sheet for potential members, too: upon hearing about the initiative, York9 FC spots consultant Angus McNab assisted the duo in creating a logo and brand for the group. This week, that logo made its online debut, and word about the supporters’ group has quickly spread from coast-to-coast as a result.

When I met Stefani and Marcella at the home kit launch and they explained what they were looking to do, supporting them in launching the Dames of York became a priority. We gave them assistance in creating a logo/brand for women to unite behind in their support of the club but that’s only the first step. It is critical we help them grow the group’s membership as we have for the Green Lions. Everyone at the club is delighted to welcome the Dames of York and recognize them as an official supporters group as we have with Generation IX and the Green Lions. It’s fantastic to recognize their formation on International Women’s Day as we also announce some other fantastic initiatives.

While Generation IX is known for bringing the noise, flags, and smoke bombs that contribute to a European-feeling atmosphere at York Lions Stadium, Green Lions is a student-based supporters’ group aimed at making a community out of the local York University students during their time in the area. In collaboration with the Green Lions, York9 FC is offering students a reduced season ticket price of $125 for fifteen home games and an annual OneSoccer subscription, too.


York9 FC has also announced a celebratory event in honour of the Dames of York, with the York Region club hosting a Women’s Football Night on July 24 during a home match against Atletico Ottawa. The club is partnering with all-girls soccer club Brams United for the matchday ceremonies, with Canada Soccer supply an all-female officials crew.

McNab hasn’t shied away from his belief in that the York9 FC matchday experience has room for improvement, and organizing community events like Women’s Football Night is a big part of that positive change. There will be other events to come at York Lions Stadium, but McNab wasn’t ready to fully reveal them yet – though he did suggest that there may be events like a Brazilian food night to celebrate signings like Vasconcelos and Jaco, with other community initiatives still in the works, too.

Whatever 2020 holds, the Dames of York will be there to help produce a more inclusive environment for female fans of the beautiful game, and that’s a win-win for everybody.