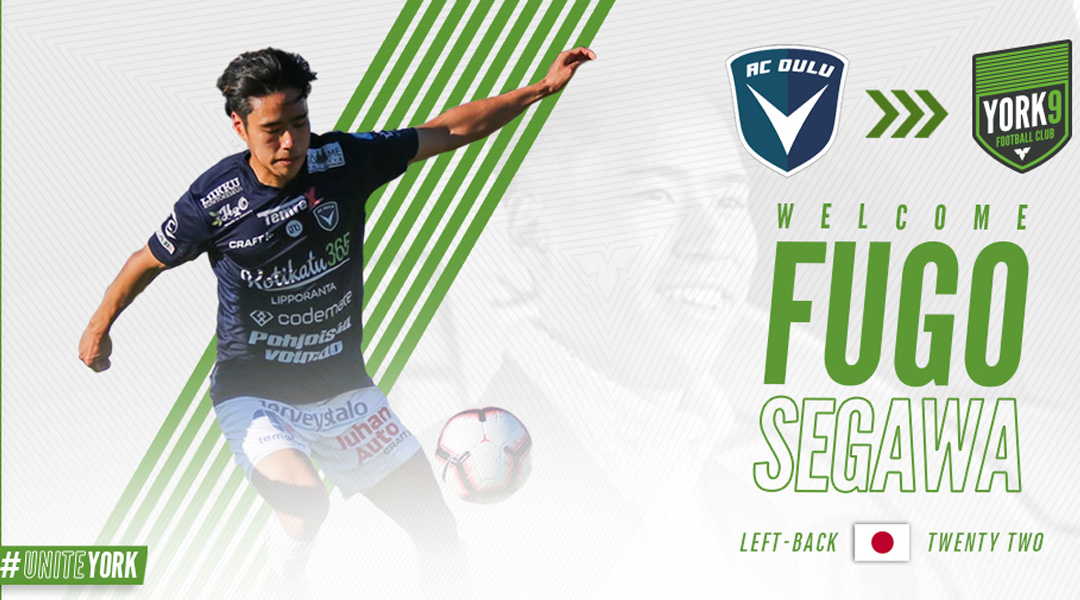 Canadian Premier League side York9 FC has added Japanese defender Fugo Segawa to its roster ahead of the 2020 season.

The Ichikawa-born defender joins the Nine Stripes after spending the last three years in Sweden and Finland, where he accumulated over fifty league appearances for the likes of Ange IF, PEPO Lappeenranta, Rovaniemen Palloseura, and AC Oulu, the latter two of which play in Finland’s top division.


Standing at five-foot-eight, club gaffer Jim Brennan explains that the left-sided defender will contest for the left full-back position currently occupied by Diyaeddine Abzi, the former AS Blainville product who wowed fans and pundits alike last season as he cemented himself as one of the league’s top left-backs in his first-ever year of professional action.

Fugo loves to get forward; he’s got a great left foot and bags of energy. He gives us another option on the left-hand side. Diyaeddine Abzi cemented that position last season, he was good going forward and defensively, he’s improved an awful lot, but we need players to come in and fight for positions, and this is going to get the best out of Abzi and Fugo.

Segawa is the fourth brand new signing for York9 FC this offseason, and the club’s third international. The Nine Stripes have retained the core members of its roster, while also strengthening its midfield with the likes of Chris Mannella, Michael Petrasso, and Brazilian winger Gabriel Vasconcelos.

The club confirmed the re-signing of Japanese midfielder Wataru Murofushi last December, meaning that Segawa won’t be the only Japanese-speaking player on the Nine Stripes roster. To that end, Brennan expects the 22-year-old will have no problems settling down in the York Region.

Fugo is a very good player. He’s travelled and he’s cultured, so we’re confident he’ll be able to settle in Toronto and do well for York9.

York9 FC rose to a third-place finish in the fall season, with club captain Manny Aparicio adamant that the York Region side can take home the North Star Shield in the 2020 season.


While it looks like the left-back spot is still Abzi’s to lose, Segawa will provide depth and competition for the spot throughout the season. The financial compensation due to Segawa was not disclosed by the club.

With its goalkeepers, defenders, and midfield nearly all sorted, it’s expected that the Nine Stripes will solidify its attackers in the near future: with Cyrus Rollocks, Simon Adjei, Austin Ricci, and Rodrigo Gattas all outbound and the future of Michael Cox still uncertain, signing his strikers appears to be Brennan’s biggest to-do. To that end, the club appears to have signed Jamaican striker Nicholas Hamilton, while former Toronto FC striker Molham Babouli has been spotted training with the club.

The length of Segawa’s contract was not declared by York9 FC.