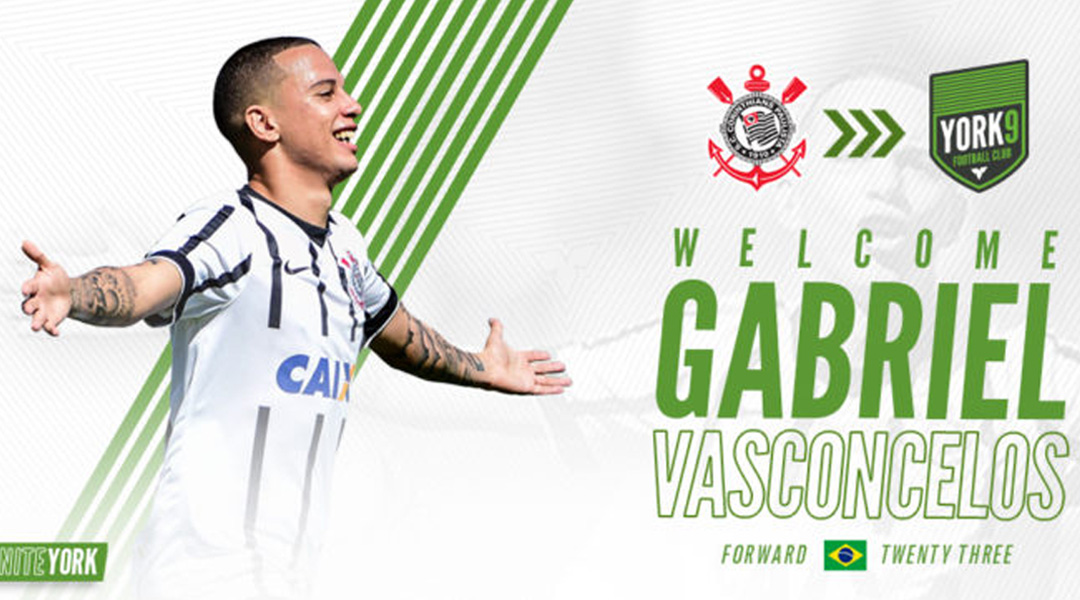 The Porto Velho-born forward spent his academy days with Brazilian Serie A sides Fluminense and Corinthians before signing a professional contract with the latter in 2016.


Despite dominating well in several domestic U-20 club competitions, his upward trajectory in Brazil faltered when he was sent on loan several times over the last few years. He was most recently with Serie B side Oeste, where York9 FC says the right-footed player made thirty appearances.

Given that the Brazilian is typically deployed out on the right wing and that Michael Petrasso is expected to be announced by the club in the near future, fans can now safely assume that Ryan Telfer won’t be back for the Nine Stripes come 2020.


Still, the arrival of a Corinthians product is sure to catch plenty of eyes. While York9 FC were able to create plenty of chances last season, the club couldn’t always convert them – and that’s an area where Jim Brennan believes the club’s latest signing can help.

He offered something different and something in attack I’m not sure we’ve seen yet. He’s great at holding a touch line and delivering a ball but his runs late into the box are excellent. He’s a real goal threat from midfield as well as being an outstanding winger. Gabriel lets us play a number of ways.

With his string of loan spells now behind him, Vasconcelos will be hoping he can carve himself some success overseas and establish himself as one of the league’s better players. Capable of playing on both sides of the wing or even as a False 9, club gaffer Jim Brennan is understandably excited to have secured the signature of a Corinthians product:

We are delighted to announce Gabriel as a new signing. It is a fantastic win for us and the league to have a player to have come up from such a prestigious youth system as Corinthians, one of the giants in South American football. He’s a very dynamic player, good on the ball, and can finish and put the ball in the back of the net. We’re really excited to have him and can’t wait for everyone to see what got us so eager to sign him when we scouted him.

Given the high level of play over in Brazil, it’ll be interesting to see how the league’s second Brazilian signing (behind Oliver Minatel of Cavalry FC) performs in Canada’s domestic professional league. Should Gabriel play to his full potential, York9 FC may found itself quite the gem.


The Brazilian forward was scouted directly as a result of the league’s partnership with 21st Club, with the CPL’s own Head of Recruitment and On-Field Analysis stating that the 23-year-old still has plenty of room to grow under the right coaching conditions.

In any event, club chairman Mike Baldassarra says his arrival is a massive statement for the Canadian Premier League itself:

I’m thrilled to have Gabriel join the club and be a part of our community. His experience coming through the ranks with two of the top teams in Brazil is incredible. I can’t wait to see him on the pitch and representing us – it is a massive statement for the league that a player like Gabriel wanted to come to Canada and play in the Canadian Premier League.”

The Brazilian forward is the club’s fourteenth official signing of the 2020 Canadian Premier League season, and the first brand new international arrival for York9 FC. The club has also brought in former Ottawa Fury man Chris Mannella, and is expected to bring in Red Stripe Premier League forward Nicholas Hamilton, too.

This week, it was confirmed that former Toronto FC striker Molham Babouli training with the club. The Nine Stripes also confirmed that it has parted ways with club president Preben Ganzhorn, with Angus McNab and his consulting agency helping to direct the club for the time being.

York9 FC did not disclose the length of Gabriel’s contract or his financial compensation.