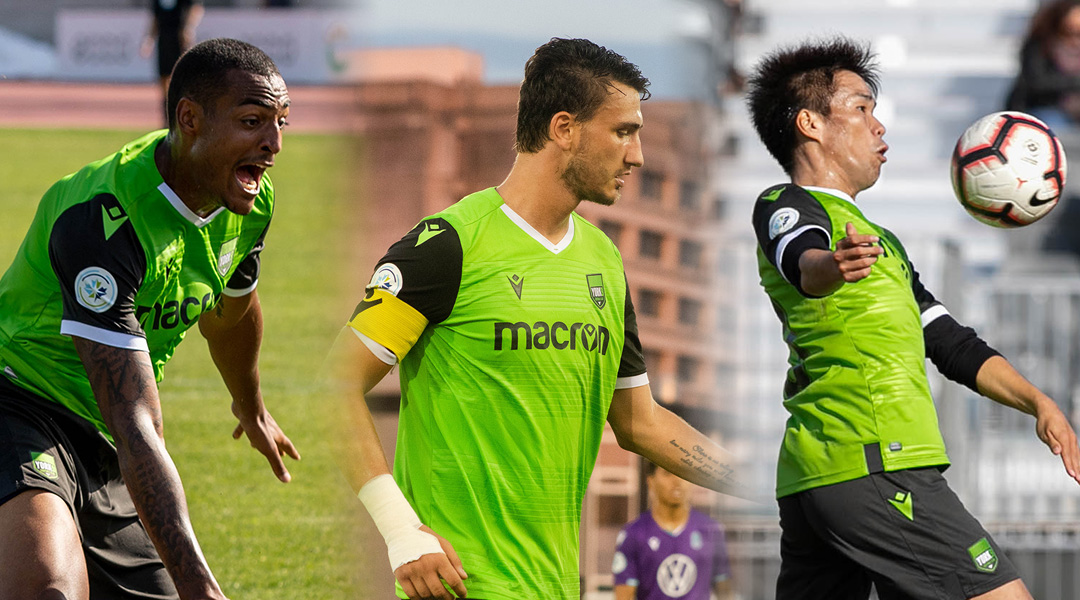 It’s been a busy week for the Nine Stripes: having just confirmed three players earlier this week, the club has now announced three more additional player re-signings for the the 2020 Canadian Premier League season.

Today, York9 FC officially confirmed that Luca Gasparotto, Simon Adjei, and Wataru Murofushi have all put pen to paper for the next season.

Here’s what club gaffer Jim Brennan had to say about the trio:

We’re extremely pleased to have this trio return for 2020. Simon really came into his own in the back half of last season, and we believe he can carry that into next year. Wataru is an incredibly technically gifted player, and he’ll continue to be such an important part of our midfield setup. Luca was obviously a key part of our defence having played every match, as well a leader on the field as vice-captain.

The confirmation that centre-back Luca Gasparotto is returning will be a big boost to Nine Stripes fans: having been the only CPL player to play every possible minute of the 2019 season, the six-foot-two defender came up big for the York Region club on several occasions. When Manny was off the pitch, it was Gasparotto who donned the armband to lead the side.

With fullback duo Morey Doner and Diyaeddine Abzi having been confirmed for 2020 just yesterday and goalkeeper Nathan Ingham having been already announced, the backline of Jim Brennan’s side is beginning to take shape. The futures of Roger Thompson and Justin Springer are still uncertain, while 22-year-old defender Daniel Gogarty has parted ways with the club.


The Nine Stripes also announced that Swedish striker Simon Adjei will be returning next year, though the 26-year-old striker had already confirmed as such on Instagram. The six-foot-four striker finished the season with seven goals, which was a bit less prolific than fans were expecting.

While he had a slow start to the spring and fall seasons, the league’s first-ever foreign signing scored four goals in his last eight games of the inaugural campaign, with Brennan stating his late-season form went a long way in the club’s retention of his services.


The club has also confirmed that another international roster spot will be used on Japanese midfielder Wataru Murofushi, who contributed three goals across 29 appearances for the Nine Stripes this year. Prior to joining the York Region club, the 24-year-old midfielder won a domestic quadruple with Albirex Niigata Singapore FC in 2018.

To that end, the future of Chilean striker Rodrigo Gattas is still unknown: having scored eleven goals for York9 FC across all competitions, the club’s top goalscorer made history as the first CPL player to score a hat-trick. He’ll leave some big shoes to fill if a return to the York Region club isn’t on the cards.


The trio of today’s re-signings represent the fifth, sixth, and seventh signings for the 2020 season, with team captain Manny Aparicio having been confirmed earlier this week. The club also parted ways with six players last month as part of its roster rebuild, though Brennan stated he was happy with the core squad itself.

While the club currently has no domestic U-21 players on roster, Jim Brennan did select two signings in the CPL-U SPORTS Draft who would help fill two of the three required Canadian U-21 roster spots, with the club hosting a local U-21 talent camp in an effort to find a third.

With nearly a third of the club’s roster space now accounted for, it’ll be interesting to see what comes next from the CPL side – especially given that it has now run two different talent scouting camps in just as many weeks.

Jim Brennan has stated that 2019’s mistakes would be rectified come 2020, with the Nine Stripes aiming to make a Canadian Premier League Finals appearance next season.