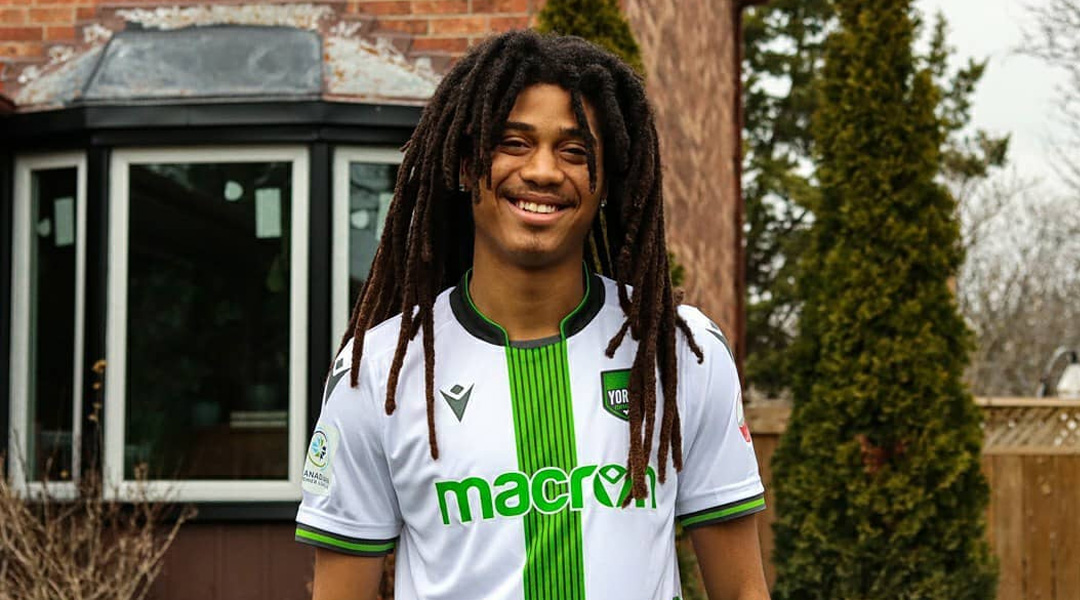 Halley Ready To Bring His Versatility To York9 FC

Ijah Halley isn’t just newest York9 FC signing: he’s the club’s youngest player, too. Despite whatever pressure comes with the title, the Brampton-born winger says he’s ready to fight for minutes in a squad which finished third in its inaugural Canadian Premier League campaign, with strong ambitions to improve on that throughout the club’s second-ever season.

When Halley does eventually play in front of a home crowd at York Lions Stadium, it won’t actually have been the first time he’s played there: he was part of the TFC Academy side that beat out the York Region Selects in the International Soccer Cup back in 2018, where Halley’s squad won the friendly tournament.

If all goes to plan, it won’t be the only medal Halley wins on that pitch – he’s an ambitious youngster.


A quick look at Ijah Halley’s own highlight reel shows a young winger who isn’t afraid to make space for himself, take defenders on, and cut inside to make darting runs. Describing himself as a right-sided winger who’s also capable of being deployed on the left, the six-foot tall athlete wants to challenge for minutes in his first year as a professional athlete.

I like to be fearless, take on my players one-v-one. Any opportunity I get to play against the defender, I salivate that and I enjoy it. That’s one of the greatest attributes in my game, you know: I like to create space and take players on. That’s my game.

While his days with the likes of Woodbridge, Erin Mills, and the TFC Academy have given him ample opportunity to provide an attacking presence, York9 FC sees something else in the 18-year-old’s wheelhouse: the potential to be repurposed into a modern-era full-back. Club President Angus McNab said as such when the side brought Halley in, citing that his multi-year contract gave the CPL side ample time to find his best position.

For Halley, the potential positional shake-up isn’t completely new territory: he’d played as a right wing-back for the TFC Academy during a previous Generation Adidas Cup tie when the young side squared up against River Plate. The youngster doesn’t have an issue with adopting more defensive duties, so long as it helps the squad as a whole.

I don’t have an issue with it, as long as I can play and help the team. It’s a team sport at the end of the day, so I’ll do whatever I can to help the team. Whatever position they put me in, I’ll try my best to flourish in it. Excel and do my thing. I see myself as a versatile player. If they want to put me as right wing back, I’ll take ownership and dominate that to the best of my abilities.

Despite the fact that York9 FC only has one season under its belt, the club already has experience in converting an attack-minded winger to a modern full-back. Last season, AS Blainville arrival Diyaeddine Abzi found himself repurposed as a left-sided full-back, and it’s an area that he found himself increasingly comfortable with as the season progressed. Similarly, fan-favourite right-back Morey Doner originally started out as a midfielder, but had already undergone the positional change prior to his arrival from League1 Ontario last year.

With the options of Halley on the right and Fugo Segawa on the left, York9 FC has depth in the event the aforementioned starting full-backs get injured or run into a patch of bad form. During the club’s home kit reveal, head coach Jim Brennan stated that the club’s newfound roster depth will provide healthy competition that he hopes will lead to more consistent results compared to the club’s 2019 campaign.


While Halley hasn’t had any in-depth chats about his potential positional change with Doner or Abzi as of yet, he states that he’s excited to chat with the full-back duo when things get back to normal. Wherever Jim Brennan puts him, he hopes that the next couple of years with York9 FC will simply help elevate his game to a higher level.

It’s a Canadian league. As a Canadian myself, I felt it would be a perfect opportunity. York9 is relatively close to my house, my home. All of those fell into place. It’s a great opportunity for me, and I’m excited.

York9 FC stated that Halley signed with a multi-year guarantee, with a club option to further extend his time at York Lions Stadium if things between the two parties work out for the foreseeable future. Halley is one of only two domestic U-21 players at the Nine Stripes alongside former Aurora FC youngster Max Ferrari, which means that club gaffer Jim Brennan will need to fill the side’s final roster spot with another domestic youngster soon in order to meet the league’s roster requirements.

With preseason having been suspended due to the COVID-19 pandemic, the York9 FC squad finds itself waiting for both health authorities and the CSA to give the green light for a gradual return to action. While some MLS sides in the US have resumed distanced training on club grounds, the CSA has yet to clear such a move for Canadian sides.

Last week, CPL Commissioner David Clanachan confirmed that the league was looking at various scenarios for a modified 2020 Canadian Premier League season. One of these possibilities includes a compacted season hosted by a single province, so Halley’s home ground debut may still be a fair distance away.