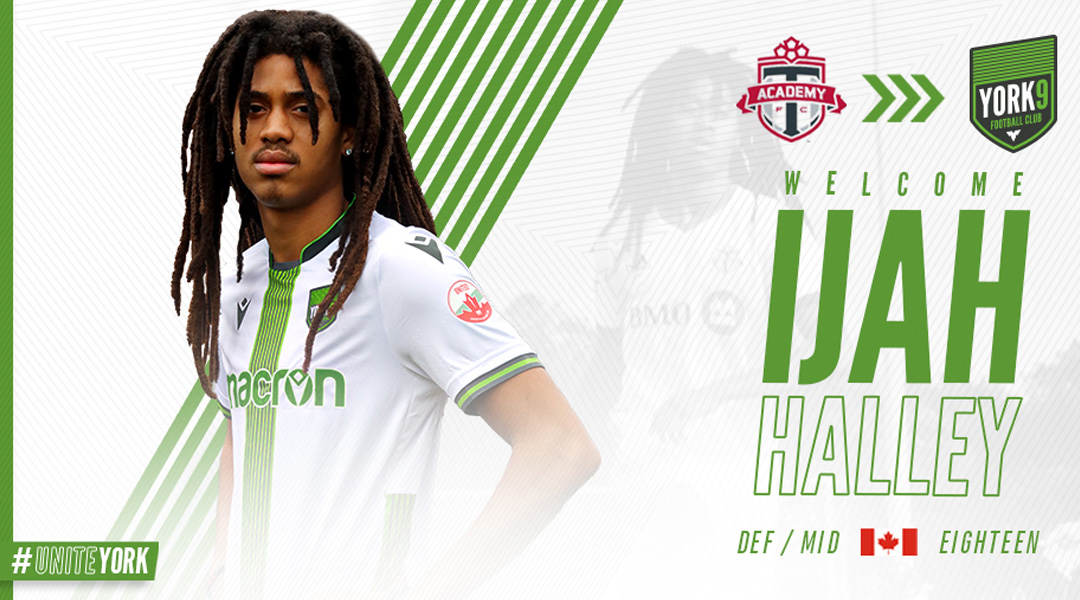 Capable of playing as both a right winger and as a full-back, the youngster arrives highly touted by York9 FC sports consultant Angus McNab, who revealed that club gaffer Jim Brennan and assistant coach Paul Stalteri had their eyes on the youngster for quite some time.


We reported that the club were due to sign a depth for Morey Doner back when the Nine Stripes announced the arrival of Argentinian midfielder Brian Lopez in early March. The club initially brought in a player from Quebec to fill in this depth role, but he was ultimately let go in favour of Halley.

Ijah is a player that we feel has great potential and the fact he has been signed to a contract with a multi-year guarantee and club options beyond that is a real show of the faith we have in him. Although he has previously played further forward, Ijah gives us tremendous versatility down the right side and he could very easily play the role of a modern wing-back. With him being with us for multiple seasons, it allows him time for development and finding his best position.

While Halley typically plays further forward than it appears he will be deployed at York9 FC, the club has already found success in the transition of former AS Blainville winger Diyaeddine Abzi. After being converted to the left-back position, Abzi was able to establish himself as one of the top left-sided full-backs in the league throughout the 2019 season.

Halley will face stiff competition for the right-back role, competing against fan-favourite Morey Doner for the starting spot. With Doner having just signed a contract extension and Halley arriving on a multi-year deal, the York Region team has secured itself several years of right-back competition – and Halley wants to make it clear he’s hungry to earn himself minutes on the pitch at York Lions Stadium.

The biggest thing I’m looking forward is that opportunity to play first team football. To be able to have that and still stay local is something super special for me and my family. I really have my parents to thank, as well as my coaches, Jack Masserelli from Woodbridge Strikers and Raphael Bell at Erin Mills for helping me develop to be the player I am today.

Halley becomes the club’s 22nd player on the roster, leaving the Nine Stripes with room for just one more signing. With all international roster spots locked down, any final signing by the Nine Stripes will be a domestic player by default. During preseason, it appeared that neither of the club’s CPL-U SPORTS Draft picks had broken into the squad.

There are plenty of Canadian MLS Academy products currently plying their trade in the Canadian Premier League, with TFC II defender Robert Boskovic recently going on loan to Cavalry FC as well.


Last season saw Toronto FC midfielder Ryan Telfer establish himself as one of the best players in the league, with York9 FC continuing its close relationship with the MLS side once again – albeit not courtesy a loan move this time around.

He’s told us that he wants to push his way into the team – this isn’t an apprenticeship for him. He wants to make the decision hard for Jimmy and compete for a spot in the team.

By signing his first professional contract with York9 FC, Ijah hopes to establish himself at the Canadian Premier League level. If he can prove himself in Canada’s domestic professional league, a move back to an MLS side could be on the cards.

It’s a career move that seemed a distant dream just a few years ago, so it’ll be interesting to see how things work out for Halley. During the club’s home kit launch earlier this year, York9 FC gaffer Jim Brennan stressed that there was more competition for spots than ever before, and Halley seems like more proof in the pudding for such a claim.


That night, the club revealed one of its other domestic youth signings in Max Ferrari, a 19-year-old box-to-box midfielder who joined the side by route of a completely different career pathway: semi-pro outfit Aurora FC.

While it’s not clear what shape the 2020 Canadian Premier League season will take due to the COVID-19 pandemic that has halted sports around the globe, the signing of Brampton’s Ijah Halley appears to be one for the future. In the short term, it’ll be interesting to see what the TFC Academy product brings to the team.

The full length and financial terms of the contract were not disclosed by York9 FC.