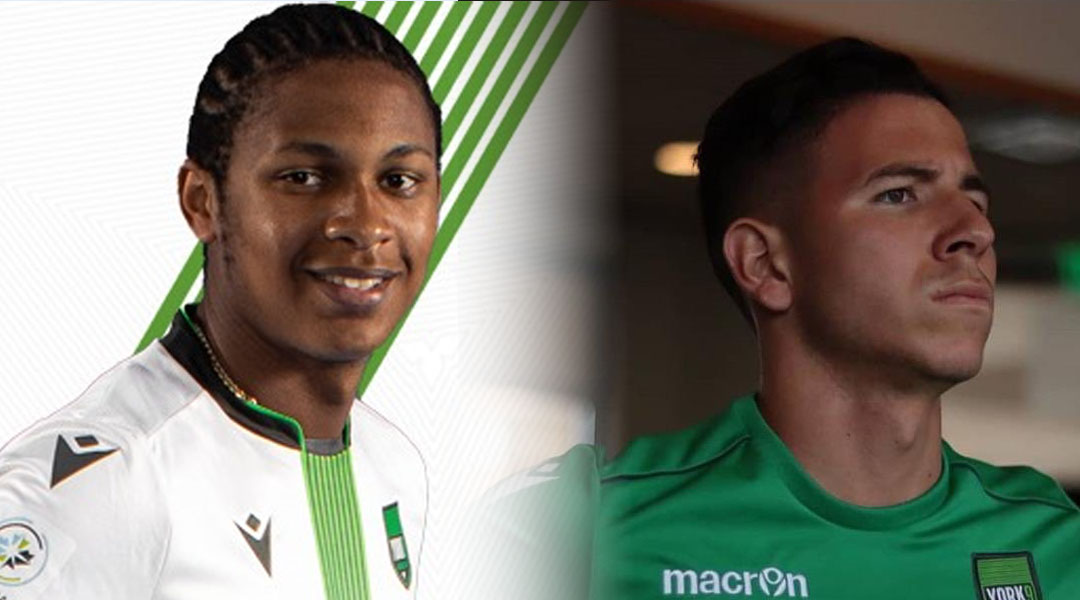 Canadian Premier League side York9 FC has fully released striker Adrian Ugarriza, who had been unable to enter Canada before the border closure prevented his arrival for the 2020 CPL season.

At the same time, the Nine Stripes have announced the signing of 18-year-old U SPORTS Draft pick Isaiah Johnston on a multi-year contract.


Peruvian forward Adrian Ugarriza, who was meant to be the Nine Stripes’ successor to Rodrigo Gattas, is ultimately a victim of the travel restrictions caused by the COVID-19 pandemic. While he was able to train with the side in Florida back in March, he did not obtain his visa to enter Canada before the borders closed.

Now a free agent, he’ll be able to join a side in his domestic league which has resumed play. He becomes the second-ever York9 FC international to be signed and released without stepping foot in the country after Jose Pina.

We are really disappointed that Adrian will not be joining up with the squad. After [he approached us], we explored every option. We chatted to Adrian and his representatives and it became clear the best chance he had to take to the pitch in 2020 was back home in Peru. With the current COVID-19 situation a loan did not look attractive to clubs in Peru so the decision was made to release Adrian from his contract. There is a human side to this, and at his age he needs to play and we can’t offer that right now. It is a very unfortunate situation and we thank Adrian for his professionalism and maturity – the way he represented himself he will be an asset wherever he goes. York is his club now and I still hope one day he can represent the Nine Stripes.

In turn, the club has now signed Milton local Isaiah Johnston, who had also taken part in the club’s 2019 Punta Cana-based preseason. The youngster was York9 FC’s second round pick (10th overall) in the 2019 CPL U SPORTS Draft and one of many league selections to hail from the Cape Breton Capers. Last year he won a national bronze medal with the side, claiming the Atlantic University Sport Rookie of The Year Award, too.

Johnston had trialed with York9 FC earlier on, but was originally turned down for a contract. With the COVID-19 pandemic forcing the Nine Stripes to re-adjust its roster, the 18-year-old has an unexpected chance to prove himself once more in the 2020 CPL season.

Being able to sign my first pro contract while still being able to play near my hometown is a huge deal to me. Especially because my family and friends can continue to be there to support me through this journey. I am excited to grow, learn and develop under some of the best Canadian players.

With Argentinian central midfielder Brian Lopez still stuck in his home country, Johnston will be hoping to fill in the extra spot in a crowded York9 FC midfield – though the youngster can play elsewhere, too. With Brian signed to a multi-year deal, it’s unclear what the Nine Stripes plan to do with the foreign signing in the meanwhile.


While Johnston’s arrival is due to unusual circumstances, the Nine Stripes have given the youngster a multi-year deal, which they also did for former Toronto FC Academy youngsters Julian Altobelli and Ijah Halley.

We are delighted he has chosen to sign his first professional contract with the club. I’m sure he’s going to thrive in our environment, and we’re delighted to secure him on a long-term deal.

The Nine Stripes currently have twenty-two players on the roster, having recently made the high-profile re-signing of former Toronto FC midfielder Ryan Telfer. The club is currently in the second phase of preseason training, with the Canadian Premier League having yet to announce when or where the modified, shortened season will take place.

York9 FC did not disclose the financial details or actual length of Johnston’s contract.