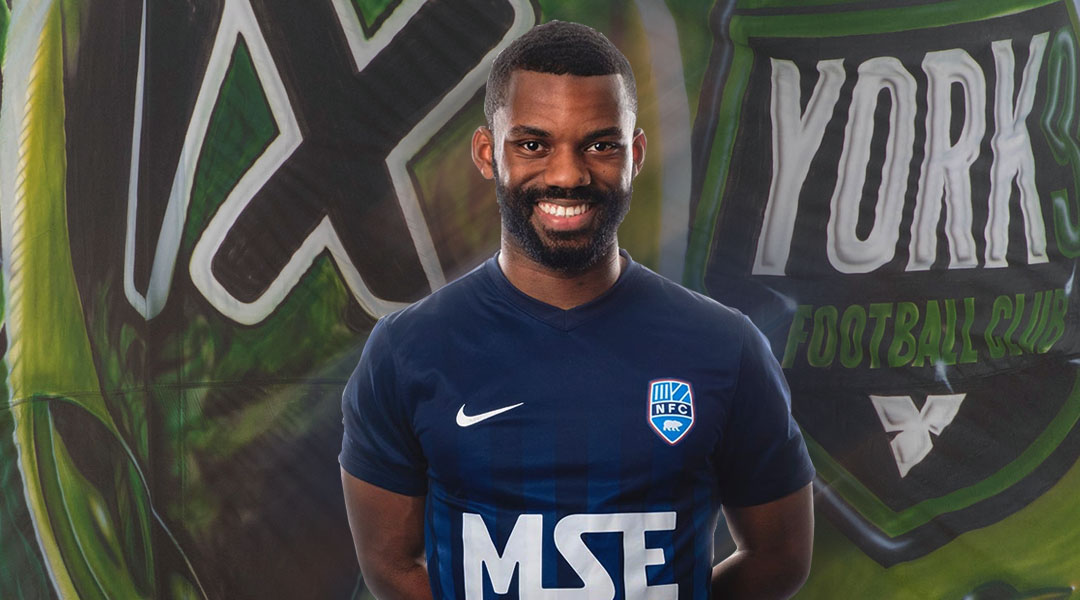 Transfer-heavy side York9 FC has signed its fourth brand new player of the month, bringing in 28-year-old defensive midfielder Jordan Wilson on a multi-year deal which includes options for 2022 and 2023.

Wilson spent the last several years deployed as both a centre-back and a defensive midfielder, proving capable in both positions. He appears set for a more midfield role with York9 FC, with McNab stating that he can play as a six or an eight. Following the rumours of Joseph Di Chiara’s departure, Wilson looks set to be a possible replacement for one of the club’s top players.

The veteran athlete has spent the last five years with Danish third tier side Nykobing FC, where he was a regular starter for the side and captained the Falster-based side on a few occasions. After nearly 150 appearances for the side – where he has seen both promotion and relegation – he now has a chance to play professionally in Canada for the first time in his career.

With the Nine Stripes expected to undergo a moderate amount of change this offseason, Club President Angus McNab hasn’t wasted time in finding new player additions for the upcoming season: internationals Julian Ulbricht and Mateo Hernandez are slated to arrive next year, while domestic signing Ryan Lindsay may be joined by Valour FC Captain Dylan Carreiro – though the Toronto-based midfielder isn’t a lock quite yet.

Here’s what Angus McNab had to say about the club’s newest addition:

Jordan is an exciting addition to the group. He has spent his professional career overseas but is so energized and passionate to come home and contribute to the growth of the Canadian Premier League. We had a couple of great conversations and it became clear he bought into what we want to do here and was a good fit for us. He has the versatility to play as a six or eight and even at centre back. That’s important as we look at finding the right team chemistry and driving this club forward. Most impressive was his desire to give back and play a huge part in our work in the local community. He believes in the promise of Canadian Premier League soccer and the positive impact it can have across the country in growing the sport.

His versatility as a centre-back is likely to come in handy, too: two weeks ago we made mention that Luca Gasparotto’s time at the club may be ending following a contract negotiation breakdown. With the club signing both young defender Ryan Lindsay and the more experienced Jordan Wilson this week, it’s certainly looking like the club’s iron man and all-time appearance leader is set to depart from the club, while depth option Matthew Arnone is also expected to depart.

With the futures of Chris Mannella and the aforementioned Joseph Di Chiara uncertain, Wilson finds himself capable of playing in multiple positions where the Nine Stripes need a veteran presence.

Goalkeeper Nathan Ingham is also likely to stay after a tough 2020 campaign, though it appears York9 FC may be securing itself a more experienced second-choice goalkeeper over teenage prospect Ezequiel Carrasco.

In terms of other defensive talent, full-backs Diyaeddine Abzi and Morey Doner have already re-signed for the 2021 season. Japanese left back Fugo Segawa took over left-back starting duties at the tail end of The Island Games campaign with Abzi then deployed directly as a winger, which is a theme that could continue into the new year.

It’ll be interesting to see how Wilson slots into playing at the Canadian Premier League level, and what position he ultimately slots into. With McNab suggesting a more midfield-dominant role, it appears Wilson is set to succeed Joseph Di Chiara in the middle of the park.

York9 FC did not disclose the financial terms of Wilson’s contract.